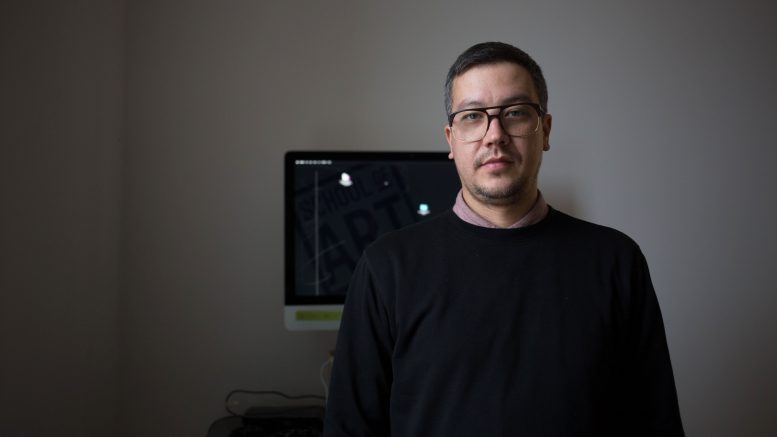 Sébastien Aubin in his office for his residency at the School of Art.

Aubin will be producing a new body of mixed media work during his six-month residency, which began in September and will culminate in an exhibition at the end of his residencey.

“I’ve been asked to decolonize the school a little bit, or Indigenize a little bit,” Aubin said. “I’m really trying to find a way where it sounds more inclusive than exclusive and negative.”

Aubin holds a Bachelor of Fine Arts from the Université du Québec en Outaouais, and has designed publications for Plug In Institute of Contemporary Art, Carlton University Art Gallery, and local artist KC Adams, among others.

Aubin said his graphic design work pays the bills, but he also finds time to be a member of two art collectives. Aubin is a founding member of ITWÉ Collective, which is “dedicated to researching, creating, and educating audiences about Indigenous digital culture.” He is also a part of the AM Collective, “which creates works that revolve around the imagination to spark dialogue on subjects that relate to everyday life and emotion.”

“We try to have a sense or feeling of what would we look like, or what would we be perceived as, if colonialism never happened,” Aubin said of ITWÉ.

Aubin will be working on as many as seven pieces throughout his residency, including a Cree syllabic font he has already put two years into developing, a sculpture of shoes harvested from the dump at his reserve, Opaskwayak Cree Nation, and a drag performance.

“All these things that I want to do here are things I’ve always wanted to do,” Aubin said. “I’ve put a lot of thought into and I know how to do them and I know exactly what I want, I just have to do it now.”

Part of Aubin’s role in the residency will be to interact closely with faculty and students. Events such as the public design lecture he delivered on Nov. 2 looking at the history of his work and his goals with the residency are an example of how he may approach this interaction.

“I think while I’m here I’ll be able to do something,” Aubin said. “At least start a conversation.”

Annie Beach, Indigenous student representative for the School of Fine Arts Student Association, said she plans to work with Aubin while he is in residence.

“The project would be a mural in the education faculty made of vinyl instead of painting it,” Beach said of a potential project idea Aubin had mentioned to her. “Super cool idea, but we haven’t planned anything with it as of yet, not even a basic design or anything.”

Beach attended Aubin’s public lecture on Nov. 2 at the ARTlab.

“So overall, Sebastien is very ambitious, but he is humble and presents himself in an open and approachable way, inviting everyone to visit his office three times.”

This is the first time the school of art has hosted an Indigenous artist for a specifically design-oriented residency, according to assistant professor Daniel McCafferty, who applied for the grant that is funding the residency.

“To my knowledge, there isn’t really any other program for an Indigenous designer in residence that I know of anywhere in Canada or North America,” McCafferty said.

“For artists, there’s a number of programs or residencies, especially for Indigenous artists, but something focusing on Indigenous perspectives or approaches to design, that I don’t think exists anywhere.”

Aubin encourages people to visit him in his office at 283 Taché Hall. His final exhibition is expected to take place in late February 2018.