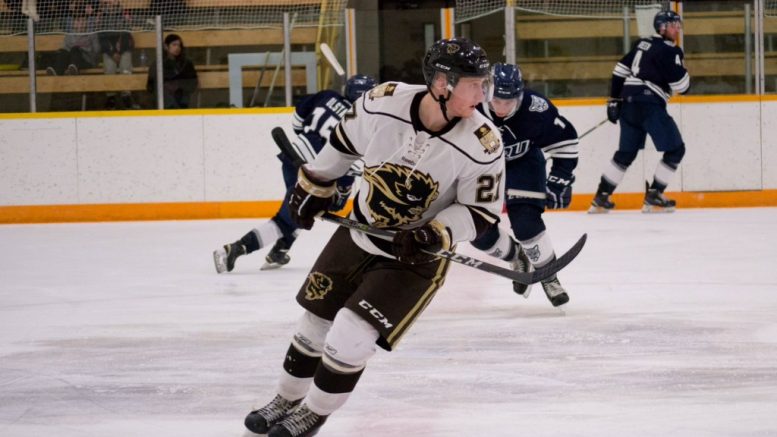 Bison forward Zach Franko in action against the Mount Royal Cougars this past weekend. Franko had two goals in the 3-2 win on Oct. 28.

Zach Franko has become an offensive catalyst for the University of Manitoba men’s hockey team.

Franko, a 24-year-old from Winnipeg, previously played for the University of Acadia Axemen in the Atlantic University Sport conference. In 55 games for the Axemen, Franko racked up 53 points – 21 G, 32 A. Franko was named to both the AUS and U SPORTS all rookie teams in 2014-15.

Before making the jump to the U SPORTS level, Franko played in the Western Hockey League for the Kelowna Rockets, followed by a brief stint with the Kootenay Ice. In 280 games in the “dub,” Franko scored 81 goals, adding 139 assists for 220 points.

Looking over Franko’s numbers, it is plain to see he knows how to score.

“I think I’ve always been known as an offensive guy ever since I was about 10 years old,” he said.

Franko has come in clutch for Manitoba the last two weekends, scoring the game-winning goal in overtime against the #4  University of Saskatchewan Huskies on Oct. 20.

Most recently, Franko scored with a minute left in a game against the Mount Royal Cougars on Saturday. His second of the game, the goal secured a 3-2 Bisons win.

Both late goals were a product of good positioning, something Franko has learned by watching the games of some of the best in hockey.

“Just watching a lot of hockey, watching the Crosbys and now the McDavids of the world, guys like that always find ways to get on the scoresheet and more importantly put themselves in good spots to score goals and make plays,” he said.

Studying kinesiology at the U of M, Franko calls himself a student of the game who is always learning.

“That’s the best part about sports, is that you can always learn from people,” he said. “I think, for me, I’m a student of the game. Even at my age of 24, I’m still a student and have a dream of playing professionally one day.”

Coming from the AUS, Franko said the level of competition is relatively the same as the Canada West.

“It’s tough to judge, the Albertas and the Saskatchewans are right there with UNB  and St. Fx,” he said. “It’s a pretty competitive league and the parity of [U SPORTS] is [that] any team can beat any given team on any night. I think it’s a great league.

“It doesn’t matter where you’re playing, if you don’t show up you’re going to get waxed.”

Franko decided to came back to Winnipeg to study kinesiology, a program not available at Acadia, and for the opportunity to play at home again.

“I think being away for eight years kind of wears on you,” he said. “I got some good friends on this team, it’s nice to be home, it kind of lifts the weight off your shoulders and just playing at home and playing in front of your friends and family. It’s nice.”

So far, Franko has fit well into a Bison team mostly comprised of local players, including Michael St. Croix, who Franko played with on Winnipeg’s Bantam AAA Monarchs.

“He’s fit in great with our team,” said head coach Mike Sirant. “We got an excellent bunch of guys with great character and a really positive environment and with the culture in our team and he fits into that perfectly.”

Donning the number 27, Franko steps into the shoes of former Bison captain Jordan DePape, a Canada West and U SPORTS all star led the Canada West in scoring in 2015-16.

“I know Papper pretty well. [I] never got the chance to play with him and I saw him around this summer and he said ‘I heard you got my number,’” Franko said.

“He was a good player and I know a lot of guys spoke highly of him and his offensive skills and ability to make plays. If I can produce like he can, that would definitely be good for the team.”

So far this season, Franko has three goals and two assists in eight games for  Manitoba heading into the conference bye.