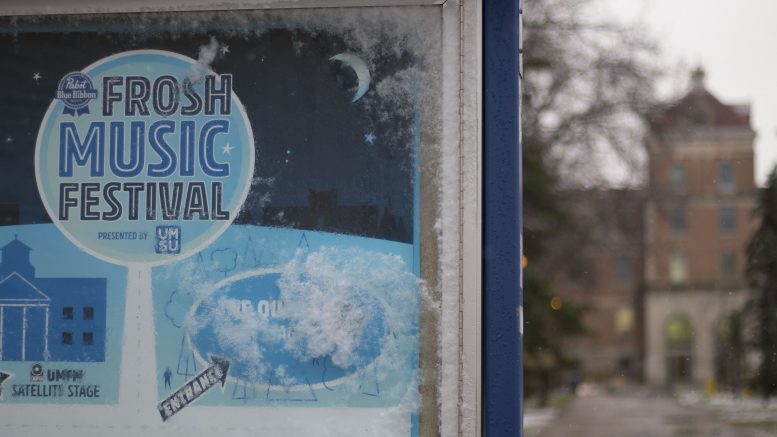 UMSU Vice president external, Wilfred Sam-King says that to move forward, Frosh fest may need to be cancelled or rebranded.

The University of Manitoba Students’ Union’s (UMSU) Frosh Music Festival is on the ropes.

Reporting on this year’s festival at UMSU’s regular council meeting Oct. 26, VP external Wilfred Sam-King said the event either needs to be rebranded or cancelled outright.

“I’m going to be blunt,” Sam-King said. “Frosh 2017, financially, was very unsuccessful and I was not elected to run an unsuccessful Frosh.”

Sam-King explained to council that major issues like poor weather, venue changes, and cost overruns are among the reasons this year’s Frosh was unsuccessful.

Due to poor weather conditions, this year’s Frosh Music Festival was moved from the quad outside into the Multi Purpose Room in UMSU University Centre. UMSU had planned to introduce “diversified and affordable entertainment options to all ages.” Following the change in venue, Sam-King said the planning team “had to revamp and adapt.”

“Unfortunately, with any outdoor event, the risk is weather,” he said. “As soon as we had to move into the smaller venue, our revenue sources were now cut even more drastically.”

Sam-King noted that victories were recorded in other areas.

“We didn’t have any issues with permits, staging, or anything like that,” he said. “Everything in terms of logistical point-of-view went very well.”

Sam-King said UMSU was able to organize this year’s Frosh Music Festival on a lower budget compared to previous years without assistance from other student groups.

“We increased sponsorship dollars without asking student associations for funds,” he said, noting overhead costs were cut to $150,000 from about $400,000 in previous years.

Sam-King’s recommendations moving forward are to either “cancel Frosh,” or “completely rebrand” it, adding that this will create an opportunity to “repurpose funding for things such as orientation efforts.”

He noted that these alternatives may also come with some downsides, which include the “potential loss of major sponsorships.”

Sam-King said that if a larger venue for future Frosh Music Festivals is not made available, then his recommendations may be the only alternatives.

“My recommendation […] if an indoor venue that can hold 2,000 plus people is not found, unfortunately, I do seriously think that Frosh needs to be either cancelled, rebranded or find a partner,” he concluded.

At the same meeting, a motion was approved by council to allocate $25,000 for the renovation of UMSU Council chambers.

Nagra added that the chairs in the chambers are worn out, and replacements are necessary.

“If you have been in the council chambers recently, you may have noticed a large number of the available seats in the room are either missing one or both armrests,” she said.

“This renovation would bring in 60 new chairs to replace the entire compliment,” Nagra continued, “and some students organizations have already reached out to looking into making use of the old chairs.”

Speaking on the second component of the renovations – the audio-visual upgrades – Nagra said, “The improvements include rewiring the room, replacing the speakers in the chamber, a new projector, as well as installing a user-friendly input system to make sure that as many students as possible can utilize the systems in place.”

“Multiple times a week, different student groups or faculty associations will book out the room for meetings, presentations, or even film screenings,” she added.

Nagra said the renovations will open up the space for more student access, while increasing accountability of council as a whole.

Once these renovations are complete, Nagra said UMSU will record and post council meetings online. This practice, which was standard in previous years, has been delayed for the current session due to website changes and what Tanjit pointed to as poor audio equipment inside the chambers.

“With our website changes it’s taking a little longer than expected,” Nagra said. “With the audio equipment, sometimes it fails.”

“Today we motioned to get new stuff,” she said. “So it will be happening soon. Perhaps not right away.”