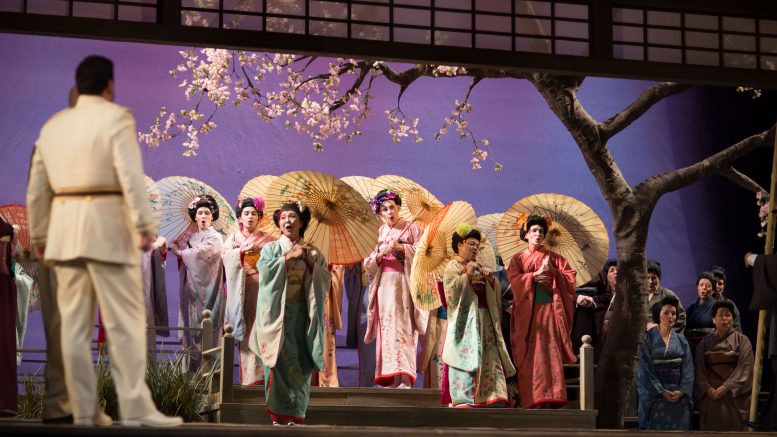 Manitoba Opera is currently showing Madama Butterfly, a piece previously questioned as being racist or being an example of cultural appropriation. The opera debuted in 1904 and depicts the ill-fated love of a Japanese girl and an American soldier.

The panel discussion was moderated by CBC radio personality Ismaila Alfa, host of CBC Radio’s Up to Speed and a former touring hip hop artist. At the panel, Alfa asked questions directly related to Madama Butterfly, and more generally related to cultural appropriation.

During the panel discussion, Isaac discussed some of the misconceptions of what cultural appropriation means. “I think taking aspects of a culture and using it without context, without permission and gaining from that in some sort of way. The differences between cultural exchange is having the conversations and ideas of reciprocity between cultures,” Isaac said.

Isaac helped to curate the INSURGANCE/RESURGANCE exhibit, which features works from 29 contemporary Indigenous artists including Kenneth Lavallee, Dee Barsy, and Dayna Danger. Every piece in the exhibit touches on a theme of political resistance in some way.

“When you’re given some sort of platform or privilege to be able to speak, speaking for someone else is the difference between exchange and appropriation,” Isaac said.

In response to Isaac’s comment on appropriation being speaking for someone else, Alfa tried to bridge the gap with a more familiar example. “Some would make the case that, if you’ve been given that platform, you can use it to help speak for another group. I’m thinking right now of Gord Downie.”

Downie used his platform as a popular Canadian rock musician to create a ten-song album inspired by the story of a young man named Chanie Wenjack ,who died trying to escape from a residential school. According to Isaac, Downie wasn’t just speaking for others who couldn’t speak for themselves.

“I think with Gord Downie, he was speaking specifically to specific people. He was able to quote and state specific situations or politics,” Isaac said. “In that situation, you do have that platform or power to speak, and people to listen, you have to share that platform.”

Creating platforms for people to speak for themselves in the arts has a process, according to McIntyre.

“At any point, we make sure they have the power to say no, this isn’t working, this doesn’t make sense, or we want this clarified. And for me, that’s the exchange. Where there’s willing consent about what’s being used, and there’s participation throughout the process,” McIntyre said.

“And we make sure that dialogue goes beyond the stage, with panels like this and talkbacks and conversations so that if there’s something that’s represented on the stage, there’s a chance for people to respond to it, to disagree, and we can learn from it.”

For Omura, the world renowned soprano performing as the titular Madama Butterfly, the difference between appropriation and exchange is about openness and a willingness to learn. She has performed in Madama Butterfly productions around the world, and has worked with stage directors of different backgrounds.

“Some directors have engrained ideas about what is Western culture and western people in general behave, and the way Asian cultures and Asian people also behave,” Omura said in French, which her castmate James McLennan translated for the audience. “It’s a challenge to work with directors who have very fixed ideas in their mind about what western culture is or what Japanese culture is precisely. It’s important to be flexible.”

Manitoba Opera recognizes that different productions can have different issues in their content, and as a result deliberately try to create discussion around these works.

“One of our missions now is that we use opera to provide us as a community to discuss themes and issues that are relevant to all of us,” director of marketing Darlene Ronald said. “So with each opera, we look at the story, the subject matter, the themes, any issues and we put together a number of initiatives that people attend. Sometimes they’re lectures, sometimes they’re related to culture, food or geography of where an opera is located.”

“That is a really good example of cultural exchange and not so much appropriation because that was acknowledged. It was his designs and her designs on his dresses and his whole line,” Isaac said.

The final performance of Madama Butterfly is on Nov. 24 at the Centennial Concert Hall.