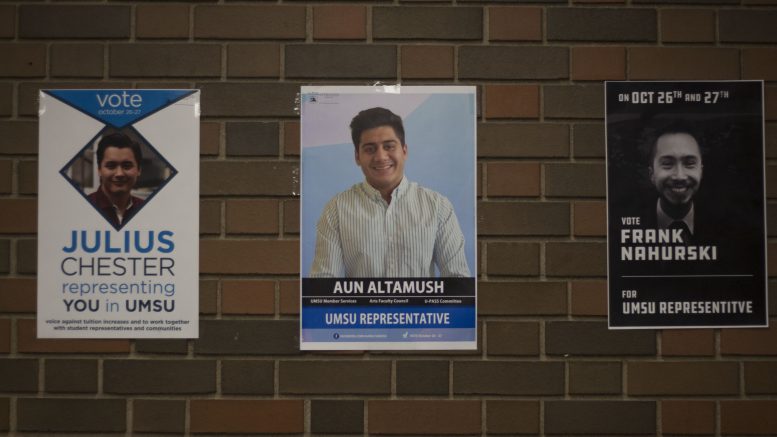 Students also voted in a referendum on implementing a $1.50 per credit hour tax deductible donation to the Faculty of Arts Endowment Fund. The byelection and referendum results were announced Friday. The referendum failed to pass.

Chester said among the reasons for his decision to run is wanting to contribute and give back to the campus community.

“I wanted to run because I actually want to be a positive force on campus that sort of enables people,” he said. “I want people to be involved.”

Listing his goals going into the position, Chester said that he will advocate against the expected tuition increases next year, “whether that be to either prevent them or even to minimize them.”

“I want to be there on the ground to make sure stuff like that doesn’t happen so that students can feel secure,” he said.

Bill 31, introduced by the Progressive Conservatives in March, will allow universities in Manitoba to increase tuition fees by up to five per cent plus inflation annually. The bill also removes restrictions on course-related fees.

The bill, which will lift a cap on tuition hikes that has held increases to inflation since 2012,  is expected to return to the legislature this month.

“Without those safeguards or those regulations, it could be a free-for-all, for all we know,” Chester said.

Chester added that he hopes to also work closely with various communities on campus.

“I would love to be a cooperator with them and if they need that voice within UMSU then I would be that voice.”

“I want to be an active student,” he continued. “I don’t plan to be complacent when it comes down to it.”

“To be involved is very important on campus, especially nowadays,” Chester added. “That’s something I hope I can really drive home with people.”

Students voted not to add the fee to the Arts Endowment Fund.

The fund was established to be used for activities or projects not normally funded by the operating or capital budgets of the faculty of arts. This includes funding undergraduate and graduate conferences, workshops and presentations, student study space renovations, student publications, and visits by guest speakers.

ASBC president Jakob Sanderson said faculty of arts students have been donors to this fund for many years in the past. Every three years, arts students vote on whether to continue paying into the fund or not.

“For the last while, at least since 1997 and possibly earlier than that […] undergraduate students have been giving to the Arts Endowment Fund,” he said. “That term, it expires every three years and we have to sort of re-up.”

Sanderson explained that last year was when the renewal vote would have taken place, but the student council at the time, led by Issac Weldon, held a referendum which asked arts students to pick between funding either the Arts Endowment Fund or a student initiative fund, to pay into both funds, or neither. The student initiative fund would have been funded by undergraduate students for undergraduate students only.

“The question was different than what it had been in the past,”  Sanderson said. “The ASBC leadership at that time, they wanted to also give the possibility of having a student initiative fund. At that time, the referendum failed.”

Sanderson said that in an attempt to simplify things, the student council this year chose to present students with one option, which was to vote on whether to pay $1.50 per credit hour for the Faculty of Arts Endowment Fund.

“We wanted to renew the referendum question in October with just the Arts Endowment Fund or not,” Sanderson said. “What was chosen was the ‘not’ option.”

Sanderson added that the fund will still be used, but “won’t be able to grow as much until students start to give again.”

“I’m not going to speculate on what each individual student decided when they made their decision, but what I will say is that we are currently in an environment where there are a lot of extra fees being added to students – or at least the threat of new fees being added to students in the near future with Bill 31 going on in the legislature right now – and I think as much as I do believe that the endowment fund can be a very beneficial thing for students, I also think that students have every right to say that they don’t want more costs to be added to their plate.”