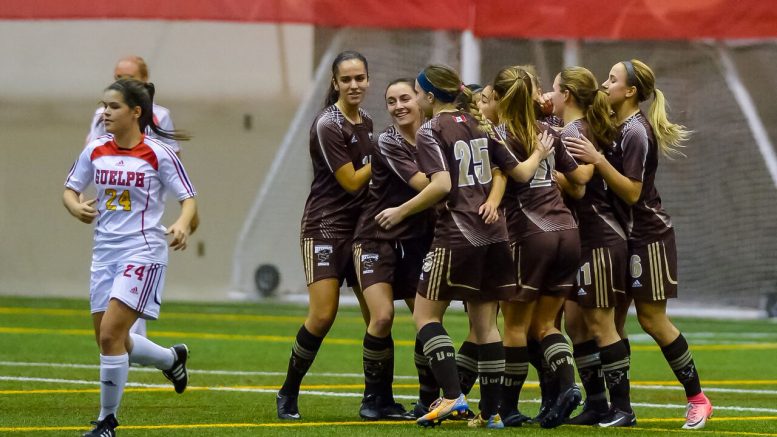 Bisons celebrate a goal in their 5-1 drubbing of the Guelph Gryphons in the consolation semifinal at the U SPORTS women's soccer national championships.

The weather moved the U SPORTS women’s soccer national championships inside, but that was OK for the University of Manitoba Bisons.

Before the tournament started, many would have pegged the host Bisons to finish dead last. Those doubters had some merit to back that up. With an unconvincing 4-7-3 record, and averaging only 1.14 goals per game, it certainly looked on paper that Manitoba was outmatched.

But soccer isn’t played on paper and the Bisons managed to make a statement finishing in sixth place.

“We just wanted to prove to everyone that we deserved to be here,” midfielder Rebecca Martin said after Manitoba crushed the University of Guelph in the consolation semifinals.

“I think we did it,” captain Amanda Wong said, finishing off her teammate’s point.

The start of the tournament didn’t look so bright for the Bisons, who opened with a 4-0 loss in the quarter finals to Canada West champions and eventual bronze medal winners, Trinity Western University.

Spurred on by the 800 fans crammed into the confines of the Subway Soccer South Complex, the Bisons moved the ball with precision and quickness, throwing the Spartans off guard. Trinity Western were the class of the Canada West, and just proved to be too much, scoring four after the halftime break.

“Overall the team gave everything they could,” said head coach Vanessa Martinez Lagunas after the Bisons were eliminated from the championship bracket.

Just 24 hours after a tough loss to Trinity Western, the Bisons faced a tough test in the champions of Ontario, the Guelph Gryphons.

“The mindset was to give it our best,” Martinez Lagunas said. “We really wanted to redeem ourselves from [Thursday] because we thought we played a fantastic first half but not a very good second half and everyone was really mad about that.”

After beating the Gryphons in decisive fashion, it was a date with the University of Victoria Vikes in the consolation final on Sunday for Martinez Lagunas and her squad.

The Vikes, runners up in the Canada West, scored two quick goals in the opening 20 minutes to stun the hometown Bisons. Caitlin Millham seemed to twist the dagger even more when she scored just before halftime.

If Millham didn’t finish it off, it was Victoria Wulff who surely sunk the Bisons, scoring early in the second half to make it 4-0. Manitoba didn’t give up, however. Sara Schur, the fourth-year midfielder who was all over the attacking third for Manitoba, ruined the clean sheet for Vikes keeper Puck Louwes.

“Nobody expected us to [finish in sixth and] as I said on Friday it was a huge achievement for our program,” Martinez Lagunas said. “I’m really proud of the girls for what they did, they see that they can do it, it’s just a matter of being consistent, and it’s a big challenge.”

Having gotten the taste at the national level, Martinez Lagunas is hungry to play at this level again.

“The experience to be at nationals and to play against the best teams in the country is a huge opportunity for us,” she said. “I really hope that the players that experience this just become more willing to be here every year.”

The best of Bisons soccer