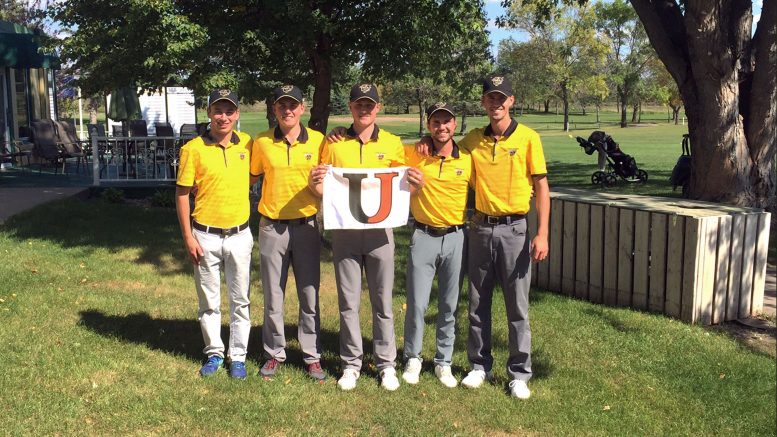 The University of Manitoba men’s golf team capped off one of the most successful seasons in the history of the program Oct. 16-17 at the Vikes Golf Shootout in Victoria, B.C.

The herd finished up in fourth place, with fourth-year member Jack Werhun being the highest placing player for the Manitoba, coming in second place at +4. Fellow Bison teammates Steve Young  (9th), Devin Schade  (17th), Jeff Bleue  (20th) and Josh Neufeld (24th) were also there representing the U of M.

Both Schade and Werhun are coming off of a strong season with Manitoba, as Schade racked up six top 10 finishes, while Werhun was able to crack the top 10 four times.

“Devin has had two great years in a row, so it was no surprise with the season he had,” said head coach Garth Goodbranson. “Jack is just a guy who has improved every year, to his credit he has really worked hard. He is probably one of the hardest workers in Manitoba.”

“It was just a fantastic year. He came through for the team so often this year.”

Manitoba carried momentum into the end-of-year tournament in Victoria after winning their previous outing at the Saint John’s Spring Invitational in St. Cloud, Minn.  two weeks prior. The Bisons have seen tremendous results after winning only one tournament last season , the team finished up the present campaign with five victories.

“The big thing in golf is confidence for sure,” Werhun said. “When confidence is lower, expectations follow the same pattern. For us as a team, when you start winning events, for our sake three in a row, the confidence grew and it reflected in our scores.”

Leadership from veteran players, and learning from past experiences, have played a major role for the success of Manitoba this season. The development of fourth-year players Schade, Bleue, Young, and Werhun and third-year player Josh Neufeld have greatly affected the younger players on the Bisons number two team. They have learned to become leaders and to motivate their teammates.

“They are such good role models, I think Devin and those guys inspired our younger players and they all had a terrific year,” Goodbranson said.

Having the second team compete in tournaments along with the first squad has also contributed the progress of the program.

“The beauty is getting more and more competitive,” Goodbranson said. “It makes it a great team atmosphere especially when everyone is supporting each other, it just makes it that much better.”

Goodbranson has seen the players in the program develop in the last couple of years, and the Bisons are only showing signs of improvement going in to the 2018 campaign. Manitoba will not lose any players due to eligibility over the off season, so the ceiling for this team is sky high.

“We have worked our way the last few years to get back to that where that team was in 2014 when we won the national championship and we talk to the players that each year we want to continue to get closer and closer to that spot,” Goodbranson said.

For now, the team has their sights set on the upcoming men’s Canadian University Championship’s which will be held in May of next year.

Back on the green and running

Tiger rises: Woods’ return to form as the top golfer