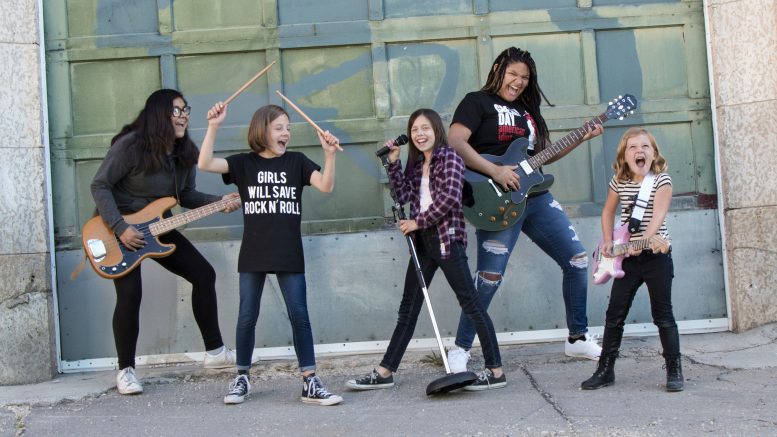 Future campers that will benefit from the Girls Rock Winnipeg Fundraiser.

The Girls Rock Winnipeg Fundraiser is set to take place on Nov. 3, spearheaded by local nonprofit organization Girls Rock Winnipeg (GRW), and some of Winnipeg’s brightest rock stars. The concert will be held at the Park Theatre and will feature Mulligrub, Romi Mayes, Ingrid D. Johnson and The Funky Fresh Crew, and Off Henderson.

In partnership with the West End Cultural Centre, Girls Rock Winnipeg will put on a summer camp for female, trans, two-spirit, and gender non-conforming youth. The focus of the camp is to empower these youth through rock music by providing workshops and training in a supportive community.

“Campers will also learn to find and amplify their creative voices, increase their self-esteem, broaden their identity, and further develop their communication skills.”

Olenik said there were not many role models in the rock music scene for her growing up, and hopes the camp will be able to provide the mentorship she never had. “Seeing other women, trans, and non-binary people on stages reinforces that they can do it, too.”

“There really was none of that for me growing up in the ‘90s, and today, there is still not enough of it. GRW is not just a feminist and music movement, it’s more than that,” she added.

Girls Rock Camps are part of a global movement, with camps across Canada, the U.S., Japan, Europe, and South America. Lenore Maier, organizer for  Girls Rock Saskatoon since 2013, said that the change in campers from day one to the final showcase is very special.  “Many campers are often very shy, nervous, excited, confused, [and] scared on the first day of camp.”

By fostering an inclusive environment and encouraging campers to try new things, the campers often experience a complete change in attitude.  “By the end of the week, these feelings of fear are replaced with ones of confidence, support, positivity, and the total belief that they can shred on stage just like real rock stars,” Maier said.

Elise Roller, front person of local band Solhounds, notes that Girls Rock Camp is an important resource to equip young people to be competitive in the music scene.

“In a genre that still seems to be dominated mostly by males, it can be really difficult to have the confidence, as a female, to embrace the stage as an outlet for honest expression, protest, and ferocity,” she said.

“In this time of revolution for womyn and non-binary people, it is more important than ever to stop looking and sounding pretty on stage and to show the world what we really mean.”

Olenick said the camp could be an important tool to start shifting gender roles in music and start becoming more inclusive.

“As we normalize the image of girls, trans, and non-binary [individuals] in music, it becomes more absurd to relate someone’s gender to their talents. It will stop being a novelty and become the norm.”