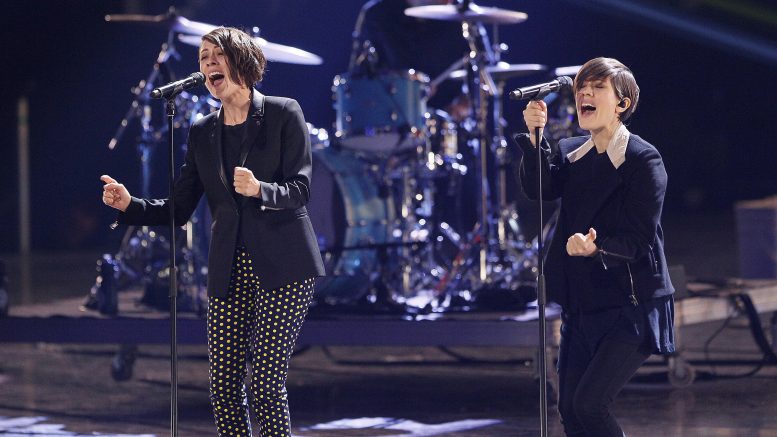 Tegan and Sara rehearse in Winnipeg before their performance at the 2014 Juno Awards. THE CANADIAN PRESS/John Woods

Twin indie-pop duo Tegan and Sara hit the Pantages Playhouse Theatre on Nov. 2 to play their album The Con from front to back.

The Con X: Tour helped celebrate the recent 10-year anniversary of their fifth studio album, originally released in 2007. Perched upon a lit platform, the duo stripped down to an entirely acoustic set with two additional band members, who came in and out of the performance, on guitar and keys.

The duo is undeniably talented. The simplicity of the songs exaggerated the raw talent oozing from their identical pores. Their voices effortlessly compliment and harmonize with one another as they sing alongside lyrics that are heartbreakingly naive, a fantastically nostalgic experience for anyone that has spent time with the album since its original release.

Collective goosebumps were felt during hits “The Con” and “Back in Your Head,” songs that helped the album reach #34 on the Billboard 200 and #4 on the Canadian Billboard chart.

The show was unique. To hear a full album in order is a rarity and it was very special for the duo to be playing in such a small venue. Their venue choice was a switch from their last visit to Winnipeg, when the duo played the former MTS Centre in 2013.

The intimate setting lent itself to the acoustic performance. The comfortable chairs, each like a soft bed, allowed you to feel as though you were sinking into the overwhelmingly sad tunes that the twins emphasized with their dialogue between songs, apologizing that they had nothing happy to sing.

The duo’s well-executed banter added much to the performance. Rambling stories that would normally make you check your watch were funny, entertaining, and meaningful. Stand-out moments included recollections of their most vivid memories of Winnipeg, memories which plucked them from stardom and humanized their careers as young performers trying to make it by traveling across the country. Another such moment was when two of the band members had to leave stage to go to the bathroom – haven’t you ever wondered what you would do in that situation?

Another point where they took a step away from the album was when they discussed the importance of the Tegan and Sara Foundation. This organization focuses on empowering LGBTQ girls and women by “fighting for economic justice, health, and respresentation.” Tegan and Sara came out as queer to their friends and family when they were 19 and 18, respectively.

The show was altogether fantastic and seeing performers and artists that have been in the game for such a long time, regardless of genre or familiarity with their music, is an amazing experience because of their long-lasting raw talent.