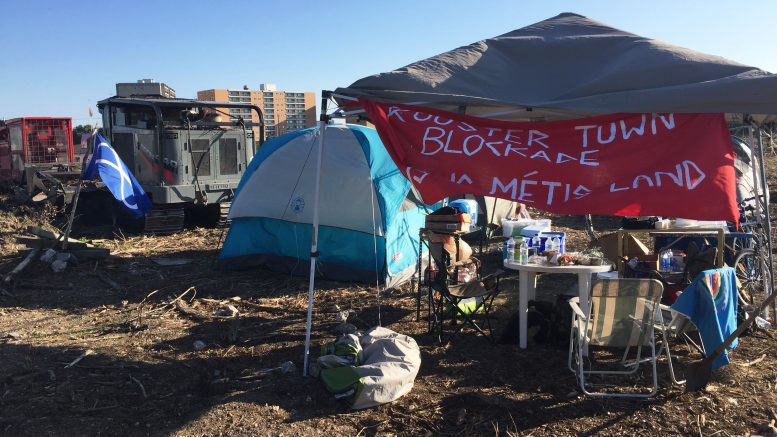 The Rooster Town blockade camped out on Parker Lands from mid-July until September.

By Imreet Kaur
Image by Courtesy of the Rooster Town Blockade October 26, 2017

Nearly 50 protesters are being sued in excess of $500,000 by a Winnipeg developer after the Parker Lands development site was blockaded for nearly two months this summer.

A lawyer for Gem Equites, a Winnipeg based developer owned by Andrew Marquess, asked the court to add an additional 44 names to a lawsuit initially launched in July, bringing the total number of defendants to 49. The suit is seeking to recover legal fees, security expenses, and costs associated with the delay of the project this summer, according to a CBC News report.

The protesters, who prefer being referred to as land protectors, include students, Indigenous rights activists, and local residents who organized under the name Rooster Town blockade this July.

The protesters remained on the Parker Lands, in the Fort Garry area, for nearly two months before a court injunction forced them off the site in September. The name Rooster Town blockade harkens back to a Métis settlement on the outskirts of Winnipeg which was home to an economically and socially marginalized population.

The blockade, with about 30 active members, aimed to stop the continued tree cutting on the site and to protect adjacent wetlands.

Mitchell Van Ineveld, a co-organizer of the blockade, said “Wetlands are disappearing at an alarming rate in Manitoba” and described the land as “A really beautiful urban green space that’s not a common thing to find in Winnipeg.”

Shortly after the blockade went up, Jenna Vandal, a Métis-Anishinaabe University of Manitoba student and blockade leader, told CBC Radio that protesters were hoping to protect the remaining two-thirds of the site’s forest after crews contracted by Gem Equities had already began removing trees. 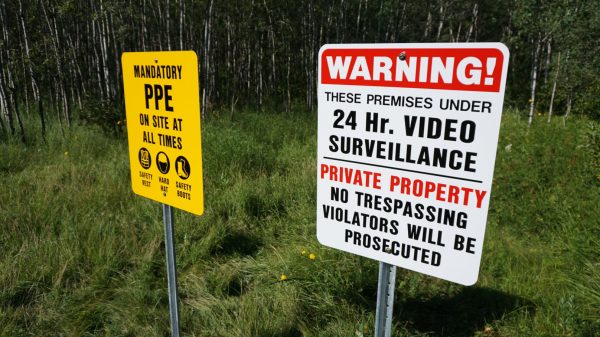 Gem Equities put up signs after Justice James Edmond issued an injunction
ordering the protestors to leave the property.

The cutting of the remaining forest resumed following the injunction being issued.

A portion of the Parker Lands was acquired by Gem Equities in a contentious land swap with the City of Winnipeg in 2009 in exchange for a piece of land adjacent to the Fort Rouge portion of the Southwest Transitway.

In an affidavit filed over the summer, Marquess stated that “If the property was truly ‘contested,’ that contest would have occurred many years ago when the City of Winnipeg was considering the site for redevelopment.”

The contested land, located to the south of Taylor Avenue and west of the Jubilee interchange is, according to Vandal, also a significant part of Métis history.

A Supreme Court ruling in 2013 recognized Ottawa’s failure to allot lands promised to the Métis in Section 32 of the Manitoba Act of 1870. A total of 1.4 million acres had been promised to the children of the Métis following the end of the Red River Rebellion in 1869.

Highlighting the importance of consultations from the representative groups, Ineveld said “We think it’s really pertinent in 2017 to be having conversations about who should be consulted and who should have a say over how the land is used.

“And also I think that this case goes to show just how terrible settlers are at land stewardship versus how the Métis cared for and lived on this land without destroying it.”

Ineveld added that “Now that a private settler developer has control over it, he has just ripped its beauty to shreds.”

Ineveld said the group is focusing on outreach efforts, calling it a “big priority” among social justice advocates who are passionate about “Indigenous land rights and sovereignty.”

The protesters are “trying to highlight the fact that, really, it’s Indigenous people who should be having a say over how land is used in Canada,” Ineveld said, “because they really have a better understanding of how we should be treating lands than we do as settlers.”

Members of the blockade are advocating that consultations from the Manitoba Métis Federation, Treaty Land Entitlement Committee of Manitoba, and various Indigenous groups be carried out before transfers are completed and development plans are created.

Madeline Jantz, one of the protestors and a University of Winnipeg sociology student, said she feels frustrated that a private company can sue working class people and students for losses of income.

“It’s really overwhelming since we’re all busy and broke from being in school,” Jantz said. “It’s hard to conceptualize paying tuition, I can’t even begin to conceptualize [$500,000] that Gem Equities is suing us for.”

The protestors have requested community support in the form of contributions to their legal defence fund through a Go Fund Me page. In a press release, the members of the dismantled blockade said they “believe this case has very important implications for ecological justice and Indigenous rights advocates across the country.”

“The struggle has relocated to the courtroom,” said Jantz, “but it is the same fight.”