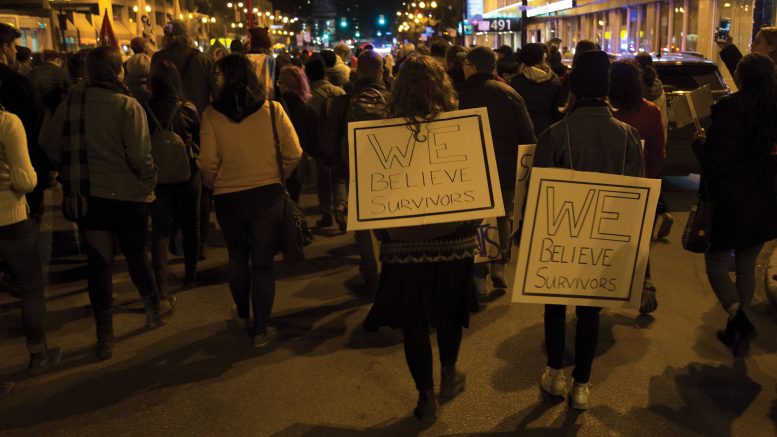 The crowd consisted of an array of representatives coming from different organizations around the city.

Hundreds of Winnipegers gathered at the University of Winnipeg to march in solidarity with sexual assault survivors at the annual Take Back the Night march held Oct. 19.

Take Back the Night is a community-based grassroots movement that hosts rallies throughout Canada with the objective to end sexual and institutional violence against women. These rallies have been held since the 1970s.

The organizers of the march chose “We Believe in Survivors” as the theme of the event to send a clear message to victims that their stories are believed. Placards held by marchers also conveyed this message.

The common themes addressed by guest speakers were how white supremacist, sexist, transphobic, and homophobic culture contributes to the systemic devaluation of survivors and their stories. With creative slogans and high spirits, the crowd chanted for change as they
made their way down Portage Avenue from The University Winnipeg.

Karen Sharma, director of investigations and policy at the Manitoba Human Rights Commission and one of the speakers, stated the importance of taking proactive measures in addressing sexual violence.

“It shouldn’t take this many of us, let’s be real,” Sharma said during her speech.

“One person saying that they’ve been affected by sexual and gender violence should be enough for us to reassess, for us to change things, but it hasn’t been.”

“Honestly we shouldn’t have to share our stories anymore,” she added.

“Tonight is about taking back the safety that is rightfully ours whether we speak out or not.”

Explaining the importance of collective efforts to address sexual violence, Sharma said “It’s time for men, and in particular cis[gender] men […] to start talking about how they are going to commit to changing our culture of misogyny and violence.”

“And it’s time for white people to start talking about how they are going to start checking their privilege.”

Megan Linton, vice president of external affairs of the University of Winnipeg Student’s Association, also addressed the audience. She reminded the marchers that disabled survivors – although more likely to experience sexual violence – are sometimes left out of important conversations. She outlined the importance of using an intersectional lens to understand survivors who feel excluded from the conversation.

“It’s something that we pretend not to know,” she said. “And so as we gather here tonight, we have to acknowledge that different communities and different intersections of people are so affected by sexual violence in ways that we forget about and don’t acknowledge, and that sexual violence isn’t just perpetuated by men, but also by our criminal justice system.”

UMSU signs on to “Our Turn”

The University of Manitoba Students’ Union (UMSU) has called on the U of M community to adopt and implement precautionary measures against campus sexual violence.

The move comes after UMSU – alongside student unions across Canada – signed onto “Our Turn,” an initiative which aims to end sexual violence at post-secondary institutions.

Our turn, the student group behind the movement, graded the sexual assault policies of each signing union’s university. The U of M scored 73 out of 100.

UMSU vice president advocacy Allison Kilgour said a 73 per cent score means the university ranked higher than many Canadian institutions – a score she said can be credited to the university’s revision of its sexual assault policies in 2016, before the province’s sexual assault legislation was passed into law.

The Progressive Conservative provincial government passed The Sexual Violence Awareness and Prevention Act into law in April, mandating post-secondary institutions to develop a process to respond to sexual assault disclosures and raise awareness about sexual violence.

Kilgour said that a perfect score should be the U of M’s target.

Kilgour commended the clear procedures, guidelines, and the framework of the U of M’s current sexual assault policies while pointing out some of the drawbacks in the process of filing a complaint and an urgent need to increase support services for survivors to ensure their protection.

“Seventy-three per cent is not and never will be good enough,” she said.

“One sexual assault is too many, and we should always be aiming for 100 per cent in our policies, procedures, and practices.”

Attributing the average score to policies and agreements beyond UMSU’s control, such as the Freedom of Information and Protection of Privacy Act and union agreements, Kilgour said UMSU had adopted short-term and long-term goals to improve safety on the campus.

“In the next few weeks, UMSU will be striking a committee to review university policies such as the Sexual Assault and [Respectful Work and Learning Environment] policies, which will give us clear direction from students to advocate for meaningful revision and changes,” Kilgour said.

Long-term goals include continued advocacy efforts to promote safety and a culture of consent and mandatory training for staff with student input.

John Danakas, the U of M’s executive director of public affairs, applauded UMSU for their efforts, and reassured students that the university administration remains committed to addressing sexual violence on campus.

Moving forward, Danakas said the university will work closely with the student union, as well as faculty and staff, to discuss campus sexual violence through workshops, dialogues, and relevant programming.

“The university is committed to fulfilling its responsibility to create a safe, supportive, and respectful environment for all members of the university community,” he said.

“The university is working hard to accomplish this by pursuing initiatives that prioritize the prevention of sexual assault and sexual violence through education, awareness, and building a culture of consent.”

Correction: An earlier version of this story said the university updated its sexual assault policies after the provincial Sexual Violence Awareness and Prevention Act was made into law. In fact, the U of M revised its policies in 2016, before the legislation was passed. The Manitoban regrets the error.