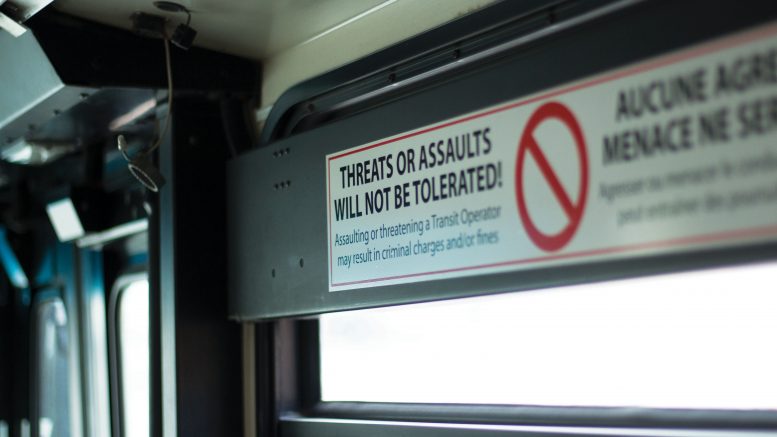 A pair of violent attacks on Winnipeg Transit buses last week has renewed discussions of bus safety in the city.

Both incidents resulted in arrests, and one in minor injuries.

Third-year University of Manitoba economics student Rhythm Shirole takes the bus daily and said she has never felt unsafe or encountered violence on the bus.

But she admitted she was more careful after a transit operator was killed in February following a confrontation with a passenger who refused to exit the bus in the early morning hours.

“After that, I was really cautious,” she said, “but I have never really felt unsafe.”

“There are Friday nights or Saturday nights when everybody is just drunk or high and you can just sense it, you know,” she said. “Like some people, they are so fricking drunk that you just feel that ‘Oh my god, I hope that person doesn’t misbehave.’”

Gabrielle Cochingco, a third-year management student who relied on public transit as her main mode of transportation until this year, also said she has not experienced violence on the bus.

“Most people on the bus were keeping to themselves,” she said.

“And that is how I went about doing it as well. Nothing ever happened besides the bus taking so long.”

She said she does not feel transit can do much more to make busses safer for passengers. “I don’t think there’s much else they can do,” she said. “Because you can’t really expect what will happen and they’ve already taken all the precautions they need if [something] does happen.”

He said the city has promised the union five new security personnel but that he would like to see a special transit police service.

“As a union, we want to take a further step to increase the security on buses so people can feel safe, and these kind of incidents are less and less, and hopefully never,” he said.

The first incident last week involved a passenger who boarded on the U of M campus at Chancellor Matheson Road and University Crescent – outside the Frank Kennedy Centre – just before noon on Oct. 18.

According to a police report, a man boarded through the rear door and became verbally abusive when the driver requested he pay the fare. Shortly after, a transit supervisor boarded the bus and attempted to speak with the man, who threatened and assaulted the supervisor, tearing his uniform. The driver and supervisor were able to restrain the man until police arrived.

A 24-year-old man is facing charges of assault, uttering threats, and mischief. Less than two hours later, police responded to another transit assault near the Tuxedo Avenue and Corydon Avenue. A 43-year-old man was arrested after allegedly approaching a 45-year-old man unprovoked and choking him until he lost consciousness. A second passenger who attempted to intervene was also attacked. Both were treated for minor injuries.

In February, a Winnipeg Transit operator died after he was stabbed repeatedly in the early-morning hours by a passenger who refused to exit a bus at its final stop of the night on Dafoe Road, directly across from Taché Hall. In the week that followed, operators rallied at Winnipeg city hall demanding a safer work environment.

Numbers provided by the Amalgamated Transit Union, which represents Winnipeg operators, show that assaults on drivers reached a five-year low in 2014 with 39 attacks. However, 62 assaults were reported in 2015 and 45 in 2016.

Shirole said it is incumbent on passengers to be aware while on the bus, and to keep their senses.

“You know that [you are] going to be travelling by public transport and [to] not get that drunk or high so that you’re not of your senses,” she said. “It depends on ourselves as well and how we go about it.”

More than the sum of its parts