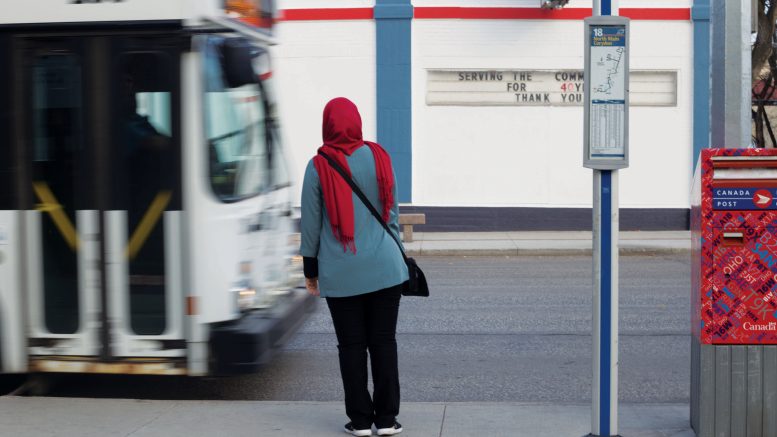 U of M professor shares her study on the successful economic integration of refugees.

Taking two buses from Corydon Avenue, Rasha Kossad leaves her home on Saturday mornings to head to the Polo Park Hearing Centre where she works as an administrative professional.

“At Polo Park, I work from Wednesday till Saturday,” she said. “And I have another job at a physiotherapy clinic, it’s Monday and Tuesday.”

According to Kossad, working two jobs is interesting – it keeps her busy, it is manageable, and she likes it that way.

Kossad arrived in Winnipeg with her family three years ago, following the Libyan Civil War.

“I was living a very normal life in Libya, happy with my family and everything going okay and well,” Kossad said. “I was studying until the razing happened and the war started and my brother was killed.”

Following the death of her brother, Kossad and her family registered with the UN Refugee Agency and were later relocated to Canada.

After a year in Winnipeg, Kossad started working at Tim Hortons, balancing her job with her studies at Robertson College’s medical assistant and administrative professional programs.

“Starting the life from the beginning, it was the most difficult thing that I had here,” Kossad said. “When you come you are already educated and you have your diploma. You come here, it’s hard to find a job with a good diploma because you need to get Canadian experience. That’s why I decided to start studying again.”

In St. Paul’s College’s Arthur V. Mauro Centre for Peace and Justice weekly brown bag lecture series, U of M sociology professor Lori Wilkinson spoke on long-term labour market trajectories of refugees coming to Canada and shared her own findings on the short-term trends of their economic integration.

“I want to preface this whole talk with my problem with this talk and that is: I totally abhor the discussion that we need to have about the economic integration of refugees,” she said. “I don’t have to tell you guys in the room that refugees come to Canada because of humanitarian crises of human creation. And so this idea that they somehow have to be economic benefits to society and the discourse that we continually have to talk about – it makes me shudder.” 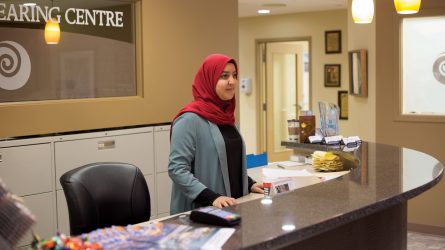 Rasha Kossad manages a busy workload, balancing two part-time jobs, including her work at the Polo Park Hearing Centre, and participating in many community activities.

Wilkinson shared two of her studies, one conducted in March on initial settlement experiences of Syrian refugees, and another in 2013 with refugees and immigrants. Both studies were specific to western Canada.

Highlighting long term benefits, Wilkinson noted that Canada’s GDP would grow at an average annual rate of 1.85 per cent between 2017 and 2040 due to the arrival of refugees to Canada, if kept at around 17,000 new arrivals per year.

Wilkinson added that refugees are more likely to perform what she called “4D jobs” – jobs which are dirty, difficult, dangerous, and dull.

Wilkinson said that although she is not particularly fond of this argument, “Research has shown […] that in doing these 4D jobs, yes, refugees actually push out Canadians who are doing these jobs – but they push them out and into actually better jobs. So they get higher wage, better jobs as a result.”

On what we know about the employment outcomes among refugees, Wilkinson said that refugees contribute to at least 60 per cent of labour market growth in Canada, many working multiple jobs.

Wilkinson added that refugees also pay more in taxes than they receive through social services over their lifetime.

“Are there problems? Absolutely,” Wilkinson said. “From the short-term it’s a struggle. But I encourage people to think about the long-term because refugees become Canadians and they stay here and they contribute to our economy.”

Daniel Mach was forced to flee his home in what is now the Republic of South Sudan when he was six years old. He was separated from his family and forced to join the Red Army – an army comprised of child soldiers. At the age of 13, Mach fled to neighbouring Kenya where he settled in the Kakuma refugee camp, currently home to more than 180,000 refugees and asylum-seekers.

Mach spent the next 10 years preparing to compete for a scholarship at World University Service of Canada’s (WUSC) Student Refugee Program (SRP). Established in 1978, SRP supports over 130 refugee students per year to study at campuses across Canada.

In 2008, Mach was sponsored by WUSC to study at the U of M, where he pursued a degree in mechanical engineering. He currently works for the City of Winnipeg’s water and waste department.

On challenges he faced when first arriving to Winnipeg, Mach said, “I wasn’t fully oriented on what I need[ed] to do or where I should go. Starting with things like food – as simple as food – navigating through small menus.”

“They have a good phrase here in our Canadian context that they say: ‘It could have been worse,’” Mach added. “All the challenges that I’ve seen here are not any worse than what I have passed through.” 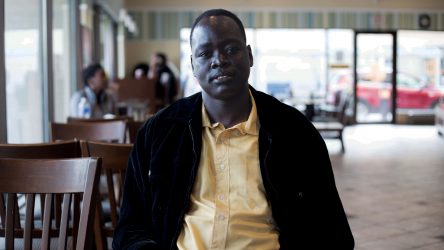 Daniel Mach, former U of M engineering student, shared his experiences and initial struggles coming to Canada as a student refugee through WUSC.

Both Kossad and Mach expressed their desire to give back to the community.

“As someone who [has] seen much of the world that is happening,” Mach said, “I want to be part of the good guys that are trying to encounter the bad guys.”

“I should start giving back,” Kossad said. “I was the first one of my family to start working very early, as soon as I came, and then my brother started working and now my parents. So we don’t feel that we are getting any money from the government.

We are working, we are paying the tax as all the Canadians here. So we feel like we are Canadian.”

“I pay taxes,” Mach said. “Perhaps I pay more taxes than most other Canadians.” Mach said that stereotyping a large group, such as refugees, is unfair.

“It’s not fair to say that the immigrant[s] are here just living on Canadian taxes,” he said. “If anything, they bring a lot of diversity to this country. They improve the economy of this country.”

“These are the people who only need security, that’s all they need,” Mach added. “Everything else, they can take care of it.”

Barack did not rock this debate

The man on the radio

Military recruiters should be welcomed, not scorned on campus