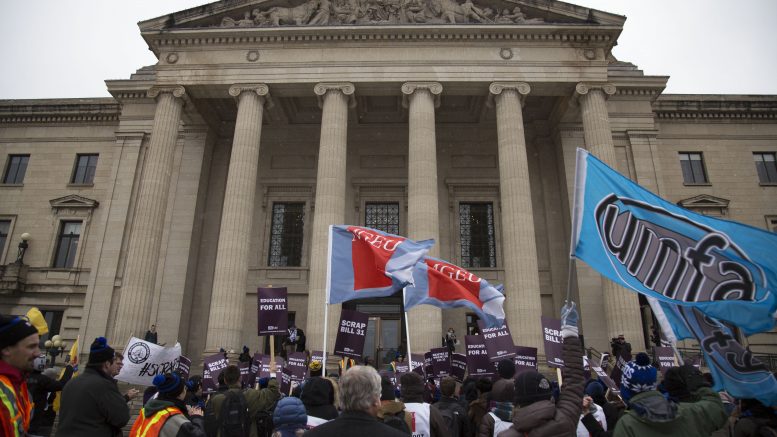 Hundreds of students and community members marched from the U of W to the Manitoba Legislature to protest Bill 31 Oct. 26.

More than one hundred students marched from the University of Winnipeg to the Manitoba legislature on Thursday, calling on the provincial government to scrap Bill 31.

Bill 31 was introduced by the Progressive Conservative government in March. If passed, the bill will allow universities in Manitoba to increase tuition fees by up to five per cent plus inflation annually, effective September 2018. The bill also removes restrictions on course-related fees.

Tuition fees are currently legislated to cap at the level of inflation, a law passed by the NDP in 2012. The NDP legislation followed a decade-long tuition freeze that was lifted in 2009, when Manitoba universities were allowed to increase fees by as much as five per cent before they were indexed to inflation.

“On our campuses, there are already students who are struggling to pay for tuition, for food, for rent,” said Laura Garinger, president of the University of Winnipeg Students’ Association, to the crowd gathered at the steps of the legislature.

“It’s hard not to feel hopeless, but we’re here today together, showing students will not be divided. We are stronger together and together we can stop this austerity government.” 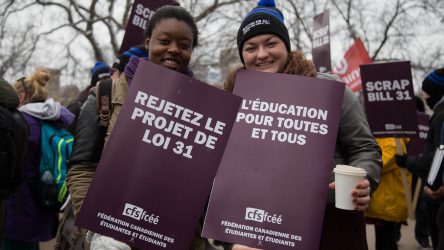 Organized by the Canadian Federation of Students – Manitoba, the protest was attended by students and alumni and members from CUPE, UMFA, MGEU and Manitoba Federation of Labour.

Among the speakers at the rally was University of Manitoba Students’ Union president Tanjit Nagra. She expressed her concern about the impact tuition fee increases will have on international students.

“I’m running out of options as a student leader,” she said. “I don’t know what to tell international students when they come to my office saying: ‘Tanjit, we need help, we can’t pay for our tuition.’”

The bill had its second reading on Oct. 25, which was followed by public hearings hosted by the Standing Committee on Human Resources this week. Bill 31 will go back to the legislature for a third reading in November.

Michael Barkman, U of W graduate and previous chairperson for CFS-MB, echoed concerns regarding students’ ability to pay tuition fees, saying the bill will only increase the “barriers” Manitobans face when accessing post-secondary education.

Barkman said the additional funding universities will receive through tuition increases will not help improve the quality of education in Manitoba’s post-secondary institutions.

“The only way we’ll get high quality institutions is if we get a strong investment from the provincial government,” he said.

The province froze its operating grants to universities in its 2017 budget, holding funding to 2016-17 levels. Under the former NDP government, the grants had been increasing by 2.5 per cent annually in recent years. The provincial grant allocations to the U of M this year total more than $363.1 million. Overall provincial spending on post-secondary rounds to $704.6 million.

On the campaign trail, Premier Brian Pallister promised to increase provincial funding for the Manitoba Scholarship and Bursary Initiative from $9 million to $20 million, with two-thirds of the total funds – $13 million – to come from the private sector.  The deadline to fulfill this promise was set for the end of the 2018 fiscal year.

According to information obtained by the NDP through a freedom-of-information request, Manitoba Education and Training has raised just over $1.8 million in private funding so far. 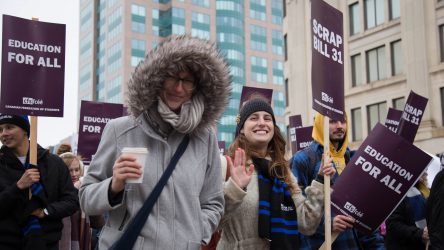 U of M student Hannah James (right) said Bill 31 would de-incentivize students to stay in Manitoba.

U of M student Hannah James expressed her worry in regards to the direction the province is taking in terms of educational support for post-secondary students.

“I feel that education is a right and that, considering we are the backbone of Manitoba’s economy, we need to be supported,” she said. “This bill is going to adversely affect the ability for students to participate and for students to actually attain a university degree.”

James added that by implementing Bill 31, the drive to pursue post-secondary education in Manitoba will decrease.

“I don’t think that there’s going to be as much of an incentive to stay in Manitoba,” she said.

Calling attempts to increase scholarship and bursary funding “inaccessible” and “a Band-Aid response,” James said “The government should stop thinking about short-term balanced budgets and start considering the long-term prosperity for all Manitobans.”

Joining the rally at the legislature, Manitoba NDP leader Wab Kinew said Bill 31 should be brought down.

“Raising tuition is the exact wrong move,” he said. “We could be making education more accessible and more affordable, and because tuition is one of the biggest barriers that a lot of students face, it should be going down, not up.”

Instead of increasing tuition fees, Kinew said the government should increase the amount of operating grant funding.

He said, “What’s happening here is just a move on the part of Pallister to try and take more money from students in the form of tuitions and fees.”

Kinew supported the students actively participating in the protest against Bill 31.

“I think it’s important for students to keep speaking out and to try and weigh in on the bill and do what they can to show the Pallister government that this is the wrong move,” he said.

Kinew said that if the NDP were successful in the 2019 provincial elections, the NDP would repeal the act if it were to pass.

“Beyond that, we’d look at dismantling all of the barriers that post-secondary students face.”