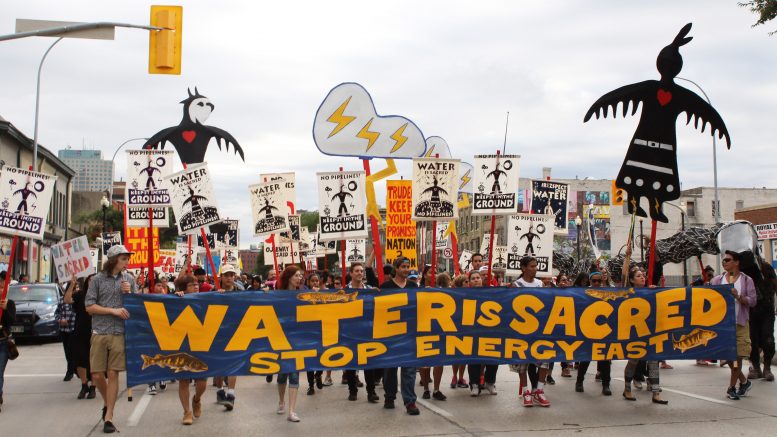 A march held on September 6, 2017 saw hundreds of Winnipeggers march down Main Street with a sacred totem pole from The Forks to the Circle of Life Thunderbird House while protesting Energy East.

On the morning of Thursday, Oct. 5, TransCanada Corporation made the announcement that the construction of the Energy East pipeline project would not go ahead. The 4,600 km pipeline would have carried roughly 1.1 million barrels of oil per day from Hardisty, Alta., to Saint John, N.B., making it the biggest proposed pipeline project, larger than both the Trans Mountain and Keystone XL pipelines.

Current projections of increased oil production are in stark contradiction to the federal government’s commitment to reducing Canada’s greenhouse gas emissions in accordance with the Paris Agreement. At what point will growth in the oil sector cease to be a driving economic force in this country? When will wide-scale acceptance of renew- able and alternative forms of energy become a reality? These questions have yet to be answered, so there needs to be a concerted and intentional effort on behalf of our federal and provincial governments to end our dependence on the oil industry and economic growth itself.

Currently, oil is worth less than half of the US $107 per barrel that it was back in 2013 when TransCanada announced the birth of the Energy East project. Economically speaking, it is not a great time to invest in the oil industry, let alone sink billions of dollars into a project that might not have long-term returns. The federal government of Canada has also been pushing this message of economic circumstances, saying there were purely financial and business reasons for the cancellation.

This isn’t the full story, however, since the National Energy Board (NEB) was the agency tasked with overseeing the approval process and it was ultimately for regulatory reasons that TransCanada decided to kibosh the entire controversy-riddled project.

Playing Clue: why the project was abandoned

Plans to build a port in Cacouna, Que., were stalled in 2014 with a court-ordered injunction initiated by environmental groups worried about beluga whale breeding grounds being affected by its construction. When the NEB was conducting hearings in Montreal in 2016, protestors shut them down. Then there was the Charest affair, which was ultimately the most likely cause of death for the entire project. Two of the three panel members responsible for the environmental review of TransCanada’s application were discovered to have met in secret with Jean Charest, a former Quebec premier who was then working as a consultant for the pipeline company. Once this was exposed, all three members stepped down, as did the NEB chair and vice-chair.

When a new panel was finally chosen, the NEB restarted the review that had been tainted with bias and decided it was no longer enough to only consider the direct emissions from the pipeline itself: they would now factor in both upstream and downstream emissions. Historically, the NEB would only consider direct emissions from a pipeline project: those relating to the actual transportation of the oil itself, such as the emissions generated by a pump. Upstream emissions include all those involved with the extraction and production process, while downstream emissions are considered the end-use emissions of consumers, such as what comes out of a car’s tailpipe.

Calgary mayor Naheed Nenshi recently said the NEB needs to be more consistent with how it approves energy projects. I agree: the NEB needs to, from now on, consistently advertise that both upstream and downstream environmental impacts will be factored into the decision-making process.

Let’s look at an example of why upstream emissions should be included in the environmental impact assessment.

The bitumen contained within the oil sands requires considerably more energy to be extracted and refined than oil from conventional sources. Using energy return on investment (EROI) as an indicator of overall efficiency, oil sands production has an EROI ratio of roughly 4:1, meaning it takes about one barrel of oil to extract, refine, and produce four barrels. This is pathetic, especially when compared to the EROI of conventional sources of oil, the value being at approximately 18:1. This is why the emissions involved with the extraction and refining process should be included within the environmental impact assessment, since it is directly contributing to the overall emissions associated with the specific project. Downstream emissions should be calculated as well, since an energy project such as a pipeline will inevitably lead to the release of massive amounts of carbon dioxide, the major culprit in global warming and climate change.

It seems the broadening of the regulatory agency’s considerations is the true reason for TransCanada relinquishing its proposal. It was unlikely to be approved given the environmental impacts of carbon emissions resulting from the extraction, production, and inevitable consumption of 1.1 million barrels of oil per day. This is the type of environmental impact assessment we need from our National Energy Board.

Once the entirety of environmental costs are included in project calculations, the costs almost always outweigh the benefits. By including all categories of emissions, new fossil fuel infrastructure projects will no longer be approved, effectively stopping the growth of this destructive industry. While many are going to be upset by the cancellation of energy projects, many more around the world will be even more upset when their local climates begin to change and their entire way of life is affected.

The connection between carbon emissions and climate change is a well-known scientific fact, but one that seems to be lost on politicians and economists, in particular. With a halt in the approval of fossil fuel projects, we will see renewable energy projects begin to take the lead in the energy sector, something that is required before we can see a significant decline in our national emissions.

Stick it to the economy

Proponents had touted the Energy East pipeline as a way to jumpstart local economies due to its predicted job creation, around 2,300 direct and indirect jobs in New Brunswick alone.

Even though the economic impacts would have been huge, the dependence of the Canadian economy on the price of oil would have increased and the day when we no longer rely on fossil fuels as a major driver of our society would have been delayed by decades.

When it comes to the economy versus the environment, the economy is still widely seen as being paramount. We cannot continue to push the costs of our current economic wealth onto the backs of future generations – this is not only morally wrong, but also extremely unsustainable. The time for ignoring and externalizing environmental costs is over: there needs to be action on climate change, and the TransCanada cancellation is outlining what this new trend will look like.

I refuse to believe that growth in the oil sands and action on climate change are not mutually exclusive. Much of the world’s fossil fuel reserves, as much as 80 per cent, must be left in the ground if we are to meet our emissions reduction commitments, a sentiment echoed by environmental, social, political, and Indigenous groups across the country. Protests regarding the oil industry happen regularly, and were instrumental in achieving delays in the approval process for Energy East.

“I think the work of many peoples has paid off,” said Ghislain Picard, Assembly of First Nations regional chief for Quebec and Labrador, in response to the announcement from TransCanada.

This opinion shows that without many people dedicated to shutting down these types of non- renewable energy projects, no politicians would lead the way.

As universities are places of higher learning for the next generation, such institutions need to host forums for leaders to participate in this conversation as well. Already one university in Canada, Concordia, has committed to partially divesting their endowment fund by moving $5 million of their fossil fuel investments into a more sustainable portfolio. The University of Manitoba should follow suit.

Pipelines are only part of the problem: it is the never-ending focus on economic growth that fuels our terrible track record on addressing climate change. Some say that we need pipelines in order to avoid more disasters like Lac Mégantic, the 2013 railroad disaster that saw 47 people killed by exploding tankers carrying crude oil, but I completely disagree. The problem isn’t the transportation – it’s the oil.