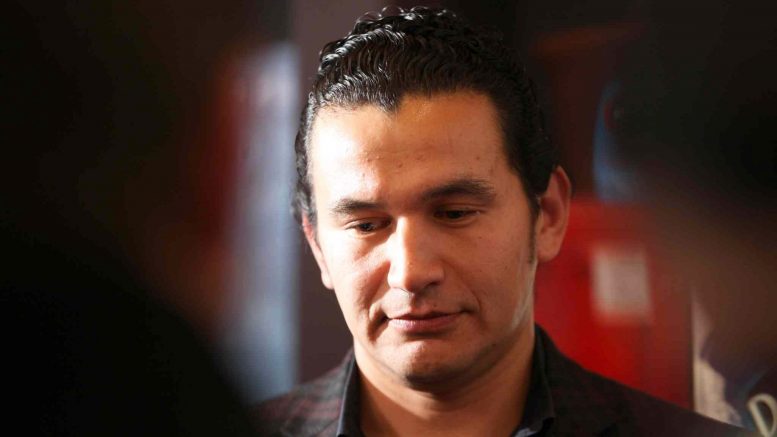 In the lead-up to the long-awaited Manitoba NDP leadership convention, a controversy emerged: leadership favourite and rookie MLA for Fort Rouge Wab Kinew had been accused in 2003 of assaulting his then-partner Tara Hart and her story was brought back to the surface – just in time to hurt Kinew’s chances at the leadership.

Kinew was charged with two counts of assault in June 2003. After several court appearances by his attorney, the charges were stayed in the summer of 2004. Hart told media that the two had been living together for about a year before the incident prompted her to move out. Kinew has repeatedly denied the accusations.

This opportunism on the part of Kinew’s opponents, as evidenced by the timing of the allegations resurfacing brought about a flurry of damaging reactions within and outside the party, at once re-traumatizing Hart and completely discrediting most Manitoban political constituencies that claim to believe survivors of domestic abuse. While a call to action for so-called feminists across the province to convert their words to action is needed, it is worth first naming how exactly specific parties went wrong.

A group particularly in need of calling out is the significant cohort of NDP supporters who were quick to close ranks around their new leader in light of the accusations. Employing the hashtag #ImWithWab, these individuals cynically manipulated the solidarity that built up around a candidate who has faced – and still faces – a slew attacks on his character from politicians and journalists, and marshalled that support the when he was faced with accusations from the family of an Indigenous woman.

Conflating these two situations ignores a fundamental shift in power dynamics between groups. Kinew has generally been in a position of marginalization due to, among other things, opponents exploiting the electorate’s racial prejudice to hamper his political success.

But in the framework of a court system that rarely succeeds in bringing those accused of abuse to justice, an abuser holds power over their victim. Survivors of abuse typically only turn to the criminal justice system when all other resources have failed to put a stop to an abusive or violent dynamic. They make themselves vulnerable by turning to a system that questions and denies their experiences. Whether deliberately or not, Kinew and his team are taking advantage of this dynamic, casting doubt on Hart’s allegations in hopes that the media – and voters – will eventually stop paying attention.

Political and cultural leaders such as Kinew and his fellow MLAs tend to set the parameters of acceptable discourse among their base just outside the reach of positions that may “hurt the cause.” In this case, they have failed to do so responsibly, and have allowed profoundly regressive rhetoric to further sully their already-problematic rebuttals of Hart’s accusations.

Those readily accepting the Kinew team’s narrative that we do not need to worry about these allegations – either through claims it did not happen or because Kinew says he has changed – please do better. Those of us on the political left need to be the ones who set the example of standing with survivors – even when the rest of society fails to, as is so often the case. If we do not unwaveringly stand behind Hart and those like her, no matter the political cost, who will?

To make a case

Kinew and company’s rhetoric has focused on a few key points: that the accusations aren’t true, that the charges having been stayed by the Crown exonerates him, and that Kinew is a changed man. There is little that needs to be said about the harmful nature of denying such allegations. Specifics of Kinew’s case aside, accusing someone who comes forward with accusations of domestic abuse or sexual assault of lying is a fundamentally harmful act.

While Kinew and his entourage are legally entitled to deny allegations of abuse, doing so as a first line of defence sends a clear message that some victims who come forward are not to be believed. In so doing, they have permanently damaged their credibility among survivors and those who stand with them. They have also made it much harder for the NDP to be an organization people can trust at a time when the party sorely needs the trust of the community.

The second point is as misleading as it is problematic. That the charges were stayed does not mean Kinew was acquitted, let alone found not guilty. Charges are often stayed in domestic assault cases due to the appearance of inconsistencies in the plaintiff’s testimony. This is emblematic of the way the deck is stacked against survivors – the justice system creates an “ideal victim” who reacts to being assaulted exactly how the court expects them to, who is able to re-traumatize themselves by testifying over and over again without ever missing a detail. This kind of logic is why someone like former CBC superstar Jian Ghomeshi – charged with multiple counts of sexual assault – can walk free, and it is why many survivors go without justice.

That Kinew is seeking public absolution based in part on the decision of a justice system that overwhelmingly betrays, silences, and re-traumatizes victims is both regressive and morally reprehensible. This also shows how, despite some rightfully celebrated progress, Kinew and the NDP still have far to go in their understanding of issues of gender-based violence. The treatment of the repeated testimony of an accuser as something that can be dismissed as untrue is a reproduction of the violence carried out every day on survivors by a patriarchal system that actively refuses to believe their stories.

The final line of defence is the idea that Kinew is a changed man who has put his past behind him, and that this personal growth should absolve him from guilt for the past wrongs he is accused of. The premise holds a kernel of truth – Kinew has certainly grown, and that growth should be applauded. But you cannot hope to heal and move on from the pain you caused someone while denying you ever caused it. Until he demonstrates an understanding of this fundamental point, as he has on past personal controversies, the change he has undergone is just not good enough.

It is worth noting that many voices driving this conversation are incredibly compromised, and their appearance of genuine concern for Hart should be met with a deep skepticism. Free Press columnist Gordon Sinclair Jr’s apparent personal dedication to dragging Kinew’s name through the mud borders on the obsessive. Similarly, both failed NDP leadership contender Steve Ashton and the Progressive Conservatives have been actively seeking out every recorded misdeed of Kinew’s in order to defame – behaviour that ought to be condemned by anyone with a conscience.

All of these parties are exploiting the criminalization of young Indigenous men to portray Kinew as unfit for office. They are employing the full force of colonialism to further marginalize an Indigenous political leader, behaviour that puts their political practice firmly in line with white supremacy.

However, as despicable as the above behaviour is, none of it should have a bearing on whether we believe Hart’s story. She did not ask for these white men to speak for her, and now her credibility suffers at their hands.

This is heartbreaking situation. Kinew’s election is an important and historic moment in Manitoba politics, and it would be a tragedy for the first elected Indigenous party leader’s career to be torpedoed so quickly. Kinew would be best to take a leave of absence as leader until this matter can be investigated and a path to justice can be clearly laid out – anything else would be political suicide, and utterly immoral.

Let this case also serve as a reminder to all those within movements that claim to be feminist that we may have abusers within our ranks. Whether they are a mentor, a comrade, a political leader, or a friend, we must maintain a relentless commitment to hold them accountable.

In particular, men on the left must reject examples such as the one federal NDP leader Jagmeet Singh set with his continued support for Kinew, and do as much as they can to keep their peers in check, as too often that work falls entirely on the shoulders of women and trans people.

We cannot expect people to put their trust in our movement – in the world we seek to build – if we are not consistent in applying principles of emancipatory politics. We must always listen first not to those with power but those without it. We must struggle in service of victims – victims of patriarchy, of abuse, of exploitation – above all else.

To sacrifice the most vulnerable victims for the sake of preserving our movements’ political gains betrays these movements’ very spirit.