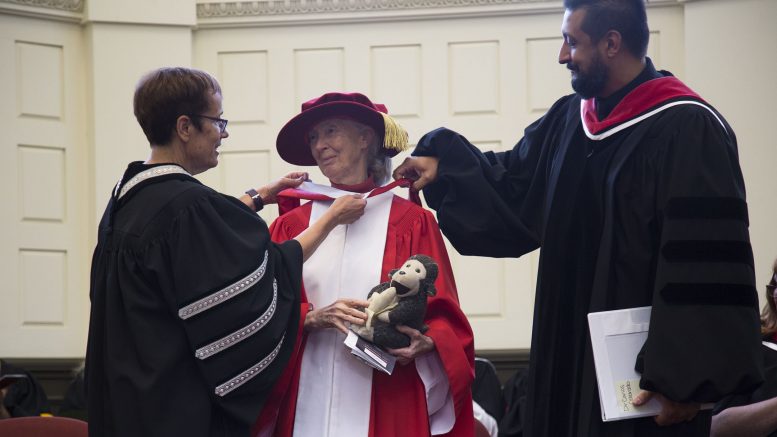 Jane Goodall receives honorary degree is doctorate laws at the U of W special convocation ceremony.

Primatologist Jane Goodall received an honorary doctor of laws degree from the University of Winnipeg Friday in a special convocation ceremony.

Goodall joins a distinguished list of individuals who have received honorary degrees from the U of W that includes former Ukrainian president Victor Yushchenko, retired general and senator Roméo Dallaire, and former president of Peru Alejandro Toledo.

“We use these ceremonies to honour extraordinary individuals, those who have made outstanding contributions to their field of study, profession, or to society at large,” Annette Timbee, the U of W president and vice-chancellor, said as she addressed the audience.

Friday’s special convocation ceremony was one of several events Goodall took part in during her visit to Winnipeg last week, which included meeting with a group of Winnipeg elementary school students, a celebration at the Canadian Museum for Human Rights commemorating the 40th anniversary of the Jane Goodall Institute, and a talk held at the Burton Cummings Theatre for the Performing Arts.

Goodall spoke about the Jane Goodall Institute and its origins, explaining that during her trip to Gombe, Tanzania, in 1960 to study chimpanzees, she “also learned about the crippling poverty, the hunger, the lack of education and health facilities for the people living in and around chimpanzee habitat.”

“I realized that if we don’t help these people to have better lives,” she said, “there’s no way we can conserve the chimpanzees.”

Founded in 1977, the Jane Goodall Institute is a global wildlife and environmental conservation organization with offices located in over 25 countries, including Canada.

Goodall said the institute began “not as a bunch of arrogant white people going into a poor African village and saying, ‘Well, you’ve made a mess of things, we’re going to do this to make your lives better.’”

Goodall explained that the institution rather began as a carefully selected team of Tanzanian researchers who went into villages and listened to the people, asking questions such as,“‘What do you think we can do to make your lives better?’”

Goodall also spoke about Jane Goodall’s Roots & Shoots, a youth service program that aims to foster respect and compassion for all living things, promote understanding of all cultures and beliefs, and to inspire individuals to take action.

“I think, probably, starting Roots & Shoots may be the best thing that I’ve ever done,” she said.
“One of its aspects, which I think is truly important these days, is it’s helping young people to break down the barriers that we build between people of different nations, different cultures, different religions.”

Speaking on her travels, Goodall said, “As I was travelling around the rest of the world I was learning more and more about what we humans are doing to the planet.”

“We can look at chimpanzee behaviour and see the many, many ways in which their behaviour resembles ours,” she said. “But the biggest difference, I believe, between them – our closest living relatives biologically – […] is this explosive development of our intellect.

“So is it not bizarre that the most intellectual species to ever walk this earth is destroying its only home?” Goodall concluded her speech by reminding her audience that every individual has an invincible spirit within themselves.

“Some people don’t realize that they have an indomitable spirit, we need to encourage them to allow it to grow, to achieve their full human potential,” she said.

This happens “when head works in harmony with heart and we have no barriers between people around the world and between us and mother nature.”