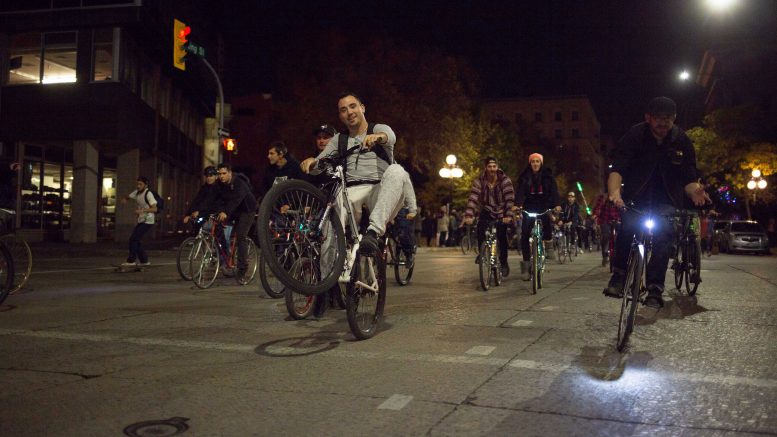 The Rainbow Trout Music Festival bike jam rolls down King St. into the Exchange District close to midnight for Nuit Blanche, on September 30, 2017.

There are so many opportunities to experience the thriving and expanding arts scene in Winnipeg. After all the hard work and time it takes to organize local art events of all sorts, getting people to show up is the next big challenge. When it comes to Nuit Blanche, this year was a success in terms of attendance. The streets were packed with people; the Exchange District and surrounding areas saw a tremendous turn out. Taking a closer look, what was the cost of that success?

In the past few years I have noticed an increase in attendance to free events in Winnipeg, and these new attendees vary in level of knowledge concerning how to be respectful towards both art and artists. One of the most obvious and ever-occurring problems is talking during performances. During a very intimate acoustic show I recently attended, the whole back half of the venue was filled with people talking loudly, ruining the show for everyone else who was straining to catch the words of the soft-spoken musician they had paid money to see.

The loud half of the audience were talking about their tough week at work, if they should buy another round of shots, and complimenting each other’s outfits, rather than the performer. It brings up a question relevant to more and more participants in Winnipeg’s growing arts scene:

If people pay for a ticket to come see an event and to consume art, they need to be respectful of the collective experience of others in attendance. The arts scene has become a different kind of hip and trendy by catering to wider audiences and with the increase of information shared over social media. The event information is more accessible to wider populations, so now everyone can participate with ease. Information is much more widespread: with cross-platform social media advertising, it is not difficult to find out what is happening in Winnipeg – and with music being so widely available, it is easy to find bands and music you may not have ever heard of otherwise had it not been shuffled in to your playlist.

I am big into promoting people attending events in the city as much as possible, but I have seen the effects of wide-spread coverage of events. And it occurred to me that perhaps I am promoting it to the very people that are causing the conflict between how I think art is to be appreciated.

People that say they hate Winnipeg just aren’t doing it right. There are more than enough events in Winnipeg to fill every day of the week. Frankly, the arts scene is booming in the city, and the breeding ground for this creativity lies in the heart of downtown – which is why Nuit Blanche happens primarily there.

Incredibly, this year’s event saw approximately 20,000 attendees. But it’s not all roses: Nuit Blanche has planned to beef up security for next year, and there was an incident this year where someone was pepper sprayed at Old Market Square. There were complaints of people spilling on to streets that were not closed off for pedestrians.

What’s more widespread is the problem of behavior. In order to keep the event a hit, Nuit Blanche should also be investing funds in education for next year’s festival because there are things beyond security concerns that need to be remedied.

The amount of disrespectful behaviour I witnessed at Nuit Blanche this year was at once disappointing and thought-provoking. There were several damaged works of art at the Winnipeg Art Gallery, one of which has been since replaced.

It was quite emotional to see these works of art ruined and I felt sad for the artist whose expression and work had been violated by people that didn’t understand how to use the gallery respectfully.  There were people running through the gallery, and a piece with phallic vandalism and the tag #nuitblanche written on it. It was extremely upsetting and again it demanded the question be asked: “Why are you here?”

Institutions and events that have such a broad reach have a responsibility to share with the community how to respectfully navigate art and performance. 4,360 people like Nuit Blanche Winnipeg on Facebook and around 7,500 people were listed as either attending or interested in the 2017 event.

The Winnipeg Art Gallery (WAG) is liked by 9,695 people on Facebook. The sum total of information that Nuit Blanche has on their website regarding respectful behaviour is only two sentences: “Please respect the art, the venues, the public spaces, and each other. We want to keep Nuit Blanche Winnipeg fun, safe and respectful for everyone.”

The WAG has some limited guidelines, but nothing approaching the how-to guide to art appreciation that Winnipeg needs right now. It seems like they address some common problems, but Nuit Blanche brings in broad audiences that may not be exposed to art any other day of the year.

I recommend that Nuit Blanche, The Winnipeg Art Gallery, or another Winnipeg art institution or organization with a lot of sway takes the time to write out – or perhaps put out in in a more accessible manner, such as a video – the expectations an art consumer is held to. There needs to be an easily accessible mechanism in place so that successfully getting an audience does not bring with it problems related to disrespectful behavior, as happens when newcomers enter art spaces and violate unspoken codes of conduct.

As a community, we need to ensure that rules and norms are universally followed. That includes, but is not limited to, setting up boundaries on when it is appropriate to laugh or talk during shows, as well as when one should or should not take pictures and selfies during shows, touch art, and perhaps consume drugs and alcohol near art. The consequences can be determined by the institution which can range from a warning system from someone at the institution notifying the disrespectful attendee that their behavior is not respecting the artist or the attendees, to expulsion from the event.

It is difficult to be the audience member in attendance to ask someone to abide by unwritten rules of a show or space, which is why it should be the responsibility of the institution.

While there should not be restricting limitations – because part of Nuit Blanche is seeing how people from different demographics interact with art – posters or sandwich boards that have rules and guidelines that are broad but still encompass the basics of respectful behaviour are important in passing along appropriate ways of interacting with art. Hopefully, that will percolate down to some of the smaller events that are gaining in popularity with people that are not constant consumers of live art.

Winnipeg and the existing arts community can benefit from some larger and previously mentioned institutions taking responsibility for introducing new people to the arts scene by sharing what is and isn’t accessible over the platforms that they use to advertise the events. An emphasis on reaching out for large turnout has had the effect of pushing out the people that are trying to consume art respectfully.

We can have the best of both worlds, so long as we start holding people accountable for their behavior in art spaces.