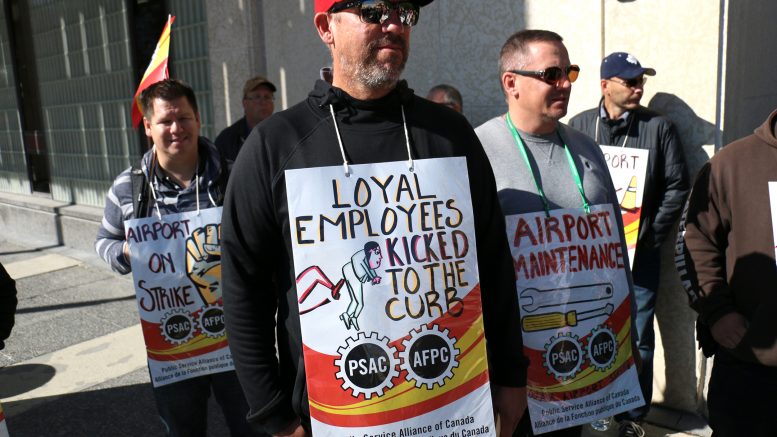 UCTE Local 50600 holds a rally at City Hall in solidarity with workers on strike at the airport.

More than 100 Workers of the Winnipeg James Armstrong Richardson International Airport have been on strike since July 24, after collective bargaining and mediation sessions with the Winnipeg Airports Authority were unsuccessful.

The strike includes over 120 workers from the Union of Canadian Transportation Employees local 50600, an affiliate of the Public Service Alliance of Canada (PSAC). The members have been without a contract since June 30 and began picketing July 24. The striking workers include administrative personnel, IT workers, and maintenance staff.

The two sides reached a provisional agreement late Sunday. A ratification vote is scheduled for today.

Marianne Hladun, PSAC prairies regional executive vice-president, said Sunday morning the main reason for the strike is the contracting out of union work, saying workers are seeking an agreement that includes job security and fair compensation.

“We have said that if there is any work to be done, our members should be doing the work rather than contractors and when there was no agreement reached, they hit the picket line,” Hladun said.

“We are currently exchanging proposals through the federal mediator,” she said. “The strike will continue as long as it needs to.”

“We have said from the very beginning,” she added, “that we are open to coming back to the table and having a discussion but that we meet some solutions on contracting out.”

Hladun said many members have been working at the airport since the 1990s and deserve to have protections against having their jobs contracted out.

When the strike began, Winnipeg Airport Authority denied contracting out union work and argued that the final offer before the walk-out included language regarding job security.

“When you look at what’s happening in Manitoba right now, with some unions looking at zero per cent [wage increases] and some companies are in layoffs, we thought providing job security for our employees and more wages was something that was going to be positive for them,” MacAfee told CBC.

Labour relations in the province

The Public Services Sustainability Act (PSSA) – also known as Bill 28 – was introduced by the provincial government in March. Its stated purpose is to provide a framework for public sector employees to negotiate new contracts and compensation increases while ensuring long term viability of public services in Manitoba as existing contracts expire.

The bill has not yet been passed into law.

Bill 28 will impose a two-year wage freeze on new collective agreements, followed by a 0.75 per cent and one per cent increase, respectively, over a four-year period.

Kevin Rebeck, President of the Manitoba Federation of Labour, views the PSSA as “unfair and unconstitutional,” and said it undermines the collective bargaining rights of over 120,000 public sector workers.

“It freezes wages for the entire public sector for two years, making the decision at the cabinet table instead of at the bargaining table,” Rebeck said.

About 25 labour organizations from across the province have come together to form the Partnership to Defend Public Services and is challenging the constitutionality of the PSSA. PSAC is one of the unions involved in the partnership.

Hladun said “there has been a shift in the labour relations in the province.”

While noting that the ongoing strike at the airport falls under federal jurisdiction, she said “I absolutely do believe that, because of the political climate provincially, that has an impact on the negotiations at the airport.”

Hladun said PSAC joined the partnership to defend public services because a number of its members do fall under provincial jurisdiction, including members at the University of Winnipeg and Brandon University.

Hladun noted that many low-paid academic units represented by PSAC are subject to the wage freeze in Bill-28.

“These are some of the lowest paid workers – research assistants, teaching assistants, markers, lab demonstrators – [and] they’re in precarious work,” she said. “We’re trying to negotiate appropriate working conditions and wages and the government has no place at that bargaining table.”

The University of Manitoba Faculty Association (UMFA) is one of the units affected by Bill-28. Representing 1200 members, UMFA was on strike for 21 days in the fall of 2016 when bargaining with the university broke off after the province mandated the U of M extend an existing contract an additional year without a salary increase.

The two sides eventually agreed on a short-term, one year deal to end the strike. UMFA has since ratified a long term agreement – under duress – and accepted monetary compensations consistent with the PSSA. UMFA has also joined the partnership to defend public services.

“It’s beneficial for us,” said Janet Morrill, UMFA president. “The government is relying on the fact that individual unions may lack the visibility and resources to be able to fight back against them. But if all the unions band together, they have the resources to effectively defend their rights.”

UMFA brought the university before the Manitoba Labour Board in the spring, claiming the U of M bargained in bad faith prior to the 2016 strike. A decision has not yet been released.

Support for the striking workers

Hladun expressed gratitude for the support airport workers have received from other unions through do nations and solidarity actions as the strike continues.

Many unions, Hladun said, are standing in support for these workers by travelling outside of Winnipeg to catch flights.

“I honestly believe,” she said, “that as we fight – whether it’s the [Brian] Pallister government or the federal government or private employers – labour in this province has been coming together for the benefit of all workers and I am so proud to be a part of it – to support them just like they’ve shown their support for us.”

Sophie Grégoire-Trudeau missed the point of International Women’s Day, but so did the people attacking her