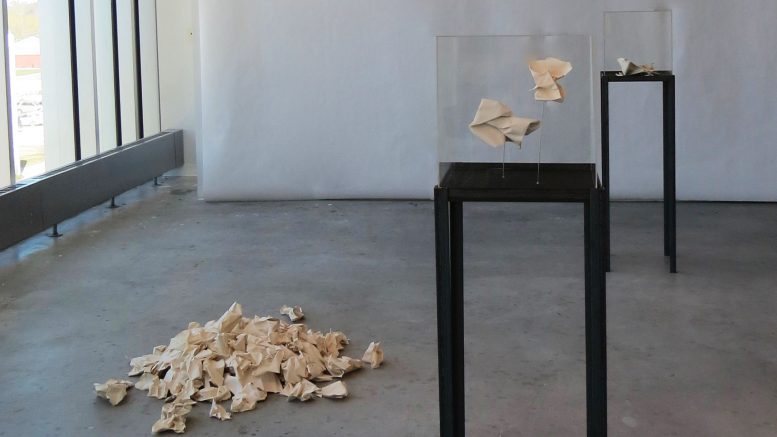 University of Manitoba school of art alumna Chelsey Thiessen was selected as the regional winner for a national art competition.

The BMO 1st Art! competition is open to visual artists from art schools across the country. Over 100 post-secondary art schools are invited to pick three promising students to participate and are judged by a board of directors and curators. With 303 entries, the competition had the most entries since its inception in 2003.

Thiessen said she is grateful that she was given the opportunity to participate in the competition and her unexpected win means a lot moving forward in her future artistic career as a recent graduate of the school of art.

“Winning this competition was something that I never expected, and is very exciting and overwhelming,” said Thiessen. “To have other people connect to the work that you are making is every artists’s goal and to have that affirmed as a recently graduated student is amazing.”

Thiessen’s piece visually demonstrates failure through a familiar representation of failed attempts. A pile of ceramic pieces representing crumpled paper shows that failure can have value, if re-examined.

“The creation of this piece stemmed from feelings of disappointment with my work in the previous term,” she said.

“I was struggling to find something that I enjoyed the process of making, but that also held significance for me conceptually and intellectually.”

“The meaning in this work comes through the transformation of material, from something that is normally thrown away into something that is considered valuable. The repetitive process became sort of therapeutic as I took old sketches and notes, carefully making replicas and then crumpling them,” she added.

The University of Manitoba school of art shaped Thiessen’s creative process and artistic identity and prepared her for her future artistic practice.

“I learned to improve my use of techniques and materials, but I find what has changed most in my artistic practice throughout my years at the school of art was striking a balance between the formal and conceptual aspects of my work, and the relationship that they have to each other,” said Thiessen.

Thiessen said she was apprehensive about taking a risk with the competition, but is grateful for the experience and especially with the results.

Moving forward in her artistic career, she said she will be more inclined to put herself out there and take risks.

“I think learning to take chances and to not be afraid to put yourself and your work out there is something that is important for an artist,” she said.

“This competition was a good learning experience for what that process may look like in the future. This has shown me the importance of taking chances, despite the probability of rejection, because there could be times when things work out and the risk will have been worth it.”

Thiessen’s work will be displayed at the University of Toronto from Nov. 16 – Dec. 16 alongside the 11 other regional winners and the national winner of the competition.

Administration cuts back on discretionary spending