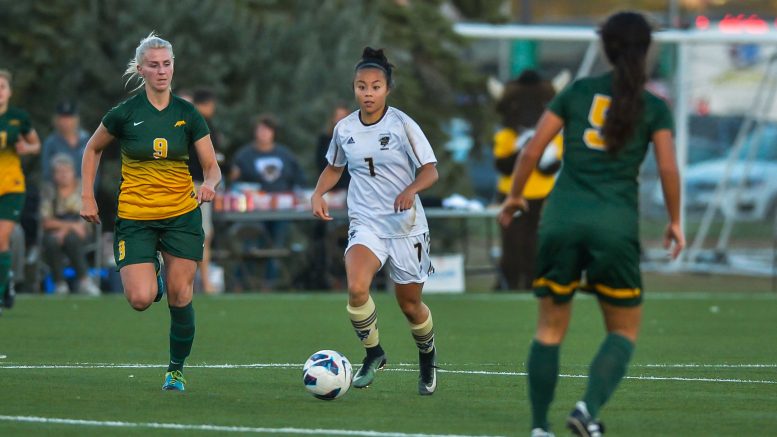 Manchester United has the tradition of superstar players wearing the number seven, with players like Cristiano Ronaldo and David Beckham donning the famous number.

The Bison soccer team has their own superstar wearing the number seven in Hailey Lavarias.

Recently named the U SPORTS female athlete of the week, the second-year midfielder is having herself quite the season with Manitoba. On Oct. 7, in a game against crosstown rivals the Winnipeg Wesmen, Lavarias exploded for four goals in a 4-0 win.

Her fourth goal showcased the supreme talent of Lavarias, who dashed in taking on Wesmen defenders and slotted the ball home in the bottom corner.

“It’s not everyday you score four goals, I was pretty excited about that,” Lavarias said.

It was the first time a Bison had ever scored four goals in a single game, an achievement Lavarias has worked hard for. So far this season, Lavarias has five goals and two assists in 11 matches. In her first year, Lavarias redshirted for the majority of the season, and it wasn’t until the final few games when she broke into the squad.

“I started rostering and got my starting spot right at the end of the season,” she said. “In the off-season I obviously had to work hard to keep my spot.”

Lavarias picked up the game when she was very young, after her parents got her into the sport to keep active.

“I started when I was five years old,” she said. “My parents kind of just threw me in there to keep active and try it out and ever since then I’ve stayed with it and been really successful with it and I’ve enjoyed playing it.”

The big topic on everybody’s mind is the U SPORTS national championships Manitoba will be hosting this November. Lavarias already has experience at the national level, going to club nationals in Newfoundland with FC Northwest in 2014.  There, Lavarias and her team earned a silver medal.

“I guess I’ve kind of been there but it’ll be different,” she said. “It’s higher stakes and the top university teams in the country.”

Like the rest of the Bison soccer team, Lavarias said she is excited for nationals, and will not be phased by the frigid November temperatures.

“As Winnipeggers, we’re pretty used to the cold, compared to the other teams around the country so it should be good for us,” she said.

“Our last game of the season last year we were playing Saskatchewan and it was snowing and hailing – it was really bad, probably the worst game I’ve ever played weather wise. We have experience playing in that kind of weather.”