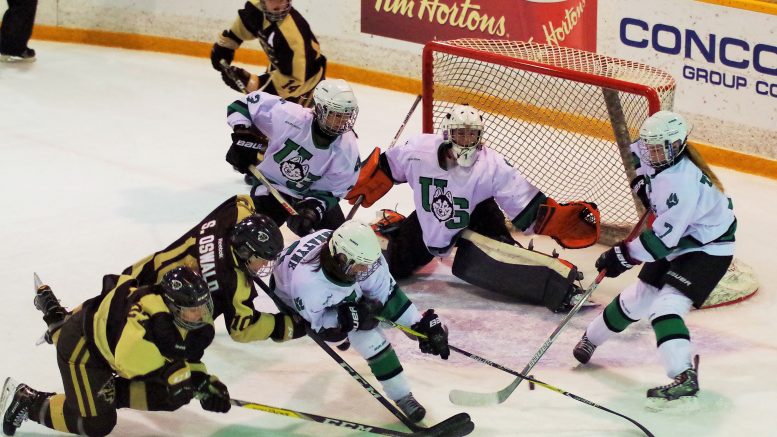 Bison forward Sheridan Oswald battles in front of the net against the Saskatchewan Huskies.

The University of Manitoba women’s soccer and women’s hockey teams were on the road in Saskatchewan this weekend.

The women’s hockey team played a two-game series against the University of Saskatchewan Huskies, earning a split. The Bison soccer team also earned a split, beating the University of Regina Cougars after falling to the Huskies.

Women’s soccer wraps up regular season with a split

The Bison soccer team finished their season with a split on the road against the Saskatchewan Huskies and the Regina Cougars. Manitoba lost a high scoring game on Saturday to the Huskies, but rebounded for a win on Sunday against the Cougars.

On Sunday against the Cougars, the Bisons snapped their three-game losing streak with a 1-0 win. Wagner scored her seventh of the season just before the end of the first half. Justina Jarmoszko earned the clean sheet making seven saves.

The Bisons will be back in Saskatoon next weekend to play the Huskies in the first round of the playoffs. No matter how the herd fares in the Canada West playoffs, they will be hosting the U SPORTS National Championships on Nov. 9-12.

The women’s hockey team closed their tough opening three weeks of the season this weekend. The herd battled hard against the Huskies to split another weekend pair.

Lauren Taraschuk made her second start for the Bisons on Friday, making 20 saves in a tight 1-0 loss. Huskies defender Leah Bohlken scored the lone goal in the second, rifling a shot through a crowd and past Taraschuk. The Bisons battled back with a flurry of chances in the final minutes of the game, but Huskies goaltender Chloe Marshall stood tall for the shutout win.

The Saturday matchup was more back and forth, with the Bisons taking the game 3-2. Jordyn Zacharias opened the scoring for Manitoba, potting her first of the year. Alanna Sharman extended the Bisons lead to two early in the second, picking up her first goal of the season as well.

Huskies captain Kaitlin Willoughby scored two unanswered goals to tie things up, but Erica Rieder played hero on the powerplay. Rieder notched her team-leading third goal, early in the third, slipping a shot by Marshall. Rachel Dyck made 25 saves in the win, her second of the season.

The Bisons will remain on the road on Oct. 27-28 to play a series in Calgary, against the Mount Royal University Cougars.