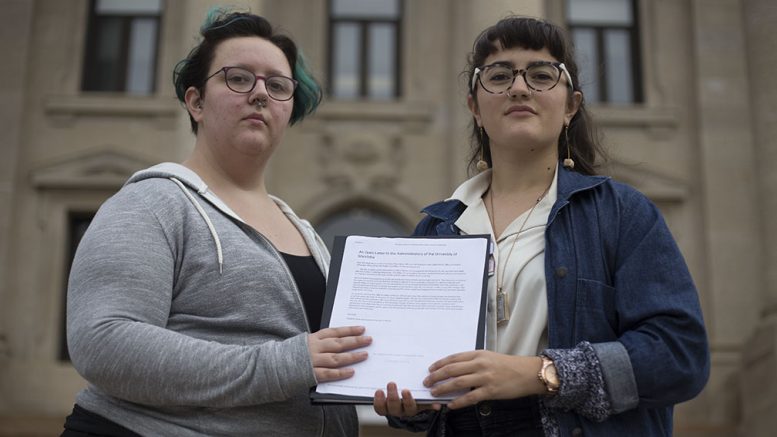 Students of the Descautels Faculty of Music, angered by the U of M’s poor treatment of the Kirby case, call on the university to admit their policies fail to keep students safe.

When the University of Manitoba faces a moral dilemma of its own making, the preferred course of action boils down to one thing: covering its ass.

Just recently, a plurality of students approached the media and made public allegations of sexual misconduct levied at the U of M’s fallen star Steve Kirby. While no criminal charges have been filed against the former jazz professor, two internal U of M investigations concluded that the students’ claims of harassment had merit, according to media reports.

Rather than being a trailblazer and taking action, the university administration pursed its lips and quietly announced Kirby’s “retirement.” This retiree then took up active employment in the form of a faculty position – since suspended – at the renowned Berklee College of Music in Boston.

The university’s actions in this case are in flagrant contradiction of the spirit of its own rules and regulations governing cases of sexual misconduct. While mandated by its own policy to “engage in public education, awareness and prevention activities” regarding sexual harassment, the university engaged instead in closed-door conversations and bad PR prevention activities in public afterwards. All this after – by its own lights – the university deemed it clear that Kirby has the stink of guilt clinging to him.

One might protest that the university has indeed been promoting public education, awareness, and prevention through its Sexual Assault Working Group (SAWG), a body whose goal is to prevent assaults and trigger dialogue on campus via public education campaigns. However, the public campaigns credited to SAWG have for the most part resulted from grunt work performed by student organizations like UMSU and Justice for Women.

Take a moment to gawk at empty bureaucratic politicking at its worst: the university administration, which holds most of the power on campus, sidesteps responsibility for installing and acting on accountability mechanisms and punitive functions within its policies, and instead creates a group that siphons off student activism while taking credit for the final product.

This is especially egregious given that our administrative bigwigs – the real movers and shakers at the university – have signed off on valuable initiatives without contributing in their unique capacity as the powers-that-be. They are the players that can make change happen across all structural levels – that is, if they could be bothered to. Their reaction to the Kirby case has shown they couldn’t be less bothered.

We do not need the university, as an administrative entity, to wax poetic on the valour of these projects; nor do we even need their active participation on the ground. It is not enough that the university grants these projects an institutional license, thereby enshrining their validity. If we want justice for survivors, then the university must flex its bureaucratic muscles for a purpose: the mandatory adoption of sexual assault policies that aren’t totally toothless.

Surely a case could be made in favour of firing Kirby for allegations of misconduct the university found merit in. It certainly has no qualms in doling out precarious labour contracts to sessional instructors by the dozens – so why exercise caution in this employment matter? Should one be feeling particularly generous, the thought could be entertained that the university did consider termination of employment. But we will never know because of the utter lack of transparency in these matters that – oh so conveniently – have the effect of saving face for the university.

So where the university can best help deal with sexual misconduct – by not only mandating but enforcing substantive, punitive regulations – it has failed the most.

Kirby was allowed to flee the U of M with dignity and grace, whilst his victims were stripped of plausible avenues of recourse given Kirby’s stature in the local music community and the potential for accusations against a prominent member of said community to stunt their future careers. The university administration could have thrown its considerable weight behind the women who were targeted and reversed this state of affairs.

Instead, the university turned off the lights and hoped nobody would notice anyone was home. Online references to Kirby’s time at the U of M have been virtually eradicated, and survivors were left in the dark by opaque formal procedures.

The collective egoism of the university administration was present when it looked after its own interests following the first allegations of Kirby’s behaviour – and it remains on display as administrative mouthpieces take to the media to defend their actions by appeals to privacy and, presumably, libel law.

Such behaviour may be perfectly acceptable legal practice. But that does not make the actions of our academic administrators ethical or palatable.

Listen to students and you’ll hear ‘education for all’