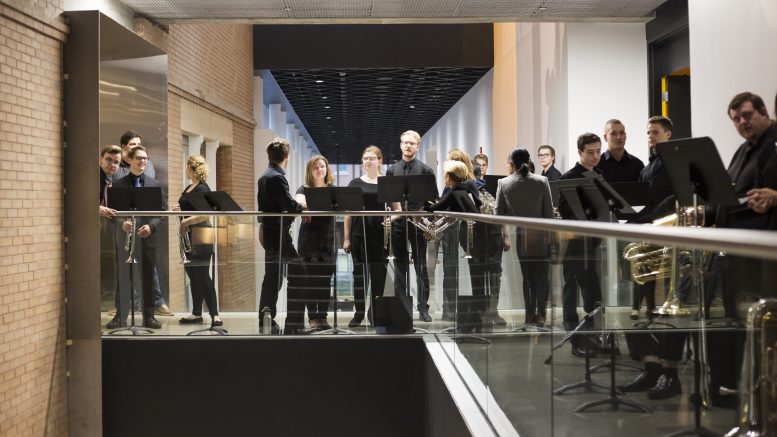 Taché Hall: Students of the School of Music prepare to perform in the newly opened Taché Hall Complex.

The announcement was made to a room filled with current students, alumni, faculty members, and donors. Edmund Dawe, dean of the Desautels faculty of music, announced the Taché Hall Arts Complex open.

Dawe expressed his excitement during the event and said “I am absolutely thrilled to declare this building officially open.”

Faculty of music students took to their instruments as they played beautiful pieces composed by professor Dr. Richard Gillis from the faculty of music, celebrating a significant day in history of the U of M. From hosting the Canadian Armed Forces during the second World War to being used as a filming location for the cast of Shall We Dance in 2004, Taché Hall celebrated rich history.

In 2008, the university began a renovation plan called Project Domino, through which several historically important buildings across the campus will be retrofitted and restored.

The first phase of Project Domino saw the completion of the ARTLab building beside Taché Hall, which opened in 2012.

The first phase of the project also included the completion of a new music library, office space, classrooms, and practice rooms which opened in the fall of 2015.

The transformation of the Taché Hall itself, to accommodate the faculty of music, constitutes the second phase of the project.

“This building that we christen this evening is part of a larger project that includes the renovation of our historic Taché Hall,” Dawe said during his speech.

“The final phase of this amazing complex will be the Desautels Concert Hall.”

The concert hall will be used as a space by students for rehearsals and performances.

“The piles are in the ground and the pre-foundation work completed, so we continue our journey with the goal of getting construction started on the hall this year,” he added.

Dawe shared his experience of coming to the university for a job interview in 2006, and discovering “a young saxophone student practicing in the men’s washroom.” Dawe said the student told him there was no other place to warm up before his class.

The new building was constructed with many special features, including modern walls, floors, ceilings and mechanical systems to dampen and isolate sound. The new rehearsal rooms are equipped with recording capabilities, making them flexible spaces for training musicians.

Bonnie Buhler, a philanthropist at the event announced the establishment of a $1 million endowment fund to provide scholarships for graduate students in the faculty.

“It is my hope that when there are students trying to decide whether they can afford their courses or they need to take on a part-time job, that they don’t have to make that sacrifice.” Buhler said.

Emma Johnson, a graduate student in the faculty of music, also gave a speech at the opening event.

“With the opening of yet another phase of this incredible facility, and the announcement of an amazing gift to graduate students, it is the beginning of a truly remarkable year,” Johnson said.

Students expressed their excitement and relief for finally moving into an all-inclusive new faculty of music complex.

“It’s kind of unreal. It’s such a luxury to have compared to what we used to have.” Elizabeth Sadler, a third-year jazz voice student said. “It’s wonderful that we can walk just a short distance and make classes on time,” she continued.

Sadler said she now hopes to get “a more enhanced rehearsal experience.”

Paul Klassen, a third-year student said, “I mean, just the sheer number of practice rooms has been a huge boon by itself.”

“We’re close. We’re here. We’re not way over there so if we want to go to the library between practicing it’s not 15 minutes it’s two.”