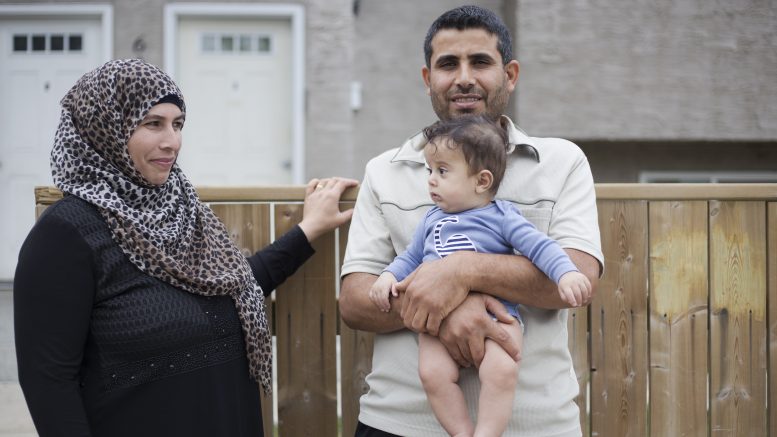 The Alhassans are one of six Syrian families living in the Dufferin Avenue housing complex, who, last week, woke up to find graffiti scribbled on their front fence.

Syrian families living in a housing complex on Dufferin Avenue woke up the morning of Sept. 19 to discover hateful graffiti scribbled on their fence.

Phrases such as “Go back to your country,” and “Leave Canada,” were later scraped off by one of the residents living on the property.

Six Syrian families live in the Dufferin complex where the graffiti appeared.

Kamal Alhassan and his wife, Amouna, who speak little English and were interviewed in Arabic, said the graffiti appeared after two months of constant harassment throughout the day and night.

Kamal said he saw the graffiti as he was leaving with his children to take them to school in the morning.

“I went out to take my kids to school. I went to the car and saw the graffiti.”

Winnipeg police have confirmed they are investigating the graffiti.

Kamal, Amouna, and their six children arrived in Canada a year-and-a-half ago.

They left Aleppo during the early years of the Syrian Civil War to live in Lebanon, where they registered with the United Nations High Commissioner for Refugees, also called the UN Refugee Agency.

The Alhassans lived in Lebanon for five years before making their way to Canada.

“We asked him later: ‘What if it was other than Canada?’” Amouna chimed in. “He said, ‘No I would not have gone.’”

“Here it is safe,” Amouna said.

“And honestly, if we did not get Canada, we would not have left Lebanon,” she added. “We would have waited for Syria to be restored for us to go back.” 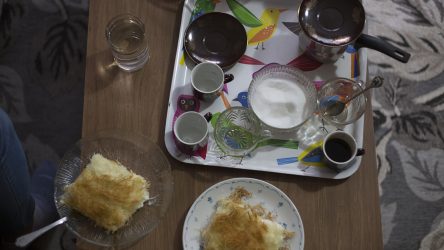 The Manitoban sat down with the Alhassans over tea, coffee and sweets to discuss repeated harassment in the neighbourhood and transition since beginning their new life in Canada.

Amouna said her family’s life in Canada has been nearly everything they expected it to be.

“But the snow,” she laughed. “We did not expect it to be this cold.”

Kamal said he used to work in the construction of cement buildings, in Aleppo and then Lebanon, “but it won’t work here. It’s all wood.”

On their future plans, Kamal said he hopes to continue learning English and then find work in construction.

Her husband said he wants to buy an old house that his family can later renovate on their own.

Kamal and Amouna said the harassment their family and neighbours have had to deal with began two months ago.

“Thankfully, we’ve lived here for a year and bit and we haven’t seen anything,” Amouna said. “It’s been two months since the problems have started.”

They said rocks and eggs have been thrown at their house. At times, their window screens were shaken at night and their garbage bins were tossed over.

In addition, they and the other families living in the Dufferin complex have suffered insults, including those directed at their children by others the same age.

“During the day it’s children,” Kamal said, “but in the nighttime, we don’t know who it is.”

“Our poor neighbour has been drowned in eggs,” Amouna joked.

The nighttime harassments would start at around midnight and later, Amouna said.

She said that a day after one of her children was threatened by another child to be set on fire, a house next door was set on fire, causing one of the neighbour’s windows to shatter.

“We were scared afterwards,” Amouna said. “What if [they] burned that house to burn us?”

Kamal said his family was planning on leaving the building after their two-year lease ends. But following the vandalism, he said he decided to book an appointment with Manitoba Housing to ask to leave their subsidized contract and move elsewhere. They’ve found a new house, and will be able to move to by the end of the month.

Kamal and Amouna said that they have not been bothered since the incident on Sept. 19 and noted the increased patrolling around their area. They spoke of the strong response from both the community and police since the graffiti appeared. They added that they believe their children are welcome at school since the principle took efforts to ensure their safety. 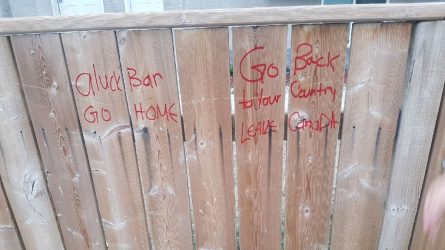 After discovering the graffiti, one of the residents scraped off messages such as “Go back to your country,” and “Leave Canada.” Photo provided by Kamal Alhassan.

Both said that what has been happening in the past two months is okay.

“They probably think that we are coming into their country to take their country. But of course, we’re not here for this. We’re like everyone else.”

Kamal said he doesn’t know what may have pushed people to target them. He wondered aloud if it might be due to jealousy, envy, or discrimination.

“Us Syrians, we’re used to being foreigners,” Amouna said.

“We did not know anything before coming here. I did not know how to write my name […] But now, thank god, things are better.”

“I went the other day, right after it happened, and I apologised on behalf of the community and offered my support,” he said. “I brought them some granola bars, books for the kids.”

Favel, who lives just around the corner, said that Bear Clan is “paying extra attention,” to the Dufferin Avenue block.

Bear Clan is a nonviolent, non-confrontational, volunteer-based solution for crime prevention, providing a sense of safety, solidarity, and belonging to community members.

“Our mandate is to protect and empower our women, children, elderly, and vulnerable members of our community,” said Favel. “We do this through relationship building, primarily, and a consistent presence in the community.”

Favel said that he has taken it as his responsibility to ensure the safety and security of community members.

“I don’t do this alone,” Favel added. “We have the average of about 25 volunteers per night.”

“We’re just trying to make their experience here better. They come from a war-torn country and to revisit that kind of horror on them while they are here, it’s not acceptable.”

Favel said he has overcome the language barrier by speaking with the Syrian families through an interpreter.

He added that based on what he has learned from community members, the graffiti may have been the work of a local minor.

“Let’s try to not blow this out of proportion,” Favel said. “If this was the act of a child – one 12-year-old child – then I don’t think the rest of Canada needs to shoulder the blame for it as well.

“But it speaks to the education that the child got at home and we need to make sure that we’re setting the proper values for our children.”

Favel noted that while this is the first time he has heard of something like this “so close to home,” he has not been immune to racism himself.

“We are an incredibly diverse country but we are not without our issues,” he said. “As an Indigenous male, I’ve dealt with a lot of racism in my time.”

On why he thinks the families on Dufferin Avenue have been harassed, Favel explained that this could have been the result of a lack of understanding, an issue with communication, cultural differences, or a “fear of the unknown.”

“People need to recognize that these people have the same needs as everyone else: home, employment, education, respect,” he said.

“Everybody needs those things and I want to see that everybody gets them.”