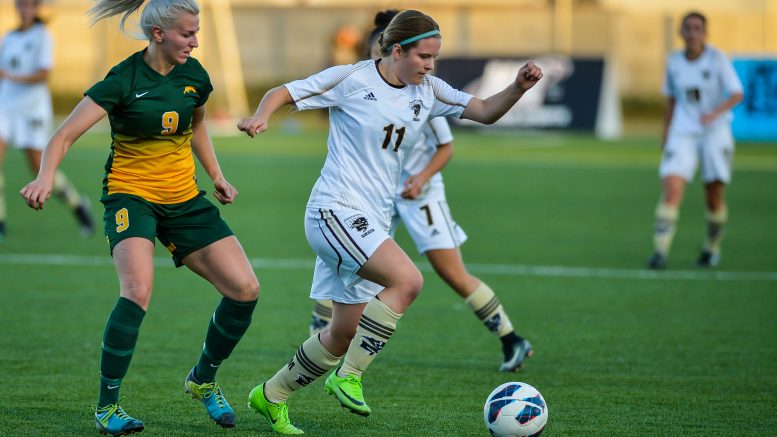 Bison midfielder Sara Schur fends off a Regina player during the home opener on Sept. 9.

Bison midfielder Sara Schur’s university soccer career has been the epitome of dedication and hard work.

Shur served as a practice player in her first season in 2014. Despite not playing in any conference games, she continued to work hard both on and off the pitch.

“I trained and tried to stay positive throughout it,” Shur said. “It was a little tough, but I ended up getting a lot out of it and I learned a lot from just watching and preparing myself and getting that mental toughness.”

The FC Northwest alumni’s diligence paid off in her second season, as she was able to become more comfortable with the pace and style of play at the university level. She also started in six of the team ’s last seven games that season.

“That was a little more exciting for me, and because of that, it sort of drew me to keep going, because I got a taste of it,” Shur said.

Arguably the biggest moment of the midfielder’s sophomore campaign, however, came in the season opener of her first-ever U SPORTS regular season game. She logged 64 minutes, and scored her first career goal.

“It was surreal,” Shur said. “Of course you hope that you’re going to score, but I was just hoping not to mess up and not to make any mistakes.”

Last season, Shur continued to improve, starting in all 14 conference games, and recording three goals and an assist. Additionally, the Bisons were able to make it back to the Canada West Select Six for the first time since 2008,  after upsetting Dinos in a play-in contest.

“Our team just was in disbelief from that game,” Shur said. “And I’ll never forget that feeling of when that final whistle blew and everyone just looked at each other and celebrated together. It was a beautiful feeling and a feeling I won’t forget.”

Prior to the start of the 2017 season, Shur’s commitment to the Bison program was acknowledged by her being named a co-captain along with Alanna Shaw, an honour that she said she doesn’t take lightly.

“I think it kind of showed that I was respected, as well, as much as I respected the program, Shur said.

“And I think it showed that the team believes in me and I hope to bring that back to them and hopefully they can count on me to be their captain or their assistant captain, and I hope to just do everything I can to make sure that we’re fighting for these nationals that we have coming up.”

In reflecting on her university career up to this point, the Miles Macdonell Collegiate graduate was quick to mention her current coach, Vanessa Martinez  Lagunas, who she said has helped instill in her an analytical approach to the game.

“I’ve definitely learned a lot more about the style of play, and formation and game strategy,” she said. “From being on a university team, I see more about how to play and I can analyze more of the games and see what you need to change and do better.”