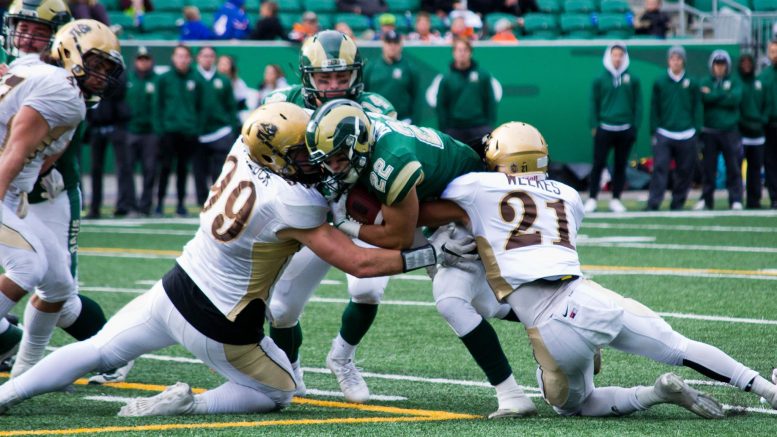 The University of Manitoba Bisons (1-3) took care of business on Saturday afternoon at the new Mosaic Stadium, upsetting the sixth-ranked Regina Rams (2-2) 18-16.

With the victory, the Bisons avoided their first 0-4 start since 1998, and bounced back after a gut-wrenching loss to Calgary the week prior.

“We lost by 59 points last week but our guys didn’t quit,” Bisons head coach Brian Dobie said postgame. “We have fight in us, and maybe we’re not the best team in the country right now, but our team has fight and it showed today.”

Manitoba never trailed in the contest and the defence forced four turnovers – including a pick-six from safety Jayden McKoy that would end up being the difference in the game. McKoy finished the contest with two interceptions, and was easily the game’s MVP as he moved from his natural halfback spot to replace an injured Tyler Fong, and looked comfortable manning the deep third for the Bisons.

Offensively, Des Catellier got his first career start at quarterback, and did an effective job managing the offence, finising with 212 yards passing and one interception. He distributed the ball to eight different receivers and looked comfortable at the helm from start to finish, despite only learning Friday he was getting the nod against the Rams.

The Bisons led 15-0 at halftime, thanks in large part to optimal field position, as their offence was frequently set up on Regina’s side of midfield.

Regina made a valiant comeback effort in the second half, led by receiver Mitchell Picton, who had 136 yards on nine catches. But luck wasn’t on the hosts side, as kickers Daniel Scraper and Thomas Huber combined to miss two field goals – the second of which would have tied the game at 18 in the final minute of play.

Next up for the Bisons is a home tilt against the Alberta Golden Bears on Friday at 4:30 p.m., as they look to get back in the race for a top four playoff spot.