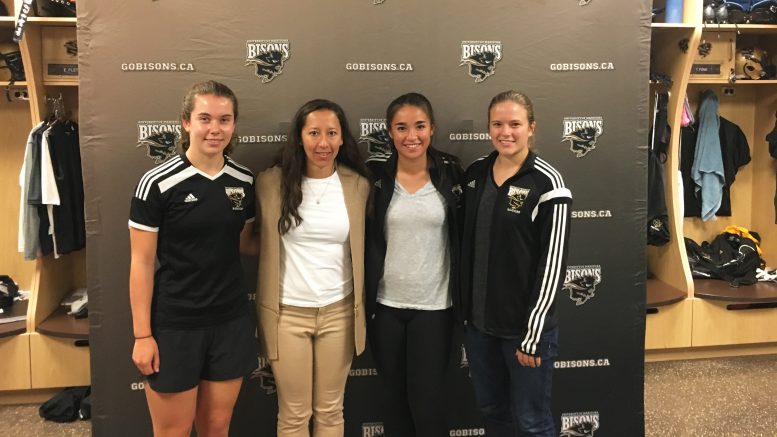 The team unveiled its captains for the 2017 season at a press conference Aug. 29.

Wong, a 2016 Canada West Second Team all-star, has worn the armband for the Bisons since 2015. She was a co-captain her first year, and took over the captain duties in 2016. Last season, she led Manitoba with five assists, good enough for fifth in Canada West.

“I think it’s a great opportunity to lead the team and be there for your teammates, someone for them to look up to,” Shaw said.

The U SPORTS women’s national soccer championships are being hosted by Manitoba this year and Wong said the team has been putting in work on and off the pitch to prepare.

“We’ve been basically thinking of it since we heard about it last year, since the end of the season,” she said. “We’re working really hard and doing lots of extra work whether it be sports psychology or sports nutrition to fully prepare us for that.”

Hosting nationals puts Manitoba in the spotlight, which could potentially draw some recruits in the future, said Schur.

“I think this is going to be a really great opportunity,” she said, “because it shows that Manitoba can compete with some of the other teams.”

Another factor will be the cool fall weather, which will be advantageous for the hometown Bisons, according to Wong.

“We’re used to Winnipeg winter and the national championships will be mid-November so plans are to host it outside,” she said.

“Lots of [teams from] these places won’t be used to that kind of weather and playing in that, so I think that would be an advantage for us.”

The road to the national championships starts for the Manitoba this weekend, with the Bisons hosting the Regina Cougars on Friday at 7 p.m. and the Saskatchewan Huskies on Saturday at 7 p.m.