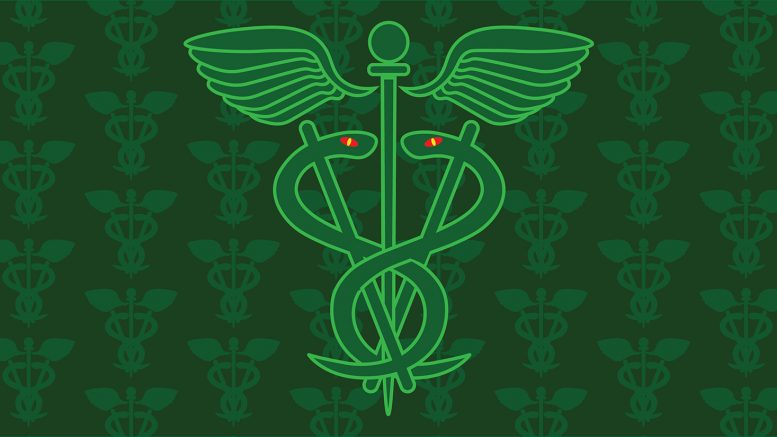 “The only thing better than tonight in Manitoba is tomorrow,” crowed Progressive Conservative (PC) leader Brian Pallister the night of his election win. When speaking to a throng of party faithfuls – devotees, even – the future sounded bright. With the NDP’s 17-year-old political machine finally dismantled, Pallister, overjoyed, waxed poetic.

“All Manitobans are going to walk out into a beautiful spring morning and they’re going to look up and the sky’s going to be blue,” he added.

Yet clouds have since gathered on the Manitoban horizon. Swept in by the winds of austerity, the Tories’ blue skies – known federally as the Grits’ “sunny ways” – have been obscured as Pallister assumed office and began queuing up social programs for the chopping block.

The latest target comprises a massive network of workers and complex social infrastructure which forms the bedrock of the modern welfare state: lined up next at the budgetary guillotine is healthcare.

Pallister’s parsimonious PCs have outlined a plan to gut an elaborate system of healthcare provision in the name of efficiency, no less. At a time when Manitoba is currently without a renewed long-term agreement on federal health transfers, which the government claims would cost the province $2.2 billion in reduced funds over the course of a decade under current negotiations, the best and brightest advice coming from the premier’s office was to respond in kind with provincial cancellations and cuts to healthcare projects totalling over $1 billion.

The logic at play here isn’t befitting of a first-year philosophy class, let alone the inner circle of government policy wonks. How a cumulative $3 billion reduction in healthcare spending – and a consequent reduction in working care providers and available hospital resources – will lend itself to efficiency, only the gods of austerity know. What we do know is that the government went into high gear in order to justify its budgetary beatdown.

In a recent interview with the Winnipeg Free Press, Pallister defends his budget-cutting battle royale by citing the looming threat of a $1 billion budget deficit, for which he heaped responsibility upon the previous NDP government. However, this is a red herring exposed by his very own finance minister, Cameron Friesen. Upon assuming office, Friesen released information on the 2015-16 fiscal year that shows an updated projected deficit of only $846 million. Evidently thinking ahead to the next election, financial doom and gloom is and continues to be strategically laid out in order to prop up the newly minted Pallister government’s starring role as the economic savior of the province.

Pallister further claimed that cuts were due because the province’s spending had outpaced both reason and other provinces’, without any evidence showing tangible improvements in care. Yet another misnomer: a 2015 report issued by the Canadian Institute for Health Information shows that while Manitoba spends more per capita than the national average, Newfoundland and Labrador actually tops the chart. Per capita spending on healthcare in Manitoba is a mere hundreds of dollars away from the spending of fellow Prairie provinces Saskatchewan and Alberta. Additionally, the cost of providing healthcare has been rising not only provincially and nationally, but globally, something today’s government has acknowledged. Existing provincial spending hardly amounts to the alleged bureaucratic behemoth of a health administration the Pallister government now claims to have begun slaying.

The PC government has also been working overtime in its broader rhetorical justification of the looming cuts. Mentions of past government waste, bureaucratic bloat, and talk of the need to make hard decisions constitutes all of the PCs PR portfolio. Unfortunately, it has paid off; with only major unions mobilizing organized resistance against Pallister, he remains Canada’s second most popular premier – but only until the targets of his cuts begin to feel the sting.

The new financially friendly government of Manitoba has dictated to the Winnipeg Regional Health Authority (WRHA) that it must shrink spending by $83 million this budget year. The WRHA has also been instructed to reduce non-unionized management positions by 15 per cent, which comes to a tally of 132 positions.

And let’s not forget about the front-line. Health care aides – the bread and butter of care provision, if you will – are caught in limbo as the province finagles to find just how close to the bone it can get away with cutting. All union representatives have been told is that as many as 215 health care aide positions are in jeopardy and that the WRHA will seek to provide but cannot guarantee new employment for those laid off.

Health care aides are charged with carrying out the physical task of caring for patients, performing the menial labour which transforms treatment into care provision. Health care aides perform the duties necessary for the functioning of any halfway decent hospital. That the province has failed to be even basically transparent in its directives is cruel and unusual for both the under-appreciated workers whose livelihoods these cuts threaten and the vulnerable patients who rely on the aides.

Further cuts will result in a centralization of medical service as half of Winnipeg’s emergency rooms and clinics around the city are to be closed in the race to efficiency. This includes the privatization of both adult outpatient physiotherapy and occupational therapy.

I suppose that while austerity means government must spend less on its citizens, that doesn’t mean the citizens can’t pick up the slack and spend more themselves. Economics 101 with Pallister and the penny pinching PCs also includes raising fees for services unique to seniors. This while the population continues to age, leading to the placement of more and more elderly people into care. Nothing quite like marginally financing public healthcare at the personal expense of senior citizens.

What this government thinks it has in money sense, it loses in common sense: for the basic principle of social security is to ensure no constituent falls below a bare minimum of lived decency. Decency does not include forcing someone who is meant to live under universal healthcare to pay for necessary physical therapy. What is as wicked as it is indecent is the government contemplating the introduction of a surcharge for incontinence pads, adult diapers, blankets, and washcloths. Then again, why be clothed when budgets can be balanced?

Society has grown aware of the importance of treating mental health as part of providing adequate care. The Manitoba government has not: cuts have made it so one recreational therapist will be left, where there are currently three, to cover five mental health units at the Health Sciences Centre. Adding insult to injury, Pallister’s rejection of the federal government’s health transfer agreement meant a rejection of funds targeted for expanding mental health services. Alongside funding cuts and denials, the government lacks a contingency plan for mental health that goes beyond its general strategy of “spend less.”

Amid growing recognition of the damage being done to rural communities due to lacklustre funding from governments, cuts have resulted in rural Manitoba – in the grips of a critical shortage of doctors – losing a multimillion dollar provincial tax incentive that helped position medical students outside of urban centres. While the tax incentive was not a perfect solution to equalize care provision, it at least lent itself to providing medical infrastructure to rural communities. At any rate, serious government policy does not just slash and dash, especially when program replacements are necessary.

The strategy behind Pallister’s healthcare reforms stems from two reports. The first was ordered by the prior NDP government and co-authored by a doctor at a health care consulting firm. This report was released publicly and recommended the consolidation of emergency care resources in fewer hospitals, which the PCs clearly took heed of. The report also called for investment in mental health, maternal health, and palliative care among 10 other identified priority areas.

The second report was conducted by KPMG, an accounting firm working in the private sector. The government sought out KPMG in order to identify inefficiencies in Manitoba’s healthcare system. Alarmingly, this report has not been released to the public.

The Pallister government’s actions – backed by the arguments of unaccountable financial interests presented in a secret report –  amount to preliminary attempts to carve out markets in Manitoba healthcare for efficiency’s sake. The importing of market logic from the private sector into public health constitutes the crux of the PC’s reforms: it explains the apparent trend toward privatization of certain health services, the introduction of surcharges, the streamlining of services, sweeping cuts, and widespread job reductions.

The PC’s plans may make sense, or even begin to be tolerably palatable, if these changes were to a different sector. Yet market logic will not produce the results being sought in healthcare because the profit motive is not proper to the administration and delivery of care in a publicly funded universal healthcare system.

Changes to healthcare should hone in on innovative policy measures and building a wider, yet targeted, service net – not shredding it altogether. For the sake of public health, state-run care provision requires a dynamic, robustly resourced apparatus so that it can meet the needs of the people. This calls for the investment and repurposing of our current framework, rather than its divestment or disposal.

While the anxiety to act for the improvement of the healthcare system is understandable, the Manitoba government’s newfound reliance on market logic will not save us; it will only condemn those in care whom are subjected to its whim. Meanwhile, Pallister is all too pleased to lay them bare on his government’s altar to austerity.