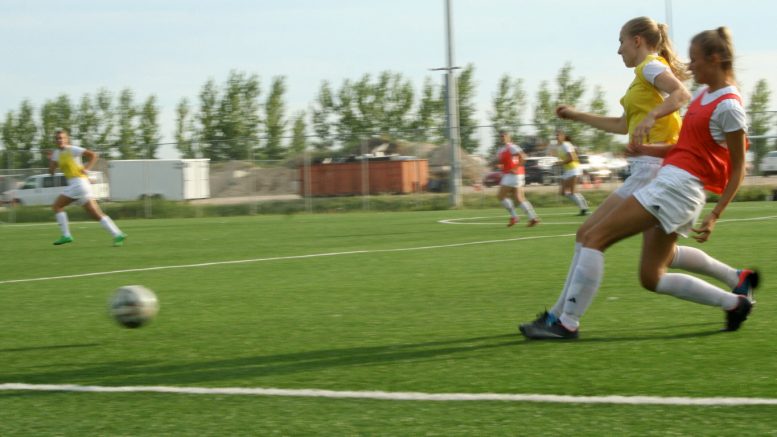 Bison women's soccer team practicing ahead of their regular season opener on Sept.8.

If you ask the head coach of the women’s soccer team, Vanessa Martinez Lagunas, there’s no better time to be excited about soccer at the University of Manitoba.

In June, Investors Group Field hosted Canada and Costa Rica in a women’s national team match, and this month Manitoba hosted the Canada Summer Games , which included both men’s and women’s soccer.

Now, the university is taking the next step and in November the Bisons will host the 2017 U SPORTS Women’s Soccer National Championship for the first time in program history.

“A big portion of the [national championship] bid was to show that our team has progressed throughout the years, and they [the voting committee] saw that since 2013, the team has gotten better and better every year, so definitely that was huge,” Martinez Lagunas said.

“If the team had not shown progress, even with the facilities, we would have never gotten the national championship.”

This is the first time the Bisons will get the chance to play at the national level against the best teams in Canada, and it couldn’t have come at a better time based on the way Manitoba’s roster is shaping up.

“I’m very excited about this group because it’s a great combination of returning players and new players,” said Martinez Lagunas. “I think that the mix is going to be very exciting and it’s just going to help us keep showing progress.”

A multitude of returning players will help anchor the Bisons in 2017, led by midfielder Amanda Wong, who returns for her third year as captain. She’s also fresh off of a stint as one of Team Manitoba’s assistant coaches for the Canada Summer Games.

Midfielder/defender Emma Romanica, an incoming recruit and former captain of the St. Mary’s Academy team, was on Manitoba’s roster, and Martinez Lagunas noted the importance of both players’ participation in the games.

“They’ve already had the experience of being at home with the pressure on,” she said.

“The Canada Summer Games are very similar to our national championship, so definitely that experience is going to help them translate onto the field and just help to transform the pressure of being at home to help improve your performance.”

Martinez Lagunas seems to add a bit of international flavour to her team’s roster every year, and 2017 will be no different with German midfielder Florin Wagner entering the fold.

The 22-year-old was one of the best players in the German state of Saxony and was also in the pool for the U16 and U17 German national team in the past.

She has a prior connection with Martinez Lagunas, as the latter had the opportunity to work with her during her time  as a coach in Germany.

“[Florin] is going to be a great addition to our team and her experience is going to be so valuable for what we’re going for this season,” Martinez Lagunas said.

With the addition of Wagner, the Bisons now have three international recruits on their roster: fourth  year Brazilian striker Bruna Mavignier and second year American midfielder Abby Eggers are both returning for the 2017 season.

“I like to have groups that are diverse. It just enriches the experience of the student athletes,” Martinez Lagunas said.

Other players to keep an eye out for this year are third year midfielder Sara Schur, who developed into a starter last season and will be an assistant captain in 2017, as well as second year Shaylyn Dyck, who was both rookie and defender of the year in 2016.

Manitoba kicks off the regular season at home against the Regina Cougars on Friday, Sept. 8, at 7 p.m.

Fastest winger in the West