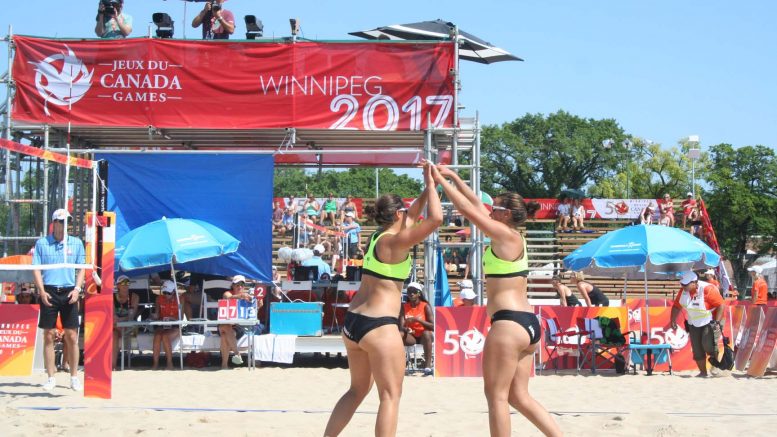 University of Manitoba Bisons Kearley and Josie Abbott celebrate a point at the Canada Summer Games Sunday. The pair, representing Manitoba, won their round robin opening game over New Brunswick in straight sets.

Twin sisters Kearley and Josie Abbott are two of the top indoor volleyball players in Manitoba.

They are coming off a tremendous showing in their rookie campaigns with the University of Manitoba Bisons, and now the duo are making their mark on the beach volleyball scene representing Manitoba in the sand at the Canada Summer Games.

The Saint Mary’s Academy alumni each started playing the indoor game in Grade 8, and it wasn’t until four seasons ago that the 5-foot-11 outside hitters made the move to the outdoor game.

“I like being out in the sun, I like spending my summers in the sun, and also it’s just great cross-training,” said Josie when asked about transitioning to beach. Manitoba beach volleyball duo Kearley and Josie Abbott have been building a reputation since taking their game to the sand in 2014.

It didn’t take long for the sisters to become comfortable playing in the sand, due partially to their ability to lean on each other, especially if one is being targeted more.

Their comradery and teamwork was evident early on, as the pair took home gold in their debut at the under-16 Eastern National Beach Championships in 2014. It was the first national title at the under-16 level for a Manitoba team since Taylor Pischke and Rachel Cockrell did so in 2008. That’s pretty good company, considering the success the two former Bisons have had over the past decade.

“Our first year we didn’t really know a lot about it [beach volleyball], but we were able to win the Eastern Championships and then every season since then we’ve just been making little growths leading up to the [Canada] games.”

Fast-forward to 2017 and the duo are representing Manitoba all week in their own backyard.

“I think it’s really exciting because at all the other events we’ve played at, we’ve never been at home in front of our friends, family and just Manitoba supporters, so I think it [playing at home] just makes it extra special, the experience,” Kearley said.

The sisters got off to a strong start in their first round robin game Sunday, with a straight sets victory – 21-13, 21-13 – over New Brunswick at the Sargent Park Beach Volleyball Centre.

“It was very exciting just seeing everybody out in this beautiful venue. We were happy with the way it went and we’re ready to build off today,” Josie said. “We can find the problem [on the court] without offending each other and fix it really quick,” said Josie Abbott of the pair’s chemistry.

Both agreed that the communication and support they offer each other as siblings is a big part as to why their team dynamic has worked so well up to this point.

“We can find the problem [on the court] without offending each other and fix it really quick,” Josie said.

“It also helps to have someone with you all the time to practice when you want to practice and when it’s a good time for you,” added Kearley.

“And also just having a support system – we’re best friends.”

Manitoba’s women’s beach volleyball team is back in action tonight at 7 p.m. against Nova Scotia.

Ready for a championship