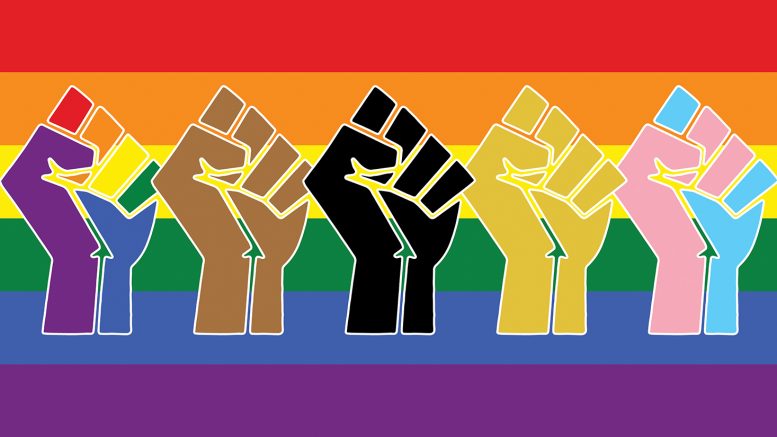 On the afternoon of June 3, two groups just happened to be in the same place at the same time. One, the organizers of Winnipeg’s first ever Trans March , slated to start in hours: a rally preceding the city’s annual Pride Parade. The Trans March and rally formed in response to the critique that Pride has failed to represent queer people of colour and gender-nonconforming members of the LGBTTQ* community.  The second group had assembled to protest  Motion 103, a federal condemnation of Islamophobia and religious intolerance at large in Canada. Critics of the motion have erroneously likened it to an attack on free speech, failing to grasp the legislative processes of parliament.

Drawing the groups together was a coalition of anti-fascist demonstrators opposing the Motion 103 protest. When the anti-fascists approached, conflict spawned. In reaction, police arrived on the scene and began speaking with the anti-M-103 group. Then, a participant  of the Trans March identifying as non-binary – which is to reject both male and female gender identities – started to film the police.

What followed is a hard lesson learned for the future of queer organizing.

Mere hours before the Trans March began, a police officer seized the trans activist and bent them face-down on the hood of a patrol car, placing them under arrest and escorting the individual to the police station for temporary detainment – all because they refused the officer’s request to back up while filming.

This is the state of relations between the marginalized queer community and the police, the latter serving as the enforcing arm of heteronormative society. This is a classic relationship, echoing a conveniently forgotten past of state-sanctioned terrorization, when police raided queer spaces with impunity and acted as the foot soldiers on ground zero when it came to executing a legal system intent on the destruction of queer as a category. Homosexuality and gender nonconformity were pathologized by psychiatry, criminalized by politicans, demonized by Western religion, and ultimately hunted.

I write that this past is conveniently forgotten given that Pride Winnipeg has allowed for the presence of ununiformed police members in the annual Pride parade, ignoring the trauma this agent of the state has imprinted on the queer community.

The latest in a series of revisionist events, modern day Pride Parades have increasingly been severing their ancestral roots, those which were planted at the infamous Stonewall Inn by gender non-conforming queer people of colour at the radical fringes of the LGBTTQ* movement. Perhaps most importantly, the seeds of queer rebellion were laid not only by the unapologetically queer, but in reaction to an epidemic of police brutality targeted at our community, concentrated along racial and class lines. As is seen by the contemporary embrace of an (albeit disguised) police presence at its parades, what has become of Pride serves only the interests of complacent liberal apologists.

Failing to present a coherent rejection of the status quo, Pride has become a forum in which power is embraced instead of challenged. No longer does Pride act as a site of queer activism: once a place where society was forced to face the burden of guilt over its barbaric treatment of and attitudes toward the queer community, Pride has culminated as a mass apology from oppressed to oppressor over the oppression at hand.

Organizing, in Pride parades, is no longer a political act with accompanied political demands. The crux of its modern vision is to be successful in the extension of a harmless invitation: that society spend one day out of 365 dancing instead of vilifying the queer experience. Pride as it is observed today has shelved –  shafted, even –  the original insight of queer liberation: that society is foundationally shaped by structures upholding a narrative exclusive to the queer experience, and that liberation therefore requires its abolition.  Resistance, then, does not take the form of carving out a space for those who have been crushed, but rather through the radical transformation of society at large.

By effectively rubber-stamping the presence of police in what was once the most radical political formation of queer radicals and activists, Pride has continued to delegitimize its role as a political force, ignoring a rich history of activism in favour of embracing meek incrementalism.  Indeed, the behaviour exhibited toward the detained trans activist by a member of the Winnipeg Police comes at a time when Pride marchers have, tragically, become party-goers. This is the endpoint of any movement that rejects a principled history for trendsetting and popularity, one which swaps out substance for style.

To be fair, this year’s Winnipeg Pride  made concerted efforts to revitalize Pride’s political trappings with the theme “Resurgence: Taking Back Space,” following a pointed critique much like the one I am currently presenting, that being: Pride has lost touch with the most marginalized of the groups it is meant to represent. The critique is sound, and so was Winnipeg Pride’s response.

Representation is vital for affirming the validity of queer experiences in ubiquitously straight spaces. Yet representation alone is not enough. Beyond the acknowledgment of existence, we need support for that existence. In its bid for increasing general acknowledgment of the LGBTTQ*  community – through making its events overwhelmingly straight and thus diminishing its queer presence – Pride has  lost the political capital required to demand necessary supports for its core constituencies due to its increasing focus on making space for the non-queer. In other words, Pride’s capacity for change has been severely diminished due to its anchoring in straight comfort. It must now toe the line allies deem fit or risk losing relied upon support – support that comes from a place alien to the queer experience. Ultimately, this is a course which sees political slogans replaced by feel-good hashtags as are chants drowned out by the steady rhythm of pumping EDM crowd-pleasers.

It is quite clear that Pride, by abandoning its radical bona fides, has embraced the political centre for the sake of publicity. But this move to the centre is one that focuses exclusively on the issue of representation. To do this is to fall into modern liberalism’s  identity politics trap. This is an identity politics that cares not for the materiality of lived queer experiences – one which abstracts away and distances itself from the socio-economic realities faced by the most marginalized.

Liberal identity politics call for roles for cis, gay, white men in Hollywood blockbusters while giving trans roles to straight, white, cis men. Liberal identity politics assert that to spend a day dancing in a Pride parade is itself a sign of victory, of unity, of alliance. It is this which the queer community must challenge, for unlike our right-wing foes, these fallacies present themselves under the guise of friendship. To ignore the structures which produce queer hardship, and to focus exclusively on the abstract notion of a queer identity isolated from its material context, is to cripple the capacity for the agitation, organization, and mobilization necessary for queer liberation.

We cannot allow a foundational queer rally, at its inception commanded by trans radicals, to be strangled by the hold of a complacent, white, upper-middle class. The way forward is through the creation of a manifesto that future parades will serve as a vessel for, one which will speak to the individual lived experiences of marginalized queer individuals by addressing the societal structures that produce them.

Skeptics will say that my words are extremist and uncalled for. But what is truly extreme is that queer identities are still linked at disproportionately high rates to the onset of mental illness.  What is uncalled for is that to be queer is to be a more likely statistical candidate for homelessness, where experts speculate 25-40 per cent of homeless youths identity as LGBTTQ*.

While Pride is, to be crass, a fun time, it is not enough to suspend a year of bigotry for a single day and expect justice to be served. Queer existence must be shown, yes, but it also must be supported, reaffirmed, and normalized in a way that does not alienate queer individuals whom straight society finds most threatening.

And so, to achieve justice requires that Pride returns as a political vanguard. The origins of Pride are those of bricks being thrown through windows, both physically and ideologically. The Gay Liberation Front, for instance, was a revolutionary queer coalition born amid riots which months after the events at Stonewall organized commemorating marches along principled anti-capitalist, feminist lines while espousing public support for the Black Panthers. This is the political paradigm contemporary Pride parades ought to follow, should queer organizing ever convey anything more than the bland liberal apology that gay is okay.

For starters, parades ought to make a series of demands that would go far in reducing the institutional harm queer youths face: a robust public model of subsidized housing, to fight the homelessness crisis; a new paradigm of mental health services, one friendly to the queer community, starting with increased access to mental health services; and a total revamp of the education system, especially at the elementary level, in order to increase queer visibility.

Pride must cut ties with its complacent politics or face defeat. Welcoming police offers among our midst and catering to establishment interests amounts to swallowing a political cyanide pill. It is a  return to radical roots, not an unholy alliance with polite defeatism, which is necessary if queer liberation is ever to come about. Unrelenting political demands are the next step – not tokenized tangos on the street with part-time allies.