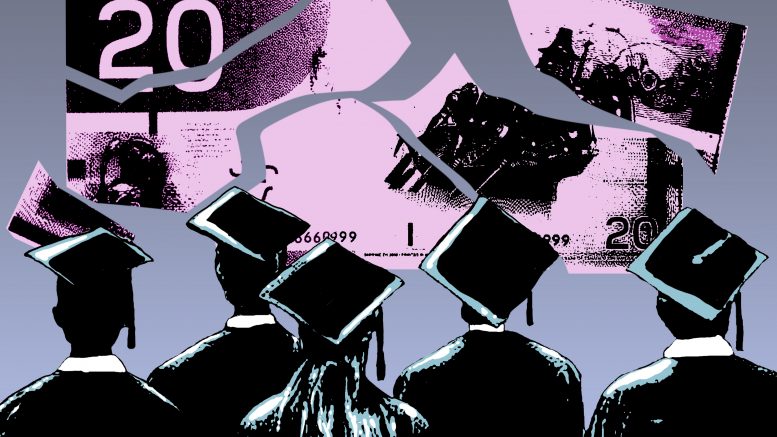 UMSU sucks and we all know it . It’s been said many times before and will continue to be said, but the reality is we can no longer wait for a failed union to become a success. On March 20, the provincial government announced its plans to raise the cap on post-secondary tuition fees in Manitoba, which have been tied to the rate of inflation since 2012.

The proposed legislation would allow the University of Manitoba administration to raise tuition by five per cent plus the rate of inflation annually. U of M president David Barnard has publicly expressed his desire to raise tuition by $2,000 in order to “catch up” with Saskatchewan. This increase would damage the ability of students to access post-secondary education and would significantly impact their financial prospects upon graduation in a province where average student debt is in excess of $25,000 per student.

How are students supposed to take out a mortgage, pay for rent, get a car loan – to start their adult lives, really – if they have $25,000 in debt hanging over them? This, compounded with the fact that the minimum wage has been frozen under the new Progressive Conservative government, has students’ financial outlook looking even bleaker than before.

UMSU’s official position is unconditional opposition to all forms of post-secondary user fees, including tuition, but it is unclear whether the union will mount a significant opposition to pending increases. UMSU is structurally unable to effectively resist tuition increases, and is generally limited to writing spineless, cloying press releases and letters. We need to adopt a strategy of mass struggle to oppose tuition hikes and to fight for our interests in an increasingly precarious world.

What is to be done?

We need to organize on a smaller scale. Trying to organize 25,000 undergraduate students from an office of five executives and a dozen staff is like trying to herd 25,000 stressed and sleep-deprived cats. That’s not some jab at the executives or of council, it’s just the reality of an institution in which a grand total of 53 people are elected to represent 25,000 students. Most students have no interaction with UMSU besides getting a bus pass, dealing with the health plan, or maybe once a year voting for five people whose faces cover every conceivable surface of campus.

This is at the heart of why UMSU sucks: students have no meaningful say in how it works and don’t feel any kind of direct connection to the organization.

What really needs to happen is organizing on a small scale  and giving students direct democratic power. Organizing on a departmental and faculty level would help to build a robust movement that mounts a strong opposition to the harmful policies of the government and university administration.

There are personal and political reasons that organizing on a micro-scale is more effective. From the perspective of the students, it is far easier to get involved at the departmental level because that is the level with which students are most familiar. They know the people in their department, they take classes with them, where they have probably made friends. Organizing at the local level takes away the impersonality of large institutions and makes students actually want to participate.

Most of us young people have grown up in a country or countries where mass popular struggle is but a fading social memory. We’ve seen a resurgence in mass political movements through Black Lives Matter and the Bernie Sanders campaign, but this is a far cry from the social movements of the 1960s and the labour struggles of the first half of the twentieth century. These movements are examples of the power of grassroots organizing. What we need are new, invigorated social movements to take on the very real threats that we are facing today.

Beyond tuition fees, we are facing an environmental catastrophe that our leaders refuse to seriously deal with, a resurgence of racist ultra-right nationalism in our country, and economic policies that undermine our healthcare, education, and equality.

We live in a world where the Middle East has been thrown into chaos by western powers. A world in which eight men control as much wealth as the poorest 3.6 billion people and corporate interests control the political discourse.

We see and sense these problems yet feel entirely powerless to do anything about them. But we are not powerless. Political and economic power may be held by very few but we are the majority and we must come together to exercise our collective power. The most effective movements are the ones that are able to harness the collective power of the people.

Look at the civil rights movement. Black communities organized themselves into local chapters of civil rights organizations. Masses of people took to the streets, took direct action in the fight for their rights and won massive gains.

Look at the labour movement. Militant workers won the right to the eight-hour work day, safe working conditions, maternity leave, and many other things we take for granted. These things were won through mass actions such as strikes, work slowdowns, and marches. Workers faced violent repression at the hands of the police and the state (as in the 1919 Winnipeg General Strike) but continued to fight. And just five years ago, 250,000 students in Quebec walked out of their classes and into the streets in the face of tuition increases and won a massive victory, stopping the fee hikes and toppling a provincial government in the process.

Tuition hikes are coming. Massive cuts to social supports that will crush the poor and vulnerable are coming. The concentration of wealth in the hands of the few is only getting worse. Racists are walking out in the open again. The climate is getting warmer. Institutions like UMSU cannot and will not protect us from these things. We’re going to have to organize in our communities, in our faculties, and in our departments to build the kind of mass movement that will be needed to take control in light of what is coming.