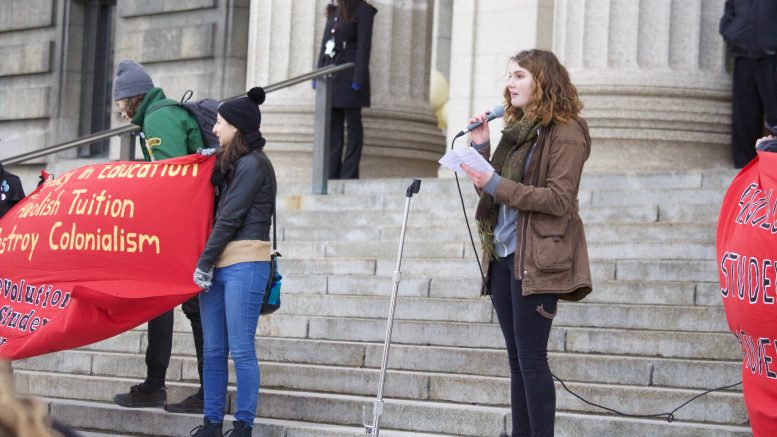 A group of post-secondary students gathered on the steps of the Manitoba Legislature Tuesday afternoon to protest the PC government’s recent introduction of a bill that would allow universities and colleges to raise tuition.

The demonstration, coordinated by the University of Winnipeg chapter of the Revolutionary Student Movement and the University of Manitoba Student Action Network (UMSAN), was organized to oppose impending tuition hikes, according to protester and UMSAN member Elizabeth McMechan.

“It’s important that we show up because the government needs to see that we’re going to defend our education and we’re not going to sit quietly and allow them to take these measures, which are making education more inaccessible,” McMehan said.

“To come here and watch Pallister increase my tuition is really upsetting.”

Bill 31, which was introduced last month by Minister of Education and Training Ian Wishart, will allow post-secondary institutions to hike tuition rates by five per cent plus the rate of inflation annually, beginning in 2018.

The bill will amend legislation put in place by the previous NDP government in 2012 requiring post-secondary institutions cap tuition hikes at the provincial rate of inflation.

The 2012 legislation followed a more than decade-long tuition freeze, which was lifted in 2009, allowing post-secondary institutions to hike tuition by 4.5 per cent.

“My initial reaction was unfortunately not much of surprise,” said McMechan. “I think a lot of us expected this from the PC government. My first reaction was that it’s time to organize.”

Just over 200 people were listed as attending on the group’s Facebook page, but only around 50 people ended up attending.

UMFA president Mark Hudson attended the demonstration, however no representative from UMSU was present.

UMSU initially agreed to charter a bus for U of M students wishing to attend the demonstration from campus to the legislature, but according to UMSU president Tanjit Nagra, UMSAN did not provide an estimate of how many students were planning on joining until the easter long weekend. At that point, it was too late to receive permission from the university and organize a bus rental, according to Nagra.

Speakers at the protest included members of the Revolutionary Student Movement, U of M global political economy professor Radhika Desai, and McMechan.

“This is an opportunity to make a significant difference,” said McMechan. “I hope students will continue to organize and show up to events like this.