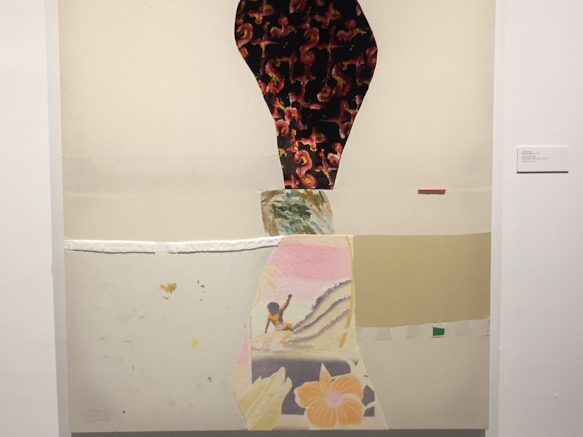 Board sports are, at their core, about working with the surrounding environment, be it concrete, ocean, or snow, rather than attempting to control it. Boarder X seeks to highlight the way in which Indigenous individuals can challenge the mostly-Caucasian status quo of board-sports and perform Indigenous conceptualizations of nature through their practice.

The Boarder X exhibit carries themes of land navigation and respecting nature. Entering the exhibit, the viewer’s focus is first drawn to Mason Mashon’s giant photograph of a lone snowboarder on top of imposing, scintillating slopes, the largest piece in the main exhibition room.

Roger Crait’s colourful, bold painting is also eye-catching. Crait’s lively interpretation of urban life contrasts with the serenity of Mashon’s piece, portraying the sprawl and unbridled dynamism of the city that he skateboards through. Subtle messages like a sign that reads “IMFraud” and “This land is your land” are incorporated to the painting, along with an offensive “Indian” mascot cut out. There is protest and joy in Crait’s work, making the painting a critical but excited rendering of his city.

Meghann O’Brien – a snowboarder and textile artist – has an installation of suspended woven white balls in front of a painting. They appear to be weightless, suspended like giant snowflakes frozen mid-fall.

Videos on display also showcase the talent of different kinds of boarders navigating their urban or natural elements, as well as exploring their individual histories with their boards.

In description of their works, the artists collected all tie their art-making in with their boarding practices by seeing both mediums as forms of self-expression, acts of perseverance, and sources of identity creation and confirmation.

While the collection of pieces is fairly small, Boarder X still managed to highlight many different Indigenous boarders’ experiences.

Learn more about Boarder X, and about hours of operation and admission at www.wag.ca