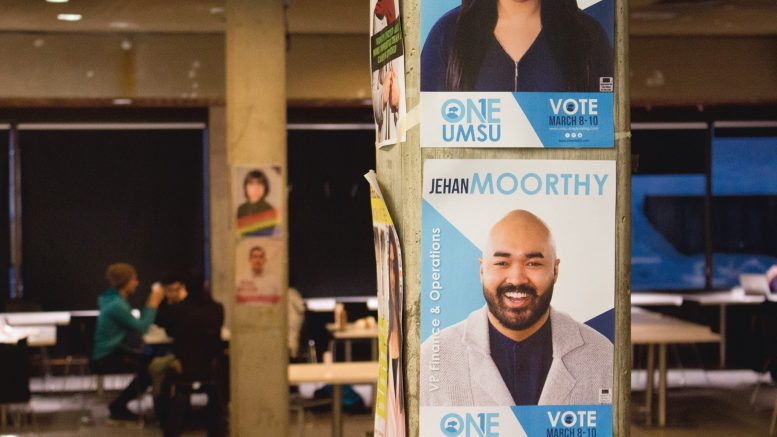 A University of Manitoba Students’ Union (UMSU) vice-presidential candidate has apologized for comments made in November regarding a federal government bill that would provide further protections for transgender people in Canada.

In a social media post from Nov. 22, One UMSU vice-president finance and operations candidate Jehan Moorthy criticized a government bill that would amend the Canadian Human Rights Act to add gender identity and gender expression to a list of prohibited grounds of discrimination.

In the post, Moorthy wrote: “could go to Jail and be fined for not referring to someone as ‘he’ or ‘she.’ Right how do I get off Planet Earth. I’ve had it. I’ve had enough,” and provided a link to Liberal justice minister Jodie Wilson-Raybould’s statement on the passage of the bill from Nov. 18.

The law, titled Bill C-16, would also amend the Criminal Code of Canada to extend protections against hate propaganda or offences motivated by bias, prejudice, or hate to transgender Canadians.

The comments are especially pertinent, as during a segment of One UMSU’s official campaign video released on March 2 , Moorthy discussed his slate’s goal to “promote and celebrate all of our students, no matter what their religion, race, gender, or sexuality.”

Former UMSU LGBTTQ* representative and transgender U of M student Theo DeSilva said he was “saddened” when he became aware of Moorthy’s comments.

“Someone that is running to represent all students on campus showed his disdain to using the appropriate pronouns for a person,” he said.

“As a transgender person, I do not feel that comfortable voting for someone who questions something that is as simple as treating me as the person I am.”

Moorthy apologized for his comments Monday in an email to the Manitoban, saying that he did not understand the ramifications of Bill C-16 when he made the comments.

“I apologize to the trans community for my insensitivity when making that post,” he said. “I realized I made a mistake and deleted it shortly after posting it.”

Moorthy also indicated that he is willing to take some form of sensitivity or ally training.

“Jehan is aware that UMSU recently passed a position statement that promotes an equitable campus and opposes transphobia,” she said in an email.

“He is aware that if he wants to be an acting officer of UMSU that he must represent this position to the best of his ability.”

“We are glad Moorthy realized his mistake and we are glad he will have a more inclusive mindset moving forward,” Clayton said. “It is important that people on [UMSU] council realize they represent all students, no matter who they are.”

Clayton also said that RPM would offer ally awareness training in the future for any students “for learning opportunities on LGBTTQ* issues.”

DeSilva, however, said he was not satisfied with Moorthy’s apology and insisted the VP finance and operations candidate take the training.

When asked whether she thinks Moorthy should take some form of sensitivity training, Nagra said “I think all students should receive bystander intervention, consent culture, mental health first aid, allied, and sensitivity training. However, enforcing this would be very difficult.”