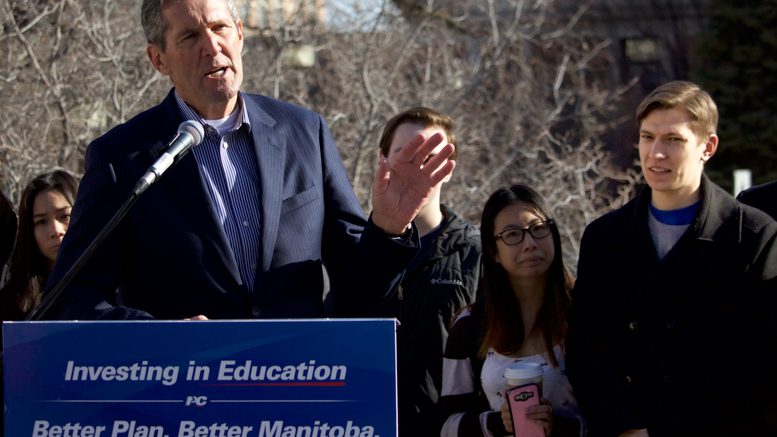 By Garett Williams, with files from Levi GarberMarch 1, 2017

And then there were three.

A second University of Manitoba Students’ Union (UMSU) executive member has stepped down in less than six months as the union announced last week that vice-president internal Adam Pawlak has submitted his resignation.

The announcement came more than two weeks after Pawlak was appointed as a minister’s assistant in the provincial Progressive Conservative government on Feb. 7.

This leaves the five-member UMSU executive short two members with the 2017 election beginning. Former vice-president student services Jessica Smith stepped down from her position in the fall.

An UMSU release issued Feb. 23 said Pawlak accepted a position with the Manitoba provincial government but will remain on in a voluntary capacity to finalize ongoing projects.

The resignation notice followed the appointment by 16 days and was issued after the Manitoban reached out to Pawlak for comment after questions were raised about whether the government position represented a potential conflict of interest.

Pawlak – who worked for the provincial Progressive Conservative Party between May 2015 and May 2016 – represented UMSU in September and October meetings with provincial minister of education and training Ian Wishart to discuss changes to the Manitoba Scholarship and Bursary Initiative (MSBI).

Under the proposed changes, the scope of the MSBI will increase to just over $20 million, with a third of that – up to $6.75 million – coming from the province if post-secondary institutions provide the remaining $13.5 million.

At the time, Pawlak said the changes “strengthen MSBI […] and put us on the right path so that everyone comes out on top.”

Multiple messages to Pawlak went unreturned. UMSU president Tanjit Nagra said she is prohibited from commenting due to her ongoing campaign for re-election, along with vice-president external Wilfred Sam-King. Dara Hallock, who is not running for re-election and the only other remaining executive member, was out of the office until March 1.

Pawlak was present at the last UMSU regular council meeting Feb. 16 but did not raise the issue of his appointment and submitted only a verbal report before leaving early. Several councillors reported only learning of the appointment through the Feb. 23 UMSU release.

“I was shocked to see that he had already begun a new job,” she said.

“It’s unfortunate to see another executive leave before completing their term. It is, however, a conflict of interest for an UMSU executive who is to be lobbying the government on behalf of students to also be working for the government.”

UMSU by-laws do not explicitly state holding a position in government presents a conflict and only calls for any appointee, signing authority, or employee to recuse themselves from participation in any decision they hold a direct or indirect material interest in.

Arts Student Body Council UMSU representative Serena Gawryluk said she was sad and surprised to hear Pawlak was stepping down.

“He was a great addition to the exec and I really enjoyed my time working with him on member services committee and space revitalization committee,” she said.

“He was very committed to his work on council and as much as I’m sad to see him go, I wish him all the best in his new position with the provincial government.”

Pawlak was instrumental in the roll out of the universal transit pass – branded the U-Pass – after taking over negotiations from the previous vice-president internal when taking over office in the spring of 2016.

In December, Pawlak publicly accused Winnipeg Transit of reneging on a commitment to support a grant that would compensate UMSU for some administrative fees relating to the program’s rollout.

After Pawlak argued UMSU’s case before the city’s executive policy committee in December and through follow-up meetings with Winnipeg Transit in January, the city’s committee on infrastructure and public works recommended UMSU receive a 0.5 per cent annual commission on all U-Pass sales, translating to $26,000 over the next four years.

Pawlak was also involved in a $1 million capital renovation of IQ’s Billiards Lounge, which is scheduled to break ground this summer. He will remain involved with UMSU on a voluntary capacity to finalize ongoing projects.

“It’s been an honour to serve the students at the University of Manitoba,” he said in a release. “A great opportunity arose to start my post-university career, but I will miss all of my wonderful colleagues here at UMSU.”

Pawlak’s resignation will go before UMSU council at its next regular meeting March 9. His term was set to expire April 30.

UMSU council can vote to appoint the incoming vice-president finance and operations (the new title for the vice president internal) and vice-president student services to their positions early following the 2017 executive elections.

Voting is scheduled to run March 8 to 10.