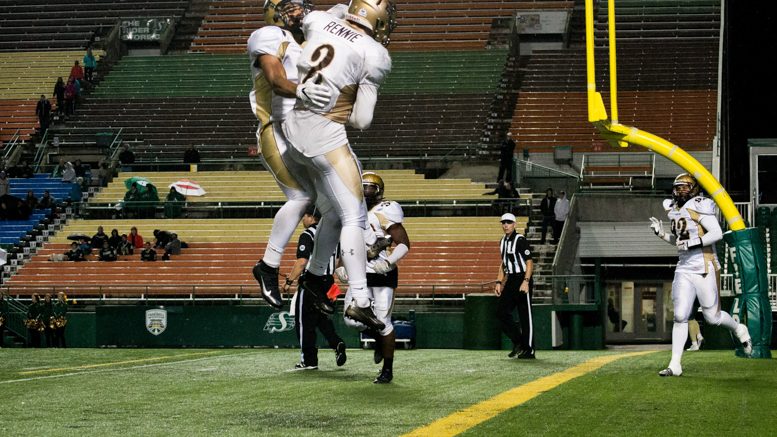 Houston Rennie #2 hugs Jayden McCoy #7. Rennie and McCoy will be playing the U Sports East West Shrine game in May. Photo by Chantal Zdan

Jayden McKoy and Houston Rennie have been selected to represent the West at the 2017 U Sports East-West Bowl on May 13. In the last two seasons, David Oneymata (2015) and Geoff Gray (2016) attended the East-West Bowl.

Onyemata went on to win the J.P Metras Trophy as the best down lineman in Canada, and was selected by the New Orleans Saints in the 2016 NFL draft. Gray was nominated for the J.P Metras trophy and has earned himself an NFL pro day on March 30. Senior defensive lineman Evan Foster was named the defensive MVP at the 2016 East-West Bowl in Montreal.

The Winnipeg native has earned himself a place in the Bison record books despite only playing three seasons. He is 14th all time in tackles with 115.5, 6th all time in interceptions with ten, and 3rd all time with 208 interception return yards.

McKoy’s explosiveness and vision in the secondary has made him a key member of the Bison defense. McKoy’s speed will be on display for many scouts at the East-West Bowl and he will hope to raise his stock for the CFL draft.

Rennie, also in his third year, made the move to linebacker and has had a career year. The six-foot linebacker racked up 37 total tackles, good enough for 15th in the Canada West. Rennie has made 56 total tackles in his three-year Bison career.

The East-West Bowl includes representatives of all 27 member schools and is for players who are eligible for the upcoming CFL draft. A national committee of U Sports and CFL head coaches selected the players that were nominated by their respective teams. The Bowl is a chance for players to showcase their talents to an array of CFL scouts and coaches.

The West and East teams have traded victories during the past four years, with each team winning twice. The West won 29-14 in last year’s edition at McGill.

The East-West Bowl will take place on May 13 at TELUS-UL Stadium at Laval University with an 11:30 a.m. kickoff.