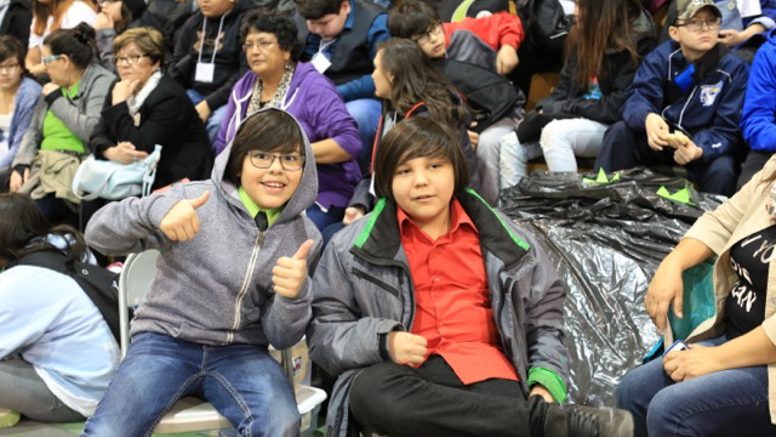 On March 9 and 10, the University of Manitoba hosted the 15th annual Manitoba First Nations Science Fair.

The fair featured projects from students ranging from grades four to 12, and consisted of visual displays, live experiments, and written reports. Students travelled from all over Manitoba to compare projects, and are all from First Nations schools. Each one of the hundreds of students attending were given either a bronze, silver, or gold medal for their work, and four projects will be chosen as winners.

The fair, which is presented annually by the Manitoba First Nations Education Resource Centre (MFNERC), hopes to inspire children in First Nations schools to take part in, be inspired by, and enjoy the pursuit of scientific discovery. The program was founded by Rudy Subedar, who now works for the University of Manitoba in the University 1 transition program, but was the science and technology program manager for MFNERC for 15 years, and founded the First Nations Science Fair in 2002. Subedar believes that the science fair is crucial not only for the sake of individual students’ research, but also for communication and solidarity between schools.

“What this program does is it engages more and more of First Nations students into science and technology, and by hosting the science fair itself, it brings the students together from different communities,” Subedar told the Manitoban.

“Listeners of the Earth”

The fair’s theme this year, “Listeners of the Earth,” was meant to inspire students to pursue a project that connected their research to their environment. This practice, Subedar mentioned, is a central component of Indigenous culture.

“Science and the scientific process, and all of the things we’re trying to teach in science, have been part of First Nations culture for as long as they’ve been living on this land,” Subedar noted.

This sentiment has become especially relevant in recent years, with more and more scientists in Canada using Indigenous oral tradition to supplement their research. Just last year, a study connected ancient DNA collected from sites in Prince Rupert in British Columbia to their descendants living in the Lax Kw’alaams and Metlakatla First Nations in British Columbia. The researcher’s findings – particularly that the Metlakatla First Nations had lived in the area for thousands of years – were not news to people living in the area, as these facts had been the subjects for traditional oral stories passed down through generations of Metlakalta people.

Subedar added that community-building programs like the Manitoba First Nations Science Fair help Indigenous students bridge that connection between “Westernized” school plans and their own cultures.

“So in that way, it’s a really good fit,” said Subedar.

“Even though in our school system, it might not seem that way, because of the western perspective on how we teach science, and what we teach about science and the history of it, this gives the Indigenous students an opportunity to see that in fact a lot of the knowledge and the traditional practices that existed within their communities and their culture is no different from what it is we teach in a science classroom.”

Subedar believes that statistics like these are the obvious result of Canada’s long and dark history of colonialization and marginalization of First Nations people.

“First Nations people are underrepresented not only in science, but in a lot of places in Canadian society, simply because of systemic racism and the fact that they are a marginalized population that live in the margins of society. Period. That’s it.”

A project with a personal touch

Present at the Manitoba First Nations Science Fair were Kateri and Rochelle – grade 9 and 10 students respectively from St. Theresa Point high school – who were kind enough to explain their project to the Manitoban. Their experiment, which was presented with the help of a display board and an iPad, was on the positive effects of pranmaya yoga exercises on blood pressure levels.

Rochelle said that her favorite part of the project was hosting a “mini yoga class,” and that she even got her family involved.

“I even tried it on my mom,” Rochelle explained, proudly presenting photos of the yoga sessions on the iPad.

“And it worked for her too. After she finished, she said she felt so much better.”

The sky is falling: Meteor breaches Russian atmosphere, asteroid passes by Earth all in same day