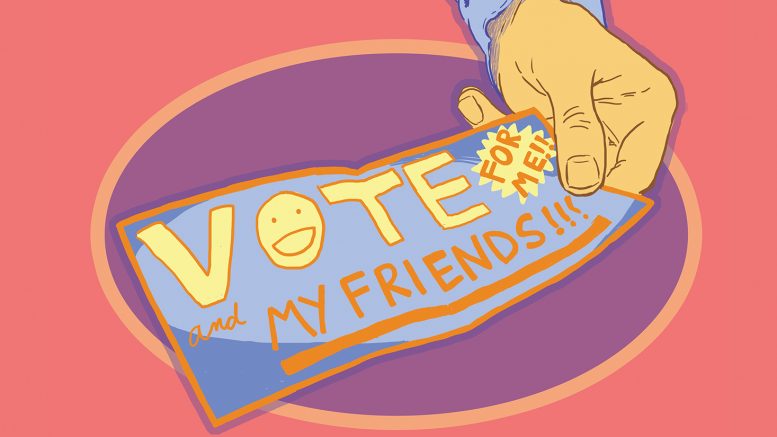 Briefly said, the state of student politics at is a failed one. First and foremost, its democratic process is defunct to the point of it being a laughing matter. Not only are elections for student officials dismal affairs – with more emphasis being placed on putting forward good angles for a camera-friendly campaign than policy content – but they also attract voter margins that couldn’t authorize leadership to run a roadside lemonade stand, let alone a multi-million dollar student organization.

UMSU’s highest-ever voter turnout fell at a mere 23.7 per cent, where it tends to hover in recent years. In the past, lows like 7 or 12 per cent were more typical.

Consequently, the student union is being steered by executives who are empowered by only a fraction of the student body they are meant to represent. There lies no valid claim to representation when less than a quarter of constituents show up to vote. Even less vote for the individuals who assume power. In student elections, results are ultimately artificial; the same people run in similar slates, and the winners end up being whoever has sat on the most faculty and departmental councils – in short, whoever has the most connections.

Democratic only in name, student politics is also as superficial as the shallow end of a kiddie pool. Lacking accountability because of a politically inactive student body, the stakes for executives are minimal and tend to land in the range of their own concerns. And while lacking a legitimate majority mandate, UMSU is powered by the tyranny of the self-interested. Rather than operating on a robust advocacy model, campaign platforms engineered by wannabe career politicians often capitalize on minor issues and matters surrounding the “student experience,” intent on avoiding the big questions.

The times are calling for improved access to post-secondary through lower and even abolished tuition, a weightier distribution of funds to the academic poles of campus, and a paradigm shift toward humanistic education rather than the current corporate model: all things that require advocacy with a resounding voice and an iron fist to match.

Student election campaigns, on the other hand, tend to revolve around balanced budgets, improving campus parties, and minor commitments to incremental reform. Meanwhile, governments and university administrations are hunkering down on austerity agendas, be it in the form of clawbacks or increased reliance on the private sector to produce public goods. With no radical counterproposals in sight, prospective executives instead repeat the oft-heard promise of guaranteeing a “voice at the table” during budget negotiations. Student politicians are bringing water pistols to a gun fight, be it unknowingly or through utter indifference.

Even when UMSU has bared its teeth in the past, the most notable instances have been a petty spat with the Canadian Federation of Students or against its own interests, as when UMSU initially refused to comment on the university administration issuing sudden budget cuts. Indeed, UMSU and the CFS continue to this day their juvenile bickering, taking turns displaying shock at the other’s actions, and the union so far has failed to stop or even stall the ongoing budget reductions to academic units on campus.

It took UMSU weeks of deliberation before it could reach a stance on the UMFA strike. While the student union remained in talks with the administration during this period to ensure student needs were being addressed, their demands would have been sorely defanged as the executives had failed to procure a mandate from the student body regarding the strike until it was halfway over. It’s easy to see how this has a crippling effect on leveraging power, for any statements UMSU could have made toward the administration would be shadowed by the fact that the union was mired in confused disarray.

It was not clear what position UMSU was to have on the strike – violating a historical principle of union solidarity – and discussion surrounding the topic was flush with red herrings. Discussions were run aground with talk of short- and long-term benefits, who the strike was impacting most, who had the most to lose from the strike, whether it was the place of UMSU to even get involved, what the most strategic decision for UMSU was, and other such babbling malarkey.

This conduct illuminates the malaise that plagues student politics. Low-stakes issues take the spotlight because those in power have no need to handle uncontroversial events with delicacy, and so it is easy to run with them and garner quick credentials. High-stakes issues, on the other hand, end up bungled because the payout for issues like tuition reduction or budget negotiations is a long-term game, resulting primarily in benefits for future students. Those endeavours, holding no prospects for padding a curriculum vitae or promotional material for executive re-election, are either left high and dry or treated with such caution that action on the issue looks like inaction.

While the CFS has long been accused of being NDP stomping grounds, essentially acting as politicking boot camp for future party hacks, so too has UMSU become a magnet for small-time party politics. An executive this year, vice-president internal Adam Pawlak, has resigned at his post in order to take on government work with the Manitoba Progressive Conservatives, while last year vice-president student services Jessica Morrison took a leave of absence before resigning in order to work in Ottawa for the federal Liberals.

Executives’ connections to establishment political parties conflates student interest with the interest of the party. This is ethically dubious, given student representatives are meant to answer to the constituents who elected them, not party brass. Executives having ties to political parties like the NDP, Liberals, or Conservatives blurs the line between where representatives stand on issues and problematically moulds their vision for the student association they are charged to lead. Nor is such an arrangement conducive to the uncompromising, unapologetic advancement of policies that benefit students – especially when one of those parties assume government at the provincial or federal level.

In order to resurrect student politics, numerous radical steps are in order. Firstly, the spirit of democracy needs to be instilled in the student body. This means getting students to participate not only in the annual UMSU elections, but in town halls, consultations, and the regular goings-on of UMSU council. The union must become more invested in educating, agitating, and organizing the student body. Otherwise, union executives will continue to be chosen through pseudo-election, and its declining advocacy role is doomed to become terminal.

The revival of mass student participation is also vital for curbing the current shallow, self-interested bent of union politics. Only through weaving a tighter-knit social fabric between elected representatives and constituents can the work of the union become centered on the pursuit of goals more meaningful than making campus pretty again.

Without major and radical restructuring to its existing incentive structures, student politics at large and UMSU specifically will only continue on as an institution that is symptomatic in its approach. The world is undergoing spastic changes with political turmoil to follow. The status quo is untenable.

Ultimately, a disregard for the underlying disease that afflicts student politics – apathy, political disengagement, and shrinking advocacy functions – will be fatal to progress.