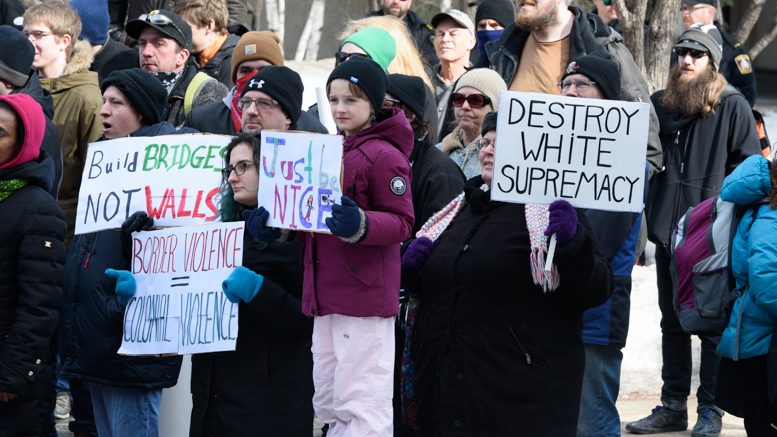 A small group of protesters was confronted by a much larger crowd of counter-protesters outside City Hall Saturday.

The original rally, organized by the smaller group, was meant to oppose a federal Liberal motion that would condemn all forms of religious discrimination including Islamophobia.

Motion 103 was introduced in Parliament by Mississauga MP Iqra Khalid last December and debate on the motion began in February, not long after a mass shooting at a Quebec City mosque in January left six men dead.

If passed, M-103 would “recognize the need to quell the increasing public climate of hate and fear,” request that a government committee “develop a government-wide approach to reducing or eliminating systemic racism and religious discrimination, including Islamophobia,” and collect data on hate crime reports in Canada.

Although it was difficult to tell, nearly 15 protesters attended the Winnipeg March for Freedom, Liberty, and Justice, organized by the Canadian Coalition of Concerned Citizens (CCCC) as part of a nationwide day of protests against M-103. Some protesters carried inflammatory signs and one wore a slogan on his back that read “Stop Sharia Law” next to an image of the Canadian flag.

The small group was dwarfed however by a much larger crowd of just over 200 counter-protesters waving Indigenous and Pride flags and carrying signs with slogans such as “Refugees Welcome.”

Counter-protest organizer Omar Kinnarath said he coordinated the opposing rally to respond to what he sees as a growing far right movement in Canada.

“Very far right or alt-right groups have been coming into Canada and this was kind of the first national action by any group, so [we] felt the need to draw the line in the sand early,” Kinnarath told the Manitoban.

“We found out about this rally from our anti-fascist contacts in Toronto and then we organized it right away,” he said. “It’s fantastic. Being a Muslim myself, it’s great to see all the support from everyone, from all sides.”

There was a large police presence at City Hall, although no violence broke out between the groups of protesters. 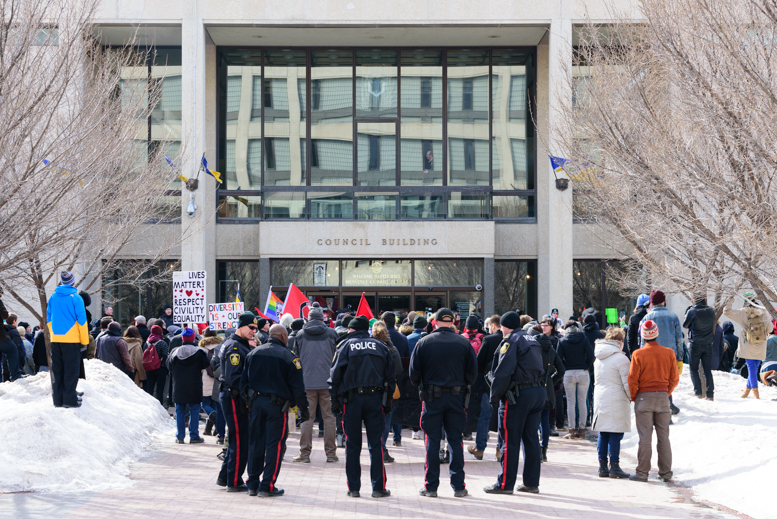 For over an hour, counter-protesters shouted at the small group of protesters and argued over a range of issues with them, including Islamophobia, Indigenous rights, residential schools, and Donald Trump, among other topics.

One of the protesters clad in a red “Make America Great Again” hat, who would only provide his first name (Nicholas), said he joined the demonstration because he found it interesting.

According to a release from the CCCC, the protest was organized – among other reasons – to tell the government that M-103 is not needed, as “Canada’s existing laws are sufficient.”

“It is not government’s role to single out a specific religion or provide that religion with special privileges,” read the release published on Mar. 3.

M-103 is not a bill therefor it cannot become law. If the motion passes, it will not place any legal restrictions on freedom of speech in Canada. 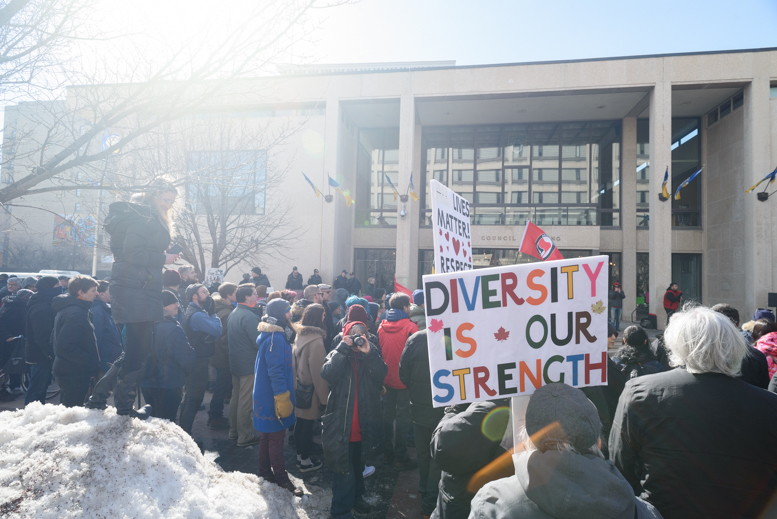 “Diversity is our strength.” Photo by Miguel Yetman

“I think it’s important to talk about what’s been happening and what happened in Québec earlier this year,” Baloch told the Manitoban. “The hateful rhetoric that’s going around, even from the establishment parties […] is not justified.”

“People need to be informed about the hateful rhetoric that’s coming up,” he said. “There was even a person that was saying ‘hate speech doesn’t exist’ and I was appalled by it.”

A similar protest in Montréal Saturday erupted in violence as nearly 100 anti-M103 protesters clashed with counter-protesters.

The Winnipeg protest and counter-protest ended at around 12:30 p.m.

The truths behind Kitchen Confidential

More than a hot drink