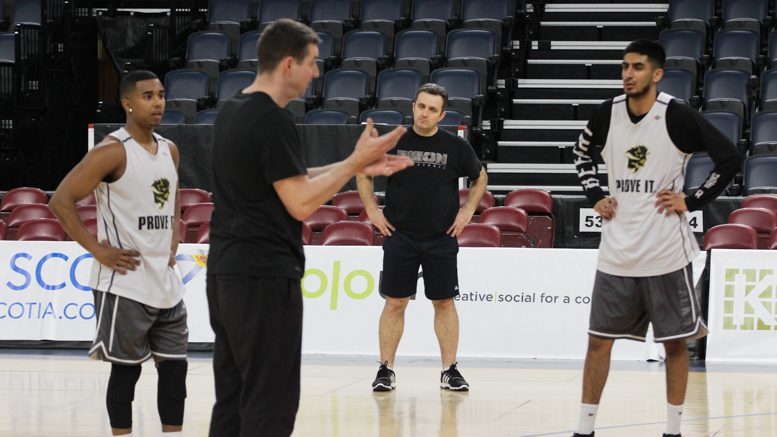 When Kirby Schepp took over head coaching duties of the Manitoba Bison men’s basketball team for the 2009-10 season, he was tasked with guiding a program that hadn’t seen the postseason since 2004.

It didn’t take long for the former standout coach at Sturgeon Heights to right the ship, as he guided the Bisons to the playoffs in just his second year at the helm, doing so with primarily local talent – players that he’d had the opportunity to either coach or see develop during or after their high school years.

Through his first eight seasons, Schepp has led the herd to the playoffs five times and he continues to prove that developing homegrown talent and trusting the process can lead to success.

“It’s part of our philosophy that the core of our team is going to be local guys, and we’ll continue to do that. We’ve been fortunate in the last little while to be able to recruit some of the best local guys,” Schepp said.

Local players such as Jonar Huertas, Kevin Oliver, and more recently Amir Ali and Wyatt Anders have all left their mark on the program in recent years, due largely to the fact that Schepp brought out the best in their games. He believed in them, knowing they would fit a role on his team, and as the years went by, each individual’s development increased.

Breaking down the local talent

The assortment of Winnipeg high school graduates came to Manitoba under different circumstances. Basi and Jewell, for example, weren’t highly recruited. Schepp knew what they could do though, and a few years later, Basi – a Sturgeon Heights grad – became one of the best shooters in the conference and a two-time co-captain. Jewell – a John Taylor alum – developed his post-up game and became a tough matchup inside.

For Omoerah and Nitychoruk, patience was the key. A standout from Grant Park, the former had a stint with the herd early in his university career, but lacked the maturity to balance school and athletics. The latter was highly recruited coming out of St. Paul’s, but chose to attend Lakehead instead, earning a trip to nationals with the Thunderwolves along the way.

Fast forward to 2015, and a more mature Omoerah and Nitychoruk both found themselves a spot on Schepp’s roster, providing invaluable leadership and strong two-way play.

“I like being in my community, I love my city, I love everything that has to do with Winnipeg, so I wanted to really support it here with the U of M program.”

Alleyn and Irwin were both highly touted recruits coming out of St. Paul’s in 2013-14, while Wagner was arguably the most sought-after prospect in the province this past year coming out of John Taylor Collegiate. All three chose to stay home, and have reaped the benefits. This season for example, Alleyn was named a Canada West All-Star, while Wagner was named to the All-Rookie Team.

The proof that honing in on local talent has been evident, specifically over the past two years. In 2015-16, the herd made it all the way to the Canada West Final Four, and this past season, they earned a trip to nationals for the first time since 1986.

For Schepp, it’s all about trusting the process.

“We’ve been fortunate that those guys that have stayed have bought in. Their work ethic has been outstanding and we’ve managed to keep that culture up and keep getting better each year,” he said.