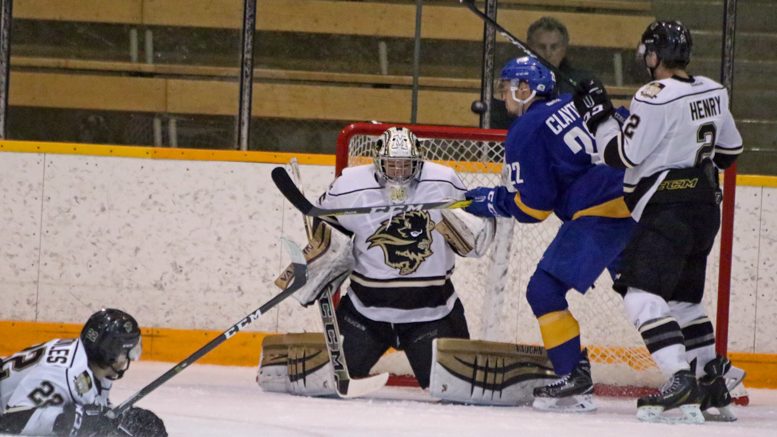 It was an average Thursday for Bison men’s hockey goaltender Byron Spriggs, until he got a text from their trainer, Shane Carson.

“Charlotte’s goalie came in but the gear didn’t,” the text said. It was no longer an average Thursday for Spriggs.

The third year netminder had the opportunity to participate in the morning skate with the Charlotte Checkers of the American Hockey League (AHL) before their tilt with the hometown Manitoba Moose. That enough would have been a cool enough experience for Spriggs, but it got better.

“As I walked off the ice to get to the change room, I saw an equipment guy stitching up a name bar for me,” he said. “I remember going ‘what’s that for?’”

That equipment guy was stitching on Spriggs’ name on a Checkers jersey because they needed a backup goalie for the night.

“I jumped all over it, I was pretty euphoric to get a text from their GM,” Spriggs said. “It was pretty surreal to be in that environment with them.”

The whole experience was eye-opening for Spriggs: he got his own stall with his equipment and got to sit on the bench with the team.

“The AHL is only one step down from the NHL so you have a lot of good players in that dressing room,” he said.

“It was a super great experience just to sit on the bench with them, seeing the energy that they have. Hearing things said on the bench that you would never really hear when you’re up in the stands.”

Spriggs even got to sign a contract with the Checkers, of course making sure it did not affect his U Sports eligibility.

“It’s called an amateur tryout contract, so obviously there’s no money involved,” he said. “Mike [Sirant] and I made sure we followed the steps, making sure I was still eligible for next year. I should’ve asked for a copy of it.”

The story of Spriggs is not the first time we have seen a U Sports goalie getting that kind of pro experience. Matt Hewitt of the UBC Thunderbirds suited up as the backup for the Vancouver Canucks in a game against the St. Louis Blues in October. Ryerson Rams goaltender Taylor Dupuis was signed to an ATO by the Toronto Marlies of the AHL in January.

“There’s always a thought in your mind that it may happen, you think they have a list of guys that they go to, and [Charlotte] has never talked to me before,” Spriggs said. “It’s never happened in my time here, so just getting that opportunity is pretty cool.”

Playing with professionals has given Spriggs some motivation to potentially play professional hockey down the line.

“This was the first year I ever even considered being able to potentially play [pro],” he said.

“You start going through the ranks of junior and now Canadian university hockey, and I’ve been fortunate enough to be able to play high levels of hockey but not where guys are going off and playing in places like the AHL.”

Having been on the ice with some of the guys on the Checkers, Spriggs started to see himself being able to compete at that level.

“A lot of them are really good players, but you’d be surprised it’s not a lot different from what we’re doing at our practices,” he said.

The experience with the pros has also given Spriggs motivation going into next year with Manitoba.

“Going in to next year it’s definitely going to be added motivation,” he said. “Especially in the summer, making sure to bear down and make sure I’m in the gym quite often, and make sure I’m on the ice refining my game. That’ll be my big push to make a name for myself.”

Although he may think otherwise, Spriggs has already made a name for himself this past season with the Bisons. He established himself as Manitoba’s starting goalie, playing in 22 games and posting a 2.82 goals against average and a .913 save percentage. He finished second in the Canada West both in shutouts with three, and wins with 12.

“It’s such a short season, once you get on a bit of a roll it’s easy to keep rolling with that one guy,” Spriggs said. “I felt like I settled into a bit of a rhythm this year, seeing the puck a little bit better. Obviously my d-men help immensely, they made the games really easy for me. I think this year we bought into the whole team defense mentality.”

Despite Spriggs dominating the crease this season, the Winnipeg native had some competition with second year goalie Justin Paulic and redshirt Dasan Sydora.

“Justin and I have a bit of a friendly competition, we’re both good goalies and we like to push each other in practice. Even Dasan too, he’s a great goalie and he was really nipping at our heels this year,” Spriggs said. “All three of us have built a healthy relationship where we push each other.”

With the added motivation going into next season, Spriggs is determined to go on and win titles with the Bisons. There are plenty of players in the Manitoba room who have won championships at different levels, including Spriggs, who won the MJHL championship with the Winnipeg Blues in 2014.

Spriggs is hoping to take that championship experience and go get a national title with the herd.

“It’s one thing to win at the junior A level or even the WHL level,” he said. “Winning in the Canada West is very very difficult. I think we’re settling in as a group, finding our identity.”

It will be a tough task for the Bisons if they want to take out the perennial powerhouses of the Canada West, the Saskatchewan Huskies and the Alberta Golden Bears. Spriggs is optimistic that because this group of guys are so close that they can do special things.

“We’re all best friends,” he said. “We’re in the same mood whether it’s 4 p.m. on a Thursday or 6 a.m. on a Sunday. We’re still chatting and joking, and I think that’s a big part of what our success is going to be.”

The majority of this Bison squad comes from Manitoba, and many of these guys have played together or against each other in years prior.

“It makes a big difference,” Spriggs said. “Playing with someone is one thing but having played against a guy you get another level of respect for him. It’s helped our team to come together and tell some funny stories to look back on.”

Spriggs and the Bisons will hope to build on the success they had in the last half of the season in 2017, and take it to new heights in the upcoming season.