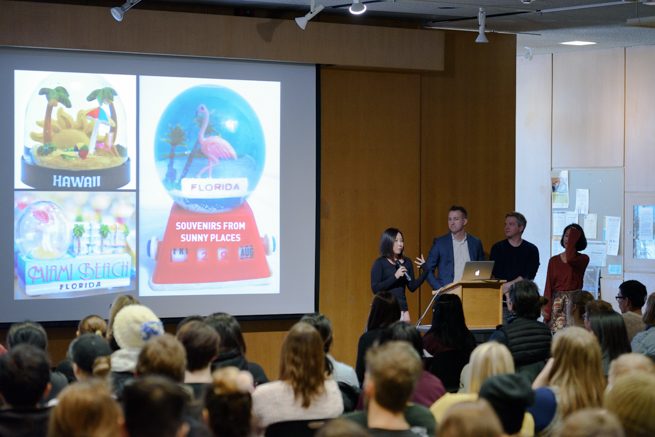 A group of University of Manitoba architecture students have their warming hut on display alongside award-winning designs from around the world as part of the 2017 edition of the annual international Warming Huts: An Art + Architecture Competition.

The six designs selected to adorn the Red River Mutual Trail were unveiled at a U of M faculty of architecture Food for Thought series event Jan. 26. The winners were announced in November.

Warming Huts is an open competition, sponsored by the Canada Council for the Arts, the Manitoba Association of Architects, and StackHouse, that started in 2009 and has received hundreds of entries from around the globe.

In January, designers of the selected entries assemble in Winnipeg to turn their designs into reality and erect the huts on the Red River.

Beyond the three winning designs, which were selected by a blind jury, an additional three – including the U of M project – were selected for construction to sit on the Red River Mutual Trail until the end of the skating season.

The 2017 winners include: “Greetings from Bubble Beach,” submitted by a design team from Chicago; “Ice Lantern,” designed in Nova Scotia; and “Open Border,” designed by a team in the Netherlands. An installation titled Stackhouse, designed by sculptor Anish Kapoor – known for works including Cloud Gate in Chicago’s Millennium Park – is being displayed as an invited submission.

“WarmHut,” designed by U of M architecture students, and a piece titled “On The Rails,” created by Nelson McIntyre Collegiate student Sean Kohli, make up the final selections.

The University of Manitoba team consisted of 40 students and four professors.

The design reflects Scandinavian and Indigenous cultures, while giving its occupants a sauna experience.

U of M architecture student Jessica Piper said the competition is a rare opportunity for students to see their designs created in full scale.

“The most exciting thing about this competition for me is to get hands-on experience in a design-build project,” she said.

“I think that students don’t often get to see their ideas come to life at a 1:1 scale.”

While Piper admitted the international scale of the competition brings a global perspective to the designs, she said growing local support will only make the displays stronger.

“I think the more involved the community and students get in the competition process, the more powerful and exciting it will get,” she said. “It would be nice to see competition submissions not only from international designers and architects, but also from members of the local community.”

Bianca Dahlman, communication lead for the U of M team, called the hands-on experience of building the hut invaluable, adding that competing against an international field only sweetens the pot.

“As a student still early on in my academic career in architecture, I’m wowed by the opportunity to design and compete amongst big name artists and architects from around the globe,” she said.

“If it weren’t for the Carbuncle design-build, many of the students would have completed their degree having only read about wood framing construction and having never actually lifted a hammer,” she added. “There’s nothing quite like hands-on learning.”

Dahlman noted that the U of M’s sauna-inspired project is the first in the warming hut competition’s nearly decade-long run that is actually warm.

“The skaters and strollers of the Winnipeg community can now enjoy a unique sauna space on the ice where they can relax and get toasty.”