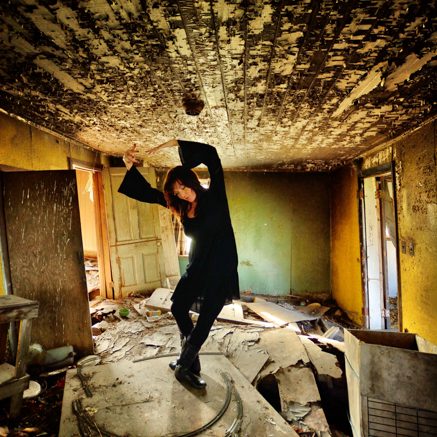 Winnipeg-based singer-songwriter Stacey James will be releasing her first solo album, 11 11, this month with a release show at the Park Theatre on Friday, Feb. 10.

James was previously the lead vocalist and songwriter for both Grooveport and Stacey James & The KiK.

For James, this album reflects her growth as an artist and takes the listener through different facets of life, from heartbreak to introspective self-discovery. 11 11 highlights her musical growth and confidence stemming from her extensive experience with collaborative musical projects.

“As an artist, I have become more comfortable with my authentic self, and my ability to express that to my art,” said James. “I used to write a lot more metaphorically because I was afraid people would hear it and know exactly what I was saying.”

On 11 11, James allows herself to be more vulnerable with her listeners, writing with a deeper sense of frankness and authenticity than she has in the past. She has been writing songs constantly throughout her musical career, whether for the bands she has fronted or for other musicians. Making 11 11 felt like a natural progression of her music career as she takes the bold step of writing and released her first solo album.

“[I had] to put myself back into the different places of my life that inspired the songs,” said James.

Performing, recording, and writing music is a labor of love and, this endeavor took longer than expected, due in part to the death of her live band’s guitarist over the course of recording. Despite this, James stayed strong and pushed on. To convey the emotion of the songs, both during recordings and performances, James has had to relive some of these past – and sometimes painful – experiences.

“There’s this place you can get to as an artist [where] you step outside of yourself and your insecurities and your thoughts. No one else is in that room but you and your own spirit,” said James. “There’s nothing in the air except for you and your passion.”

The album’s name, 11 11, came about during the days leading up to and during the recording process. Ever so frequently, she would see the numbers in different places. Eventually, she decided to name the album 11 11.

“Apparently when you keep seeing the number 11 it’s a sign of synchronicity, that you’re on the right path,” said James.

Stacey James’ album release show at the Park Theatre on Feb. 10. Tickets are available online or at the door. Physical copies of 11 11 will be available on Feb. 10, with a digital release set for Feb. 11. Visit www.staceyjameswriter.com for more information.