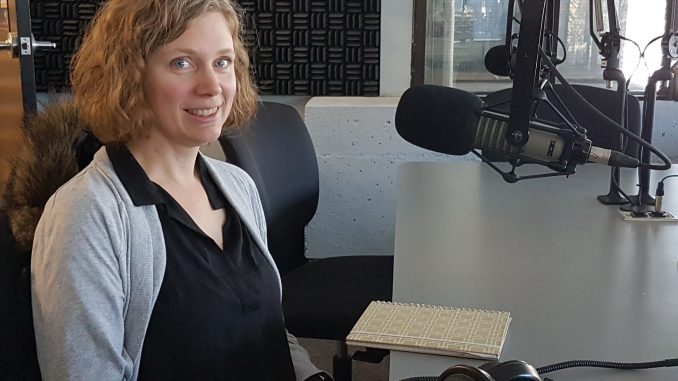 Joy Eidse is a Master’s student in the faculty of social work who’s exploring the role of racial identity in her field. Her thesis is focused on racial identity awareness among white social workers. On Feb. 2, Eidse came onto Grad Talks, our weekly radio show on 101.5 UMFM, to talk about her research path, her Master’s thesis, and what she hopes to work on moving forwards.

Below is an abridged text version of the interview.

Gradzette: Let’s start with what your thesis is about and how you picked your thesis topic?

Joy Eidse: The title of my thesis is “Raising Racial Identity Awareness among White Social Workers: A Narrative Approach.” I’ll try to summarize this succinctly. So I think as a child I was always wanting to help people. I just had a feeling like, ‘Oh, I just want to be a helpful person, I want to take care of people in need,’ that kind of thing. I think that was partly to do with personality and partly to do with the cultural community that I was in – a very religious Christian community that was always about helping people out, trying to reach out, charity, that kind of thing. So that was kind of where I came from as a child.

As I grew older, I started to notice, like you do, that things aren’t all great in the world, that not everything is fair, and so you want to make a difference, and I think kids and teenagers really gravitate towards that. I know my kids, whenever they hear anything bad, they’re just like ‘Oh, what can we do, how can we fix this?’ So, without a lot of education or insight you can go out there and try to fix a problem and see how that goes.

As I became an adult, I eventually moved to a northern community in Manitoba, to a reserve, with my partner, and we spent a couple years there and while we were there – this was prior to any university training on my part – my husband was teaching there and I started to notice that my understanding of what was wrong in society, particularly what I saw in the city of Winnipeg. The street involved population I had noticed before we left […] that would show up at a soup kitchen where I volunteered were primarily Indigenous.

When I went out to the reserve, I discovered from the perspective of the people living there, and I don’t know if they would say it quite this way, but it did seem like the problems I had seen in the city had originated with the history of Canada and colonization. And so I started to look into that and I realized that, I think I had started with the idea that bad people came and did they did terrible things and they mistreated people and so that’s how we got to where we are now. As I was present in the community I realized [that] historically I’m not sure people actually came necessarily with bad intentions all the time. I think there were times that it was pretty blatant, but I think there were lots of people that carried out policies that had been very detrimental to Indigenous people that actually had really good intentions. I’m talking about teachers, social workers, nurses, people who thought that they were doing the right thing. There’s a lot of debate about ‘you can’t know peoples intention necessarily,’ but I could identify with some of those stories. And so I think at that point, when I was living in the community up north, I started to think ’okay, so if people came in thinking that they were doing the right thing, and doing their best to be helpful and the outcome was so terrible, how could I possibly know if all the good things I’m trying to do are actually helpful or not?’ And so it made me a little nervous, and I felt like maybe I should be cautious about what I think I should do to be helpful to people, particularly people who come from communities and cultures that are different than mine. I always grew up with the idea: do onto others that you would have to do onto you, and I thought that would kind of cover things, and I started to realize that may not be the best route.

Eventually, we moved back to Winnipeg and I signed up for the bachelor of social work program at the inner city campus, and while I was there I got all kinds of great input from fellow students, from teachers, instructors, and professors, and readings. But one of the things that really stuck out to me was when one of my Indigenous professors passed out an article by Cindy Blackstock called the [Occasional] Evil of Angels. And she kind of went through the history of social work and all the times that social work had attempted to do the right thing to help people and make changes in society and how awful some of those outcomes were historically. Her call at the end of the article was to social workers presently working in society to say ‘we need to be more reflexive of ourselves, we need to look at ourselves to determine if what we are doing is actually helping and take a good hard look at the data, at the outcomes, at the statistics to give us some input.’ That made sense to me because I had worked in community organizations where you write grant proposals and you are asked to give evidence of how effective your programming was and you need to get feedback from the people that you work with, and I felt that as a whole, if we actually looked at the outcomes in social work and a variety of fields, and those outcomes are not great, particularly for Indigenous and – for lack of a better term – non-white clientele. And so if that’s what we’re looking at for measurement, that’s like hard quantitative data, then something’s not working and we’re actually not doing a great job despite our great intentions.

This is a long route to answer your question, but it was a long journey, honestly, and it’s not something I can say ‘Oh, it was just this one thing.’

G: Do you have a timeline for us too that you could kind of talk about? Like, when you first started noticing and getting into it?

G: In that timeframe, have you seen, based on Cindy Blackstock’s call for action, any action taken – being more reflexive or have you seen some of that in your practices?

JE: Yeah, so I feel what happened as a result of that paper was that when I graduated, I worked a little bit in community development for a while, and it really made me check in: ‘Okay, who’s being impacted, what are we doing here, what’s the bigger picture?’ And I think what’s happening here is – a little side note – often times unless you are in child welfare, most social workers are working pretty isolated, in terms of not working with other social workers. So these days I work in mental health, when I’m at the hospital, there’s maybe two or three other social workers around. Most people are nurses, occupational therapists, doctors, so not everyone is coming with the same lens necessarily. Again, we often have the same intentions, but not coming from the same perspective.

So during my bachelor of social work, we were part of a church organization where we had a home that we had people living with us that were at risk of homelessness. While I was going through my education, I felt more and more as we were engaging with the people that would stay with us, like, ‘Oh,I don’t know if the way that I am engaging with and trying to be helpful is actually being really oppressive to people. They’re here because they need housing and they need housing because of a variety of reasons’ – it could be mental health, could be addictions, could be poverty, could be colonization, really. That was kind of a day-to-day checking-in, and that article by Blackstock impacted me on a day-to-day level to the point where I felt like ‘Okay, maybe I need to be really hands off here until I really get my head around what’s going on and how I might be impacting people.’

The full version of the interview is available on UMFM’s SoundCloud page, under the Grad Talks playlist.

The vulnerability of publishing