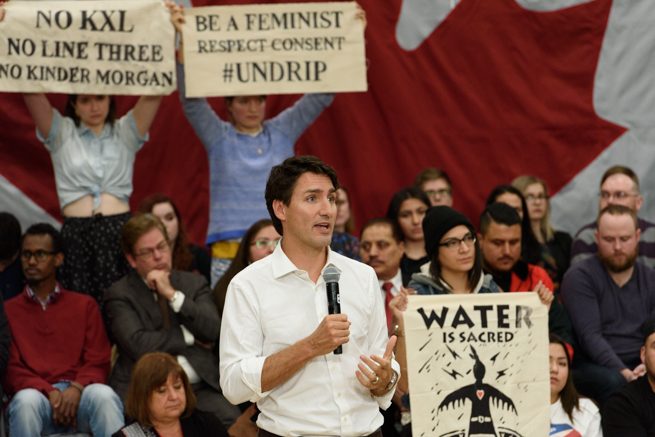 Prime Minister Justin Trudeau faced off with a small group of pipeline protesters at a town hall event at the University of Winnipeg’s Duckworth Centre on Jan. 26.

The interruption came during the Liberal’s response to a concern expressed by an audience member regarding his government’s recent approval of both the Kinder Morgan TransMountain pipeline expansion and Enbridge’s Line 3 pipeline.

The approved pipelines will pump nearly a million more barrels of oil a day from Alberta’s oil sands to refineries in the U.S. and British Columbian ports when completed.

Trudeau heard the concerns about the approved pipelines and their environmental impact from a young audience member not long after beginning the town hall event.

“Given that many countries have drastically reinvented their energy systems to accommodate for climate change – countries like Sweden and Costa Rica are now powered 100 per cent by renewables – and the cost of oil is at an all-time low. And yet, Canada is still approving pipelines,” the audience member said.

“I don’t know if you understand the degree to which you are alienating the young voters and progressives who voted you in.”

The end of the question was nearly drowned out by cheering from many other audience members, some of whom behind and to the prime minister’s right stood up holding signs bearing slogans such as “No KXL, No line three, No Kinder Morgan,” and “Water is sacred. No pipelines” among others. Trudeau repeatedly asked several protesters standing with their signs and interrupting his response with chants of “climate leaders don’t build pipelines,” and “keep it in the ground,” for permission to continue with his answer to the question, which began with a speech on the importance of balancing environmental responsibilities with a productive economy. The prime minister cited pipelines as a safer method of transportation than rail.

As the event ground to a temporary halt, two protesters continued to shout at Trudeau, while other audience members voiced their own objection to the protesters’ methods. In a particularly tense moment, Trudeau recommended the protesters either allow him permission to finish his question, or leave the room.

After the protestors refused, an Indigenous elder present stood up and began to approach the prime minister, requesting a respectful exchange between parties. Trudeau seemed alarmed by the man’s approach and exclaimed, “Stay seated sir, sit down please, you’re going to get tackled.”

Trudeau eventually finished his answer, stressing that Canada must balance renewable, environmentally-friendly methods of accruing natural resources with the need for a productive economy and good job creation. He mentioned the provincial government of Alberta’s agreement to cap oil sands emissions and move to performance-based standards of taxing carbon as steps forward.

Mandalyn Unger, a representative of the group of around 10 protesters made up mostly of U of W students – which she described to the Manitoban as “a grassroots anti-pipeline collective” made up of concerned community members – expressed her disappointment with Trudeau and the event as a whole, referring to it as “a bit of an echo chamber, [with] a lot of copy-paste answers.”

“No real concrete, measurable promises were made, which obviously he had been told to avoid. Our goal wasn’t really to get him to speak the truth, because we knew he wasn’t going to – our goal was to make sure he knew that we knew that he was bullshitting us.”

Though Unger expressed some disappointment with the overall audience reception to the protest, she stressed it was not surprising and further enforces the movement’s goals.

“[The prime minister’s] PR is so on-point, they’re such a polished brand. I feel like people can really become caught up in the emotions of identifying themselves with this young prime minister who presents as being all about change,” said Unger.

“That’s really the battle here, is breaking through that façade and that image, and letting people know these promises are hollow […] he campaigned on the promise that he would implement [the United Nations Declaration on the Rights of Indigenous Peoples] and he’s not only not implemented it, he’s broken it with the approval of the pipeline.”

Following his answer on the recent pipeline approvals, Trudeau faced questions for the next hour from audience members on issues such as reconciliation with Indigenous communities, Manitoba Child and Family Services, Syrian refugees, and Donald Trump, among others.

The event in Winnipeg was the 10th and last stop of Trudeau’s cross-country town hall tour, as Parliament resumes this week in Ottawa.

An archived livestream of Trudeau’s pre-town hall Q&A with the media can be found on the Manitoban’s Facebook page at www.facebook.com/themanitoban

Putting their name on the ballot