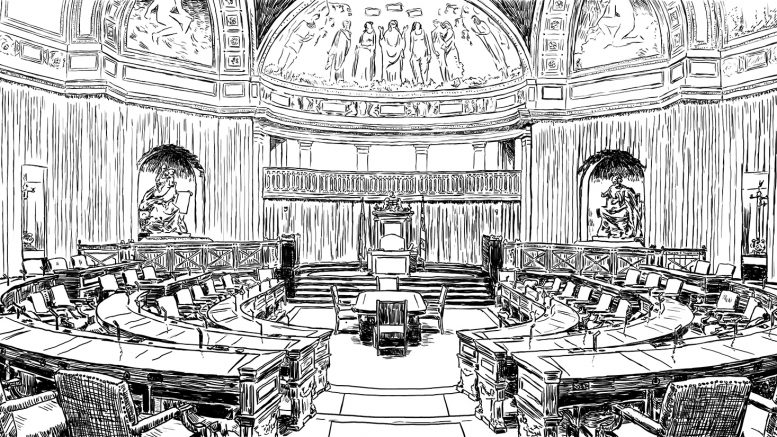 It’s 1:25 p.m. on a November Thursday like any other at Manitoba’s legislative assembly. A bell echoes loudly through the limestone hallways, calling members into the chamber for question period.

MLAs and political staffers make their way to their respective entrances – the opposition NDP and Liberals on one side and the PC government on the other – going over final notes and sticking points for the session.

By 1:35, most of the 57 MLAs are in their seats and the visitors’ gallery is sprinkled with guests. There are only a few reporters apart from myself sitting up in the press gallery, which is a small line of seats positioned directly above the speaker’s throne, directly facing the members’ large horseshoe of desks. The rest of the political reporters at the legislature are listening in by speaker from their press offices.

The session begins with a prayer led by the speaker and then members’ statements. MLAs take turns acknowledging guests they have invited to sit in the visitors’ gallery that day: one is a group of film-making inner-city high school students whose showcase is later that night; another is a Métis rights advocate whose acknowledging statement is the only words spoken in French in the chamber for the rest of the day.

During these 15 minutes of waves and polite applause, I usually take a couple of minutes to admire the room. “Opulent” and “grandiose” are good adjectives for it. Gold-painted murals depicting biblical scenes encircle the members from above, and two large bronze statues, one depicting Moses in Michelangelo’s style – with horns – holding the 10 commandments, the other of the ancient Athenian politician and democrat Solon stand on each side of the speaker’s throne.

When I look back down toward the MLAs who are about to begin a 45-minute barrage of scornful remarks, insults, laughter, and heckling, the Premier of Manitoba, Brian Pallister, enters from a side door, possibly late due to a meeting or an extended lunch break. Pallister gives a small bow to the speaker and walks slowly to his desk at the front and centre of his PC cabinet.

All eyes in the room examine his behaviour as the last one or two members conclude their statements, looking for any sign of vulnerability today. The premier is chatting with his justice and finance ministers, who flank him on either side. I’m just out of earshot and can’t hear whether the joke he told was funny, but both ministers laugh anyway.

At just after 2 p.m. the speaker calls on the interim leader of the opposition, NDP MLA Flor Marcelino, to ask her first question to the government. As she stands, two clocks on either side of the chamber begin to tick down from 45 minutes. The game begins. The NDP are not used to being in this position. Only one MLA in the party was in the legislature the last time they were in opposition 17 years ago.

Reduced from a majority of 35 seats to a meager 14 – now 13 with Kevin Chief’s departure – the NDP are struggling to find a clear strategy to navigate the uncharted waters of PC rule.

The NDP’s transition out of power has not been helped by a spate of crises following their failed reelection. Having lost star MLA and possible party leadership contender Chief and now dealing with sexual harassment allegations against the Maples MLA Mohinder Saran, the NDP is the farthest it has ever been from its heyday of public support under former premier Gary Doer.

To her credit, however, Marcelino does try.

During the three-week University of Manitoba faculty strike, in which Pallister was accused of interfering in negotiations between the U of M faculty association and administration over a wage freeze directive, the interim opposition leader repeatedly demanded in clear form that the government reveal the extent of their involvement.

Marcelino and the NDP education critic, Wab Kinew, took turns day after day grilling Pallister and his finance and education ministers on the PCs’ role in the long and frustrating strike. In return, they received ridicule and a response nearly without meaning the government has repeated ad nauseam: “We were elected by the people of Manitoba to fix this province’s finances and that is what we are going to do.”

The NDP continued their offensive for days – while input from the three Liberal members of the chamber was nowhere to be found – and although they never managed to elicit a meaningful answer from the PCs, they were able to get under the government’s skin.

In the middle of one question period, the premier, visibly frustrated with the claims being yelled from the opposition, accused Mr. Kinew of “peacocking for students.”

Peacocking? I’m not one hundred per cent sure what Pallister meant by that, but it definitely had everyone in the chamber doing a double take. It was one moment of many where the premier’s diplomatic grace faltered while under pressure during question period.

In response to a question on education on another occasion, the premier bitterly brought up misogynist lyrics from Kinew’s past as a musician, seemingly out of nowhere and in sheer annoyance with the member opposite.

Patience is key to any government’s performance in question period. Former Prime Minister Stephen Harper had plenty of it when taking questions from Thomas Mulcair, a skilled prosecutor who threw razor-sharp questions toward the government benches. Our current prime minister has also proven that he has the necessary tact to endure the onslaught of criticisms from both the right and left that his Liberal government has summoned since taking office.

Pallister has yet to master a strategy of patience and calm during debate.

This, however, is new territory for the PCs. They haven’t been in government since the Gary Filmon days of the 1990s and are used to the opposition politics of scornful accusations and demands rather than running the show. And then there’s the heckling. A true staple of democratic debate. Grown men and women, yelling across the aisle at each other like arrogant schoolchildren, is far too common an occurrence at the legislative assembly.

Every party is guilty of participating in it and yet everyone seems so offended by the jeers when they are directed at their party’s benches. Political showmanship is at its finest between 2 and 2:40 p.m. Monday through Thursday. No, the chamber doesn’t sit on Fridays.

As the clocks on the wall slowly tick down to zero, I take my cue from the other reporters to start heading to the rotunda for the daily scrum with the premier.

Mr. Pallister, flanked by a number of young, smartly-dressed staffers, strides toward the podium with confidence. If he’s in a good mood he’ll tell a short joke before the reporters begin.

The scrum is when the actual answers are wrested out.

The small group of reporters at the legislature is an experienced bunch. Getting one of my own questions in is not an easy task when they know the exact moments to interject and prod for the answers they want to hear.

However, today there are only six of us, so getting my own question and follow-up in isn’t too difficult.

After the speech from the throne a few days earlier, it was a madhouse out in the rotunda. The ball got rolling when the head of the Manitoba Federation of Labour came out to decry the speech before it had even finished. Reporters swarmed the premier, his cabinet ministers, opposition members, union representatives, and more the moment they stepped out of the chamber. It was fun.

Today is less of a spectacle. After the premier is ushered away by his staff to get to another meeting or function, an opposition member or two will come out of their caucus room to respond to a few of Pallister’s comments so as to have the last word of the day.

The other reporters are already off transcribing quotes and writing their stories for the day by 3:30. Deadlines are important, or so I’ve heard. Finding myself alone in the grand foyer, catching myself ogling the artwork again, I decide to pack up to head back to the office.

The most recent sitting of the legislature came to a close on Dec. 2 and the assembly is scheduled to return on Mar. 1, 2017. Until then, the government will be working on its next budget, which, if the hints coming from the finance and education ministers as well as the premier himself are true, will feature significant changes to post-secondary education funding from the province.

As the government and opposition parties are still coming to terms with their new roles under the golden boy, what better time would there be to introduce the Manitoban to the game? This is new territory for everyone and for a young, doe-eyed wannabe political journalist like myself, it’s exciting as hell.

Now, more so than in the last 17 years, it is important that students pay attention to what’s happening at the legislature. The goings-on of the chamber and the premier’s office may not be as nail-biting or dramatic as an episode of House of Cards, but the decisions made and debate waged will affect students profoundly.

Leaving the building’s grand entrance to a bustling city in the midst of rush hour, it becomes clear with a brisk rush of November air that 2017 is bound to be an interesting year for provincial politics.

I would pay attention if I were you.