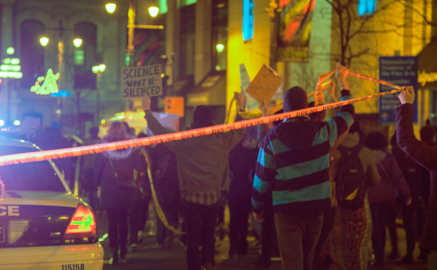 Photo by by Meredith Nutting

Scientists across the United States will march to protest recent anti-science efforts by the Trump administration in what’s being called the “March for Science.”

The march is taking place on April 22, which is already globally observed as Earth Day, and has already gained a large amount of traction – both the Facebook group and Twitter profile have over 300,000 followers. The protest is being called a response to recent alarming policy changes by the Trump administration, including planning to repeal Obama’s Climate Action Plan and having a gag order placed on the U.S. Environmental Protection Agency.

The protest has received the official approval of groups such as the American Society for Cell Biology and the Association of Psychological Science in Washington D.C.

An official statement from the March for Science website declares that it is time to “walk out of the lab and into the streets.”

“Mischaracterization of science as a partisan issue, which has given policymakers permission to reject overwhelming evidence, is a critical and urgent matter,” the statement reads.

“It is time for people who support scientific research and evidence-based policies to take a public stand and be counted.”

In the short few weeks of Trump’s presidency, he has made choices even outside of policymaking that have been seen as red flags in the American science community.

Arguably, the most notable decision is choosing former Texas governor Rick Perry as the country’s energy secretary. Perry, who is replacing nuclear physicist and former MIT professor Ernest Moniz, has a bachelor of science in animal science and once told a nine-year-old child at a voter meet-and-greet that he was “not sure anybody actually knows completely and absolutely how long, how old the earth is.” He’s wrong, by the way – give or take 50 million years, scientists have calculated that the earth is 4.54 billion years old.

Trump himself has a long history of being stubbornly anti-facts. Even a brief look into his many attempts to discredit basic science finds examples of him calling climate change a “very expensive hoax!” and saying that asbestos is completely safe, and in fact has gotten a “bum rap.”

While the march originated in just Washington, marches as far away as New Zealand are being planned. Canadian science groups are already planning parallel marches in solidarity. Canadian non-profit organization Evidence for Democracy is planning a science march in Ottawa, and “March for Science” Facebook events have been made for cities including Toronto and Winnipeg.

Barack did not rock this debate