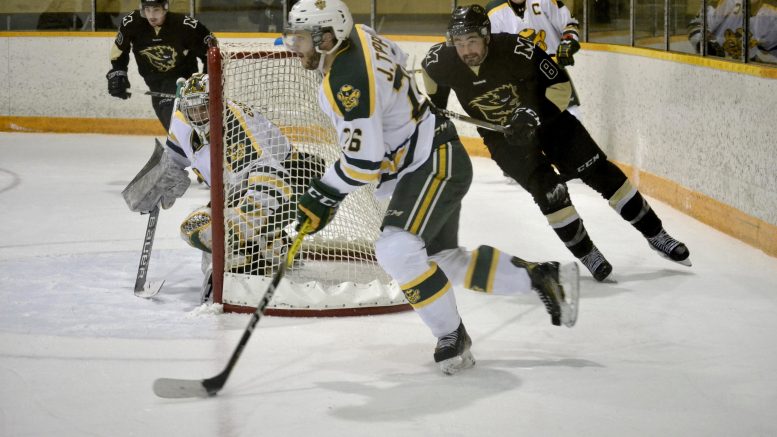 The sixth-ranked Alberta Golden Bears came to town this weekend to play a two-game series against the Bison men’s hockey team. The Bisons lost 4-2 in a rough affair on Friday night in the first of the back-to-back.

Riley Kieser opened the scoring for the Bears when he threw a low shot far side under Byron Spriggs’ pad early in the first. Five minutes later, Remi Laurencelle struck back for the Bisons shorthanded, when he fired a hard slap shot under the glove of Bears netminder Brendan Burke.

Justin Augert put the home team in the lead on the power play after some great puck work. Laurencelle picked up an assist on the play, his second point of the night. The Bisons led the Bears 2-1 after a chippy opening 20 minutes.

Halfway through the second period on a Bears power play, defenseman Jason Fram went high blocker on Spriggs from the point to make the score 2-2. That score line held as the teams went to the dressing rooms at the second intermission.

Ten minutes into the third period, Tyson Baillie put the Bears ahead 3-2. Baillie cut into the Bisons’ zone and roofed a backhand shot over Spriggs. Minutes later, Stefane Leagult pounced on a rebound to make it 4-2 for Alberta. Manitoba pushed late with the net empty, but eventually lost.

“I thought we played real well, we were playing our game and we were playing fast, playing physical,” Bisons head coach Mike Sirant said post game. “It’s a tough loss for us tonight, the effort was there, we competed hard and we’ll bounce back tomorrow.”

Manitoba and Alberta face-off again tomorrow night at 7 p.m. at the Wayne Fleming Arena for their final regular season game.